What to Watch: Cutting Out the Middleman, Customer Data Will Run Fashion Retail of the Future

Thanks to data flows, customers are telling the apparel industry what they want, rather than the other way around.

About You put on a public fashion week in Germany, immediately after the industry version of Berlin Fashion Week in July.

Once upon a time a handful of individuals made decisions about what the general public would wear in six months’ time. But in today’s bold, new, online world, when data is often described as being more valuable than oil, the fashion industry is coming closer than ever to its customers — and mostly through the collection, then use, of personal information.

For Tarek Müller, cofounder of About You, Europe’s fastest-growing online apparel retailer, personalization is key. About You, founded in 2014 as the result of e-commerce experiments at German online giant Otto Group, is a unicorn start-up, valued at more than $1 billion. In the 2017-18 financial year, it saw revenues of 283 million euros, but this year is on track to grow that by around 60 percent, predicting revenues of between 450 million euros and 480 million euros.

Although there are around 250,000 products from more than 1,200 brands available on the site, the company is trying to avoid the “fashion warehouse” business model, a description it uses for larger companies like Amazon and Zalando. About You’s success is likely due to its algorithmic emulation of social media giants. They call it “social e-commerce” and invite brands, influencers, bloggers and other collaborators to contribute content. Eventually this results in a highly personalized site for every single customer; it’s meant to work a bit like your Facebook feed.

There is more personalization coming: In January this year, it was revealed that Amazon had lodged a patent for a virtual fitting room, a software-driven personalization tool that would base outfit suggestions on customers’ social media activity and pictures, their smartphone’s movements and online calendars. In the past, U.K.-based e-tailer Asos also had success with a similar project, inviting “Asos Insiders” onto the site. In a year, the company’s social media following almost doubled, apparently as a result.

This focus on the customer also applies to About You’s marketing. “We’ve been exploring new avenues in marketing lately,” Müller told WWD. “The aim is to increase the focus on direct customer communication. It allows us to enter into dialogue with our target group.”

For the past three years, About You has run an influencer awards show on German-language channel ProSieben; the show captures a large percentage of younger viewership when it screens and is seen as a successful fusion of online and televised entertainment. About You has also bought into, then renamed, a music festival and, with much fanfare, advertised the “#bestjobever,” where users competed to become About You’s “face of YouTube.” This fusion of online and off-line is what the company calls “story-doing,” rather than storytelling. 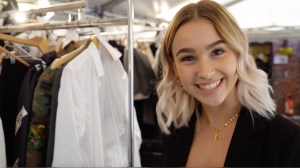 The winner of About You’s #bestjobever contest, Kerstin Schygulla.  Courtesy

This year at Berlin Fashion Week, About You also put on publicly accessible events: eight runway shows and various other workshops and displays. And it’s quite possible that the About You weekend generated more excitement among ordinary German consumers than most of the events on the official schedule. That’s something Berlin has in common with other formerly industry-only, international events, like London Fashion Week. The latter will open its doors to the general public for the first time next month. It is a way for fashion week organizers to generate revenue and relevance in an era when seasonal collections and industry-only runway shows are often overshadowed by more direct customer relations, around the latest exclusive sneaker drop, for instance, or an Internet-savvy influencer in a kooky dress.

About You has more than 15 million active users a month, 5 million active buyers and 75 percent of its traffic comes from mobile devices. What Müller only alludes to is that all this, plus the various events the company organizes, most likely also allow it to gather better and more personal data about customers’ likes and dislikes. This can then be used to improve and scale up About You’s all-important personalized experience. “The better About You understands its customers, the less interesting other retailers are to them,” Müller said. “I think we are still only at the very beginning of personalization in Germany,” he argued.

In the future, your favorite retailer may have its very own “trending corner,” suggests Mario Coletti, U.K. managing director of Nextatlas, a forecasting company founded in Italy that specializes in predicting emerging consumer trends. That idea was first put to the test in July when Westfield London opened The Trending Store in the British metropolis. Nextatlas provided the retail space with information about trending looks — for example, “dystopian fashionista,” gender fluidity, neon or pastel — and stylists roamed the mall’s various retailers, looking for the top 100 items that could be used to create those looks. The whole exercise was carried out in the name of charity, with stores donating the items and the proceeds going to Save the Children. Although results were not measured in financial terms — visitors were apparently more curious than acquisitive — Coletti saw it as a major success, particularly in terms of the attention the outlet got.

But it’s not just a gimmick. “Anything but,” Coletti said. “It was a demonstration about how far artificial intelligence can go to help create a better customer experience and knowing the potential a retailer has to tune this, according to their needs.”

Nextatlas doesn’t track influencers — the trend is over by the time it gets to them, according to the company. Rather, it surreptitiously monitors around 400,000 “insiders who inspire” on platforms like Reddit, Instagram and Pinterest to end up with around 3 billion data points with which to make its pop culture predictions. These then help brands and stores predict what customers will most want over the next six to 24 months.

Nextatlas isn’t the only firm doing this — others such as Edited, based in London, and MakerSights in San Francisco also specialize in this kind of data-driven forecasting. This kind of analysis works best in fashion, beauty and food and drink, Coletti noted. And if you want to go beyond 36 months, current data-driven models can’t help much. “That’s still territory for futurologists,” he conceded. 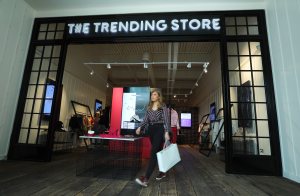 Coletti envisages the idea eventually being tailored to different stores’ needs. Having smaller stores that emphasize the “phy-gital” and only stock high-demand products would benefit both mainstream retailers, which could draw consumers away from online, and larger e-commerce retailers, which get to extend their reach in areas where user growth has plateaued.

Other examples of trending stores include the Nike Live digital-meets-physical concept, where retail stores — such as the pilot Nike by Melrose outlet in California — respond to customer data and stock is configured according to that. Last March, French department store Galeries Lafayette incorporated the “phy-gital” into its new 70,000-square-foot Champs Elysees branch, too.

“The idea of a ‘store’ will have another meaning in the future,” Arti Zeighami, head of advanced analytics and artificial intelligence at H&M, told WWD. The Swedish fashion chain has been working hard in this area for the past three years, Zeighami said, and several pilot projects have shown great promise. “It’s a paradigm shift,” he said. “We haven’t even scratched the surface with [customer] data yet — we are only just at the beginning.”