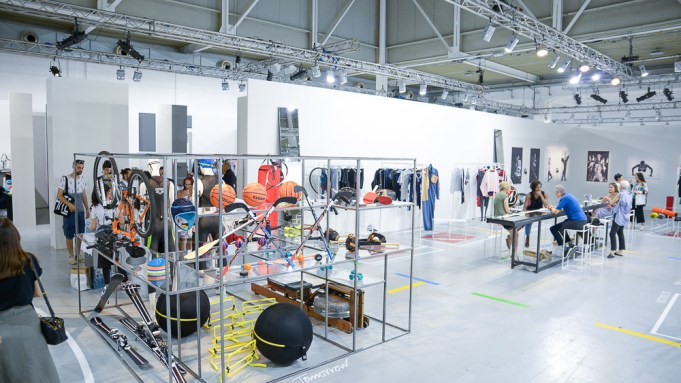 White, light silky shirts side by side with black minimal suits, bags enriched with precious stones, military backpacks and super resistant coats were showcased together at White Man and Woman, running June 17 to 19 in Milan. The fashion and accessories trade fair is leveraging the “man and woman” formula again as key to attract buyers, together with its research in both contemporary and vanguard design.

That seemed to be the only way to deal with a stagnant economic period which affected White as well. The closing numbers of this June edition showed a 12 percent decrease in the number of Italian visitors, while the number of international visitors have remained steady. “We met important international buyers and that was the most important thing in a moment when we need to sound external demand and to revitalize our economy,” said White founder Massimiliano Bizzi.

According to Bizzi, the other key to overcome a difficult situation is to present new, unexpected collections each edition.

On that basis, creativity stood out at White, which counted almost 300 exhibitors. Italian sartorial tradition combined with neo-minimalism and Japanese influences shaped Sabàto Russo’s collection. His young brand Sartorial Monk was noted for the poetry behind each suit: “The textile drives the creative process, I work and study linen, silk and wool and then the design is shaped,” Russo said. “The process follows my need of minimalism and my research on noble fibers.”

The Apulia-born designer, who lives in Italy after a career spanning 20 years in the United States, presented a black-and-white men’s and women’s collection of light, fluid and sophisticated clothes. Russo completed it with a fragrance scented with Cuban tobacco notes, which is “dedicated to a no-age and no-gender public,” said the designer.

A special area was dedicated to the Veneto, Italy-based brand Momonì. Creative director Michela Klinz was inspired by an uncommon London exhibition, which put together musician Patti Smith’s black and white Polaroids and photographs by painter Vanessa Bell — Virginia Woolf’s sister. A free, offbeat woman was at the center of Momonì collection, designed for dynamic and multitasking women. The main elements of this brand, which Klinz founded with her husband Alessandro Biasotto in 2009, are printed textiles. This spring collection features floral and garden-like designs mixed with optical rows.

Southern Italy Industria D’Immagine featured two of its brands: Roberto P. Luxury and Francois Martin Cross. Roberto P. Luxury presented a capsule collection focused on a dandy man who loves refined details and sartorial clothes but at the same time likes to defuse them. Each collection featured an ironic fil rouge which this year was fish — printed on shirts, jackets, trousers and also shoes in order to offer a cohesive collection. Francois Martin Cross is dedicated to fashion addicts instead and focused mainly on black-and-white styles.

Military wear could be found in some collections as well. California-born designer Justin Gall, now living in Rome, presented his “Unborn survivor” collection: “There’s a word in my head to describe it, and that is futuristic” explained Gall, “but it is also about natural wearing” and versatile clothes.

Shirts printed with photographs from World War I, backpacks and overcoats reminiscent of battles associated to the digital and technological prints come from “the idea that you have to go through darkness to see the light” added Gall.

A new interpretation of military wear was displayed at Front Street 8. Vintage military looks were revived by joyful prints or hand-painted by Italian artists, while other items were embroidered. The aim is to make military wear become fashion and attractive to women, explained designer Mauro Russo.

Italian shoe producer Fragiacomo celebrated its 60th anniversary by asking journalist and illustrator Fabrizio Sclavi to reinterpret the company’s iconic floral pattern. President and ceo Federico Pozzi Chiesa explained that “this is the first step of a new project” updating the brand’s heritage for contemporary designs. Colorful energy expressed through the joyful floral theme was the main feature of the Fragiacomo resort collection 2018.