The U.S. is a country where, more than anywhere else in the world, consumers want to look their best and are prepared to spend serious money to achieve that outcome. While emerging economies in other parts of the world are beginning to adopt a similar approach to style and fashion, the U.S. remains the place where style is paramount, and cost is in many respects secondary.

It is said that clothing is what makes and defines a person. What you wear tells others what you are and makes a statement about your taste, character and individuality. It gives an insight into your nature, whether you are casual or formal, playful or serious, cool or just composed. Whether you are attending a job interview, out on a date or just strutting by the beach, your apparel tells us so much about you at a simple glance. Americans know and understand this, and when it comes to looking their best for the occasion very little expense is spared.

Whilst it is clear that spending on clothing in the U.S. far surpasses that of other nations around the world, there are significant variations even in what Americans spend depending upon whereabouts in the country they are from.

The most recent U.S. Economic Census reveals that while consumers in West Virginia spent an average $2,735 on clothing each year, in Hawaii the figure is just $547. And where Wyoming and Montana residents average more than $2,500 a piece on their annual clothing spend, in New York that spend is just $764 and in Florida $947. JJ Suspenders’ report on American clothing spend reveals more detail about these trends and serves as an illuminating map of spending on a state-by-state basis, as well as offering us some explanation for the evident disparity.

As a market percentage, women’s clothing across the country accounts for 35 percent of total spending and men’s clothing 28 percent, excluding categories such as sports, swimwear, underwear and hosiery. 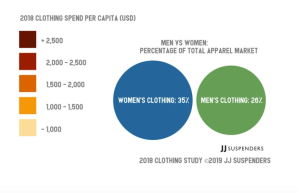 Raw statistics rarely tell the whole story. The fact that less is spent per capita on clothing in some of the bigger cities should in no way be taken to imply that people living in those environments are less conscious of how they look and of the image that they project than those living out in the big country. Some might be inclined to suspect that the opposite might indeed be the case.

What is likely to be a factor in these places is the intensity of supply and demand. Suppliers operating in the big population centers face stiffer competition from rivals and this fact, along with the easy availability of a wide range of products, is likely to have the effect of driving prices down for customers. In other words, the same product may cost significantly less to purchase in Miami or Los Angeles than it would in the Midwest. The JJ Suspenders research would certainly appear to suggest this, with the heavily populated coastal states showing a significantly lower per capita spend than the sparser inland regions.

But the assumption that increased demand and greater competition lead to lower profit margins and therefore to less attractive conditions for selling is a short-sighted one. More concentrated demand means lower transportation costs and significant improvements in economies of scale, thereby negating at least much of the reduction in mark-up. This indeed is why sellers are keen to exploit new markets offered up by the rapid growth of developing economies notwithstanding the fact that goods in such places will almost inevitably be traded more cheaply.

Areas of high population density tend also to be areas of high economic activity. This will attract fashion designers and retailers and the inevitable consequence will be greater competition, as well as a more diverse range of products. Economic realities determine that this too will drive down prices without necessarily prompting any reduction in quality when it comes to output. The Federal Trade Commission asserts that such a competitive environment is beneficial both for customers and ultimately for retailers too.

Meanwhile, fashion-conscious Americans, from the cities and out in the states, continue to set the scene which is the envy of the world, and which the world follows. Style and class beset the streets and the clubs as the U.S. leads the way in the latest, most up-to-date high-quality apparel.

China, itself up-and-coming in the trend-setting stakes, generates more than $100 billion less on clothing each year in fashion sales. Europe, too, is a good way behind.

Manufacturers, retailers and other executives should best leverage the differentials in American consumer spending by recognizing the realities of the vast geographical and demographic diversity, which exists and embracing it, adapting to local circumstances and exploiting markets such as they are. In more remote communities price can be tailored to demand, whilst in areas of high concentration economies of scale can be utilized and taken best advantage of. In a free-market economy price to a large extent sets itself, and outgoings are almost always a contributory factor.

What those who serve the industry should never lose sight of is their own power to influence. To identify and even to steer the trends rather than simply to react to them. The power of advertising is immense, and marketing has become a highly sophisticated art form in the modern world, and not least of course in the U.S. which leads the way in fashion.