The brand believes local markets hold the key to growth as countries worldwide start to ease out of lockdown.

LONDON — All hail the local consumer.

With international tourism frozen for now and demand springing back in parts of Asia, Burberry plans to put an even greater focus on cultivating customers in their home markets, creating specially-tailored ad campaigns, pop-ups, capsule collections and digital outreach programs to get people shopping again.

“We are building bespoke plans for each market and rapidly reallocating resources toward rebounding economies, putting the emphasis on local customers in all regions,” said Marco Gobbetti, chief executive officer of Burberry Group, which has seen its medium-term growth plan derailed by the arrival of COVID-19.

In fiscal 2019-20, revenue dipped 3.2 percent to 2.63 billion pounds, while operating profit plunged 57 percent to 189 million pounds, due to the cost of excess stock and store closures linked to the virus.

As recently as January, and despite the strife in Hong Kong and the brewing coronavirus problems in mainland China, Burberry had raised its revenue guidance, saying it expected full-year revenue to grow by a low single-digit percentage at constant exchange, compared to previous guidance of “broadly stable.”

COVID dashed those hopes, dragging down Burberry’s comparable store sales by 27 percent in the fourth quarter when around 60 percent of the brand’s retail stores were forced to shut. That decline in retail sales compares to a 4 percent rise in the first nine months of the year. 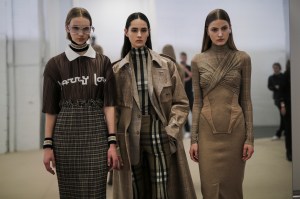 Addressing investors and analysts during a presentation on Friday, Gobbetti said that because economic outlook and consumer sentiment will vary by region in the next months, brands will need to adopt a “highly localized” approach to sales and marketing.

Accelerating Asia is key right now, given that its recovery timeline is ahead of other markets, although Burberry will not hesitate to “dial up the spend” in markets where the company sees positive signs, he said.

Over the past weeks, Burberry has already been trying to engage and inspire Chinese customers at home by live-streaming on the social media and e-commerce platform Little Red Book; creating campaigns exclusive to China, and setting local collaborations with the likes of the digital influencer Mr Bags. Spend by Chinese consumers globally generates 40 percent of Burberry’s sales.

The brand is also gearing up for the opening, possibly as early as this summer, of its new format “social retail” store in Shenzhen, a collaboration with Tencent.

Gobbetti called the new store “a fundamental testing ground” for new modes of shopping, and noted the store will be the first Burberry unit to blend physical with digital retail. The brand was supposed to take its fall 2020 runway show to Shanghai in April, but canceled the event earlier this year and has yet to reschedule it.

Burberry’s first dedicated handbag campaign will make its debut in China soon, and eventually make its way to other markets as they reopen, while new capsule collections are planned for July, and later this year.

Burberry has also been locking its eyes on South Korea, and has “strong plans in place” to capture new opportunities there, having already capitalized on gifting moments such as Children’s Day and Parents’ Day earlier this month. It is also pursuing collaborations with local media and department stores to fire up growth in that country.

Gobbetti said Burberry has been engaging in “one-on-one outreach” to customers in China and South Korea, and will do the same in other markets, while being “sympathetic to the local environment and sentiment.”

So far, the company’s efforts have been paying off, with growth in both China and South Korea now in the double-digits and surpassing last year’s levels. He said the company was seeing “significant traction” in the sale of handbags and small leather goods.

About 85 percent of all Burberry product has been designed by chief creative officer Riccardo Tisci, and his team and accessories have been gaining momentum, as has men’s outerwear, with down jackets and quilted ones selling particularly well in the winter months. 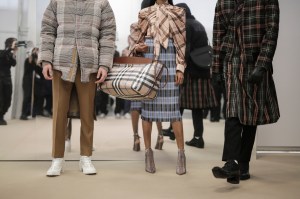 The local versus global conversation has gained steam in recent weeks with brands, luxury investors and industry figures alike arguing that COVID-19 has forced people to shop in a different way. It is also making them rethink how and where they shop, and spurring them to look closer to home.

As reported, Donald Schneider, the founder of a namesake creative agency in Berlin, said he believes that global fashion and retail brands “need to build in many more local layers into their communication and campaigns. In order to reach the customers’ hearts, I would even advise to do special local campaigns for the bigger markets, using local talents, celebs and influencers to communicate in the local language and mindset.”

Looking ahead, Gobbetti said Burberry would further intensify its position as a luxury player and strengthen its digital, direct-to-consumer focus, too. “With wholesale facing significant challenges, this crisis has demonstrated the importance of direct-to-consumer, at scale and particularly in digital, which will be transformational going forward,” he said.

Burberry said it saw double-digit growth in followers and engagement on social platforms year-on-year, including through the crisis, while digital sales have seen a double-digit increase year-on-year with “strong demand” on brand and third-party digital platforms alike. Building on that momentum, Burberry said it plans to debut a leather goods pop-up shop online this summer.

The company is also making changes in the way it operates due to the effects of the pandemic. Gobbetti said the group was closely managing inventory, and would try to stretch out the spring season and shift autumn deliveries to later in the year.

He said the brand has done a lot of work on product assortment, putting together collections “that clients will want to buy as soon as they arrive” on the shop floor. As part of that plan, over the next few months, Burberry will also put the focus on stocking stores and the site with its most commercially successful lines to keep the merchandise moving.

With regard to excess stock, Burberry will rely on discount outlets while other merchandise will be donated to charity, recycled or sold to staff. About two years ago and under pressure from consumers and shareholders, Burberry did away with its practice of incinerating stock to prevent it from slipping into the gray market.

There is no doubt that Burberry’s year ended on a disappointing note, but the brand, like its other luxury peers, has been quick to pivot, making hospital gowns at its Yorkshire factories and sourcing surgical masks for the National Health Service.

To date, the company said it has donated more than 150,000 pieces of PPE to NHS and care charities, funded research into a vaccine developed by the University of Oxford and donated to charities tackling food poverty in the UK.

Burberry has also enacted pay cuts for top board members and managers; frozen merit increases; paid for furloughed staff out-of-pocket rather than relying on British government money; eliminated the dividend payment for the year; focused on cost savings, and girded its balance sheet and liquidity for the tough months ahead.

COVID-19 also hit operating profit, which was set to be flat, year-on-year, but instead fell by 57 percent to 189 million pounds due to adjusting items of 245 million pounds. The items were linked to COVID-19-related store impairments and stock provisions. 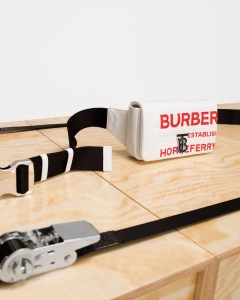 While Burberry stopped short of providing a full outlook for the current year, the company said 50 percent of its store network remains closed and it expects the first quarter ending June 30 to be “severely impacted,” with store closures likely to be at — or near — peak for most of the quarter.

In the meantime, the company said it is leveraging its digital platforms “to forge stronger connections with our customers and have mitigation plans to conserve cash and reduce operating costs, whilst retaining flexibility to respond rapidly and optimize revenues in markets as they start to recover,” the company said.

In a report following the publication of the results, Royal Bank of Canada said management has made “good progress so far” building the foundation to revitalize the brand. However, Burberry is now up against “a less favorable external/competitive backdrop at a time when it has to show the market that it is on track” to accelerate top-line growth and expand margins from fiscal 2020-21 onward.

“Brand heat is improving, but we are unsure that it is strong enough to take market share from the sector winners,” the bank said.

Luca Solca of Bernstein pointed out that Burberry’s 27 percent decline in fourth-quarter comparable store sales was larger than its “soft luxury mega-brand peers, such as Hermès; LVMH fashion and leather goods, and Gucci, but smaller than consensus,” with analysts expecting a 31 percent sales decline.

Separately, Burberry said Jeremy Darroch, independent non-executive director and senior independent director, has informed the company that, due to his other executive commitments, he will not stand for reelection at the company’s annual general meeting on July 15.