In her first interview since joining the brand as general manager in February, Benedetta Petruzzo maps out avenues for further growth.

MILAN — Named after Miuccia Prada’s nickname, the Miu Miu brand has always been a reflection of the designer’s inner musings, allowing her to freely express her creativity. But in time it has grown into something of a manifesto for diversity and inclusion and women’s empowerment. “Sometimes we even say it’s feminist,” said Benedetta Petruzzo, general manager of the brand.

In her first interview since her arrival at Miu Miu last February, Petruzzo highlighted the brand’s “unique positioning and complex identity,” reaching out to diverse groups of women customers, who have formed a sort of cult following for the label. “The Miu Miu women are plural: they are a community, a multitude of women who recognize themselves in their own individuality.” She also strongly emphasized the importance of Miuccia Prada’s sensibility, talent and creativity in shaping the brand.

One of the most recent examples of such complexity is the holiday 2020 ad campaign called Miu Miu Icons, fronted by seven diverse artists who embody women’s polyhedric personalities and talents. The ads were photographed by Mert Alas and Marcus Piggott.

“These are women who have succeeded in different fields, and we are paying tribute to this concrete success, they are diverse role models, icons for women of all ages,” Petruzzo said.

The campaign is fronted by Oscar-winning actress Kim Basinger; cult indie actress and director Chloë Sevigny; Chinese actress, model and former ballet dancer Du Juan, and British actress Raffey Cassidy; they have all appeared in previous Miu Miu campaigns. Newcomers include actor Emma Corrin, who plays the late Princess Diana in season four of “The Crown”; “Euphoria”’s Storm Reid, who made her runway debut in March by opening the fall 2020 Miu Miu show, and musician and actor Jordan Kristine Seamón, who with Sevigny is part of the cast of Luca Guadagnino’s “We Are Who We Are” TV series.

“The campaign represents the spirit of the Miu Miu community of women, empowering and supporting one another, it is not connected to age or a single way of being. The Miu Miu woman is complex and free, and she embraces her contradictions. The brand’s positioning is quite unique in the market,” claimed Petruzzo.

She said she is leveraging “a very precise strategy that relies on staying true to the brand’s DNA and strong identity, which is something that always pays off, we believe, and gives us confidence we are on the right path.”

Petruzzo is tasked with further accelerating Miu Miu’s visibility, “connecting the dots, conjugating in a coordinated and precise way omnichannel and market strategies, product, CRM, marketing and communication, working with Lorenzo Bertelli [who helms the latter two] to achieve the best level of execution.”

Petruzzo, who was previously executive vice president for North America at Kering Eyewear and is a Bain & Co. alumna, joined Miu Miu shortly before the COVID-19 pandemic wreaked havoc around the world. Embracing a can-do attitude, she quoted Miuccia Prada and her husband and co-chief executive officer Patrizio Bertelli, saying “we must be the actors of change,” and “react in a proactive way to the evolution of the market.” Accordingly, she is working to further develop Miu Miu responding to a market that has considerably changed over the past few months. But she believes the brand has the advantage of being less exposed to tourist flows, and sees further growth potential ahead. “Also, its positioning has never been compromised, which only adds to its strength.”

Miu Miu “benefits from a consolidated position in markets that are less affected by tourism and where consumer spending has quickly normalized, such as China, the Middle East and Russia, among others,” she said. Asia and China, in particular, are more mature markets for the brand, with a strong following among Gen Z and Millennials. “The ambition is to strengthen our core markets and consolidate those areas where there is potential to grow,” she observed.

“The pandemic has changed the paradigm. Before the health emergency, there were no boundaries to consumption, with customers traveling and spending locally and abroad. Today, we see a clear correspondence between country of spending and nationality, with a strong focus on local customers,” Petruzzo continued.

Europe was registering strong growth in the first months of the year, she noted, but this was interrupted by the lockdown imposed by the governments. Business has picked up after the reopenings, thanks to engagement with local customers. Japan also continues to be an important market for Miu Miu, she added.

Petruzzo was adamant that “the most important thing is to put the customer at the center, we need to reach her, and serve her” in the best possible way. This translates into an omnichannel structure, she said, while admitting that retail remains the core of the brand’s business to communicate with customers. “The strong relationship with our customers sustains sales even when the store is closed,” she said.

Petruzzo touted triple-digit growth in Miu Miu’s e-commerce business, and the company has long invested in online communication, too.

In October, it unveiled its spring 2021 collection through a video, due to concerns over the pandemic. The show was not staged before a physical audience, but the Italian company invited groups of women to gather together to view the show and be simultaneously connected.

Petruzzo said the video garnered 8.2 million views on Weibo and 700 articles, and the brand was the third most cited out of the coverage of Paris Fashion Week. Miu Miu has been showing its collections in Paris for years.

The initiative was in line with Miu Miu’s efforts to connect women. “We must be a digital, modern brand and this was the occasion for the Miu Miu Club to reunite in a space that was both physical and digital,” she said.

For years, the company has screened around the world its series of Women’s Tales, a collection of short films by international female directors, followed by conversations and panels related to the films and the role of women in cinema, for example. “Tales remain very important. The project conveys a very powerful message on being a woman in the contemporary era, exploring with an emancipated perspective the subjects of vanity and femininity, and that fashion can be a tool to empower women,” she offered.

Petruzzo said sales are well balanced among product categories. Ready-to-wear is “connected to Miu Miu’s identity” and remains “the heart of the brand,” but she was “equally satisfied” with the performance of handbags, accessories and shoes, citing for example the recent success of the Miu Belle, a bag with a feminine allure which represents a modern evolution of the signature matelassé design. The categories “must be balanced for a brand to be strong and resilient,” she contended. 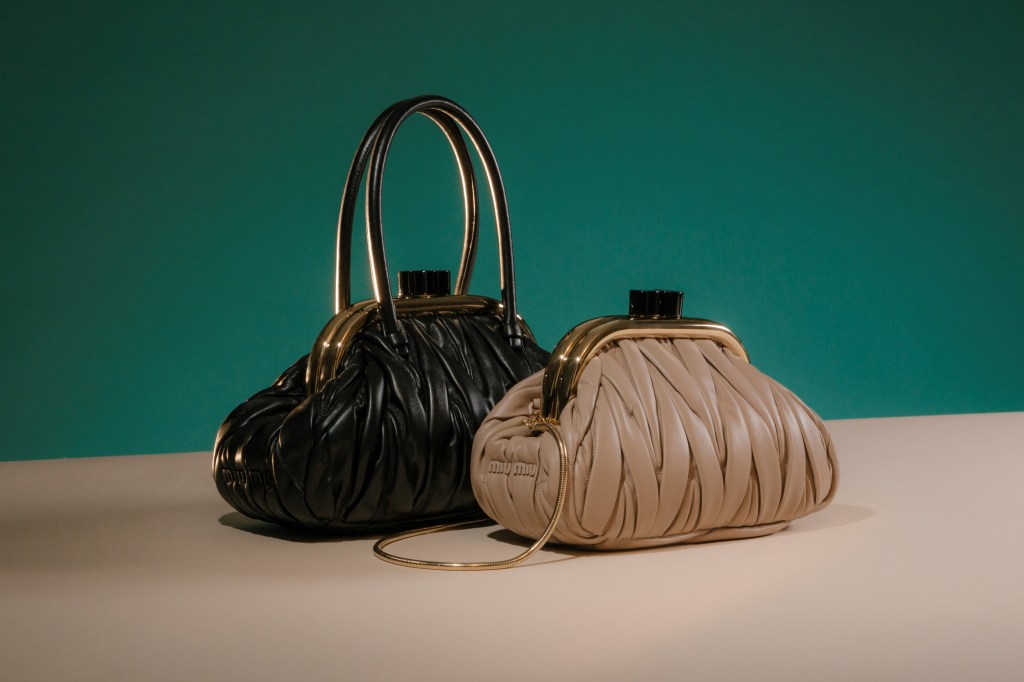 In the first six months of the year, Miu Miu’s sales totaled 131 million euros, representing 14 percent of the Prada group’s sales in the period. As of June 30, the group’s revenues amounted to 938 million euros.

Asked what challenges she believes are ahead, Petruzzo said she does “not like to talk of challenges but of opportunities, and we look at the future with confidence.”

She underscored that the group has not put the brakes on investments, despite the uncertainties of the moment. Strategic pop-ups and initiatives continue. “We believe local activations are important, and we want to keep the stores alive with immersive and special experiences. These are not only commercial but also image events, strengthening brand awareness in the different markets.”

Last year, the company introduced the Miu Miu Select initiative, inviting personalities close to the label, such as Sevigny, Poppy Delevingne and Georgia May Jagger, to select their favorite ready-to-wear and accessories from the brand, celebrating each tie-up with exclusive in-store events in international locations. Petruzzo said two Select projects were just held in China’s Chengdu with singer Lexie Liu, and in Seoul, with influencer Kim Na Young.

As of June 30, there were 157 stores Miu Miu stores globally.

One additional way “to animate the stores” is through the Upcycled by Miu Miu project, which is “more about the identity than commerce,” conveys the strength of the brand’s image, and is in sync with the group’s sustainability goals. As reported, Miuccia Prada reworked vintage designs from clothing stores and markets around the world, dating from the Thirties to the Seventies. She refashioned them by giving them the Miu Miu treatment through the brand’s signature embroideries and embellishments, from ribbons and sequins to crystals, beads and bows and all finished by hand. For this reason, each look is unique.

The collection will initially be limited to 80 Upcycled by Miu Miu dresses. They will be rolled out in December in about 10 select Miu Miu boutiques. “This is a way for fashion to contribute to sustainability, which is at the core of our corporate culture. This is the first we hope of a long series of projects and expresses a very important concept, the fact that it is possible to give a new life to pre-existing garments, extending their lifecycle, renewed through the Miu Miu lens,” Petruzzo said.