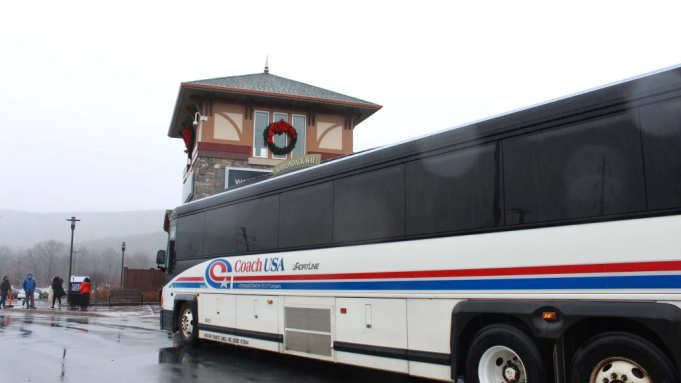 Woodbury Common Premium Outlets is located an hour north from New York City’s famed Fifth Avenue shopping district. So why would thousands of fashion-forward shoppers and tourists trudge through Midtown to the Port Authority to take a bus there?

Time to find out.

It’s a Friday morning and a throng of colored ponchos dot 40th Street approaching the Eighth Avenue Port Authority bus terminal in Midtown Manhattan, indicating two things: it’s raining and tourists are unfazed by the weather. The Port Authority internalizes a brittle energy of travel while externalizing a foreboding warning from locals, “Don’t go there.”

But people do go there, and that includes consumers looking to escape “city prices” without losing access to designer luxury brands. Or, they’re coming from abroad to experience what’s considered the “world’s largest collection of designer outlets” at Woodbury Common.

When it first opened, Woodbury Common covered just 300,000 square feet compared to today’s 910,000 square feet. With recent renovations, it continues to represent “a beacon for customers of the foremost names in fashion wear, tabletop, and an infinite variety of products” as noted in an advertisement in WWD from 1985, the outlet’s inaugural year.

Check out this audio interview for behind-the-scenes insight with business reporter, Kaley Roshitsh.

Today, there are over 250 premium brands at the outlet including Balenciaga, Celine, Dior, Bottega Veneta, Hugo Boss and Brunello Cucinelli among many others. The outlet is owned by Premium Outlets, which is a subsidiary of Simon Property Group.

At the bus terminal’s ticket counter, there’s a passenger in a lush pink fur coat and a Moschino backpack — denoting the taste for luxury at the ticketing line for Woodbury Common, which is contrasted by commuters at the neighboring window of the New Jersey Transit who sport utility backpacks and functional neutrals from head to toe.

Coach USA’s round-trip ticket to Woodbury Common, purchased by over 100,000 eager, deal-hungry Groupon shoppers, also warrants access to a VIP coupon book. But not so fast — this deal is capped at 10 tickets per person; luckily most visitors shop in a tight group. They mean business. Alongside Coach USA, Gray Line partner New York Sightseeing also sends flocks of shoppers to Woodbury Common, which is located in Central Valley, N.Y.

Upstairs at the fourth-floor departure gate, eager passengers wait in a 50-plus person line enduring the smell of spent cigarettes and stale coffee. Although fur-lined parkas were in good company to buttery leather jackets, there were some travelers donned in North Face, but they kept a low profile and rode solo — perhaps locals of the city?

Tourists were easy to spot, and based on the many languages spoken, it was an international set. During the ride out of Manhattan, the preferences of these tourist shoppers were more fully revealed. In a row ahead, a couple slumped into their seats and scrolled through wide-grinned selfies from Times Square. Overheard in a chipper British accent on the bus, “Hope you’re gonna send him an e-mail, we’ll get a free flight.”

It became clear that “designer, discounts, deals” was the underpinning motive for taking this trip, but so too a love of luxury. “She drives a Porsche, he drives a Lamborghini — they’re very wealthy,” the Brit continued, speaking to her accompanying adult children. About 10 minutes later, the same voice let out an earthy “wow” as a too-fast-to-identify silver luxury sports car bulleted past the Coach bus on the New York State Thruway.

And these motives were not weak-willed. Before the bus even lurched to a complete stop, passengers burst from their seats in anticipation of the purchases to be made — and the savings, too (markdowns here can reach 65 percent).

Looping cobbled pathways — lined with bilingual signs — guide shoppers to a few central hubs such as “Market Hall,” with its scents of spice and guac wafting from Chipotle as well as freshly baked bread at Pret A Manger. While on their lunch break, two sales associates (and also friends) told WWD that about 40 percent of shoppers at Woodbury Common are locals, having the advantage of traveling by car and knowing insider deals. Alongside bites of a sandwich, they pointed out which “shopping section” housed which brands and where to grab a map, but not before mentioning it’s a lot to bite off in a single visit.

“You’ll never be able to shop it all in one day,” one of them noted. But that’s the purpose of the sections, which feature monikers such as “Hamptons” and “Saratoga.” It makes it easier for shoppers to remember where they’ve been.

Aside from WiFi across the grounds, ample benches, a food court and a themed playground, David Mistretta, general manager, Woodbury Common Premium Outlets identified further growth. “Just as Woodbury Common has completed a recent multimillion-dollar redevelopment, so too, have leading brands elevated their in-store experience, inspiring shoppers and driving demand both in-store and online,” said Mistretta.

As to which retailers were grooming the most glances during the WWD visit, Calvin Klein, Gap, Levi Strauss & Co. and J.Crew boasted bag ubiquity while Nike drew significant attention at its checkout with a long, wraparound line and bustling in-store activity.

On this Friday, after the peak of the holiday shopping season, the buses were running around the clock. Returning passengers carried not two or three bags, but sometimes four bags in one hand. The likes of brands such as Ralph Lauren, denoted a more contemporary consumer. On the other hand, Michael Kors and other affordable luxury brands were commonplace. A minimal, fashion-forward shopper who knew what she wanted may accessorize with one shopping bag, such as Chloé.

As for the future, the vicinity around Woodbury Common is poised for further growth. The outlet is located at the junction of the Thruway and routes 17, 32 and 6 — which helps to draw in shoppers from across the region. Locals are pinning hopes on the development of more hotels and lodging, stoking dreams of more tourists staying overnight to shop every store in two full days.