The War & Peace capsule will be in-store through mid-October and online at fredsegal.com.

The brands’ new capsule collection is a compendium of Sixties and early-Seventies music lyric patches and graphics, printed denim pieces, studs, stripes, and, of course — tie-dye. The capsule with be available in-store at Fred Segal Sunset through mid-October and online for a limited time at fredsegal.com.

Its War & Peace capsule collection is a celebration of denim and the decade’s undying, irresistible style as a sign of youth culture, rebellion, riders, rock stars and revolutionaries, the brands explained. “A complex era filled with juxtapositions — war and peace, rebelliousness and carefreeness, unpredictability and optimism — the 1960s were a monumental time that was longing for change,” according to Wrangler. 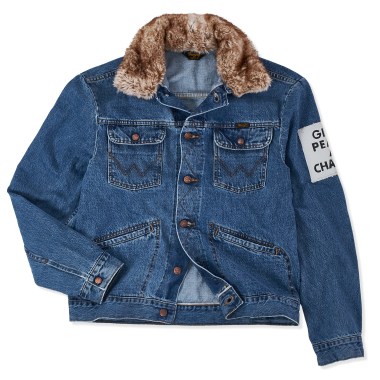 The capsule “represents two distinct yet opposing attitudes through bold statement pieces complemented by fun tie-dyes,” in addition to must-have pieces such as its “Give Peace a Chance” denim and faux fur jacket, or the nostalgic and sexy black-and-white Wrangler bodysuit. Several of the pieces were created in collaboration with Lyric Culture, the brands added, featuring lyrics from songs by The Doors, The Rolling Stones, John Lennon, The Mamas and the Papas and Donovan.

John Frierson, president of Fred Segal, told WWD, “The War & Peace collection celebrates the 1960s, which is the same time that Fred Segal came onto the scene and sparked a revolution in style. This capsule is especially meaningful to us, as it pays tribute to bold and free-spirited creative.” 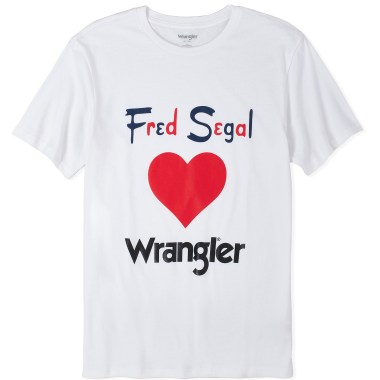 Vivian Rivetti, global vice president of design, Wrangler, told WWD, “The War & Peace 1960s capsule speaks to a complex era of unpredictability and optimism, where Wrangler was worn by revolutionaries, riders and rock stars alike. Revisiting our archives, we reimagined pieces that were seen on some of the biggest names at the time — like our jacket featuring faux fur and a Lyric Culture armband, which pays homage to John Lennon’s customization of his own Wrangler jacket.”

Rivetti continued, “The capsule is one of four that honor moments that have defined who the Wrangler brand is today, and working with Fred Segal Sunset, who has also been an icon in fashion for decades, makes the story behind this collection even more powerful.”

At the Source: Peruvian Manufacturing in Focus