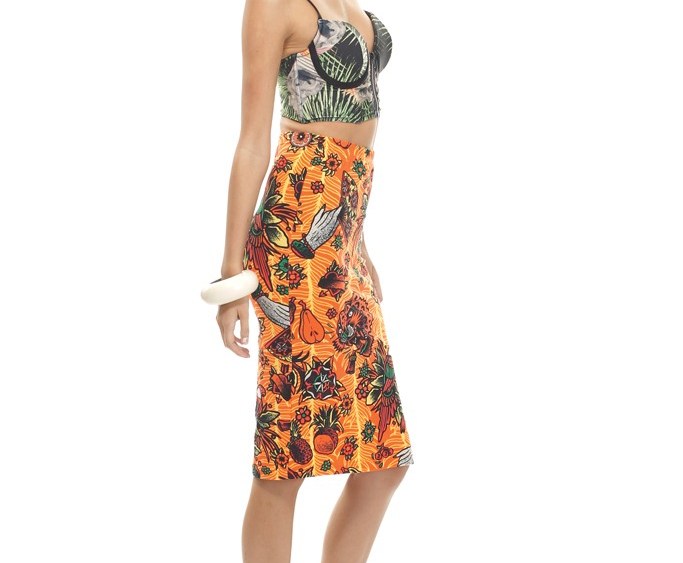 Fashion cycles are just getting faster.

Vendors heading to WWDMAGIC report the influence of fast fashion, as well as persistent uncertainty about the shopping habits of strained consumers, as continuing to put pressure on them to work closer to the season and keep prices down. During what is ostensibly a spring trade show, some brands have even decided they won’t be bringing spring looks at all and, even among those who are, many maintain that the bulk of the business will be done in immediate, resort or holiday orders.

“Retailers are still choosing to write much closer to delivery. It has been a struggle,” said Grace Mead, director of sales at Los Angeles-based Gypsy 05. “It is harder to produce goods, and we are relying a lot more on projections than we had in the past. There are some times when we are left with shortages or with surplus.”

Mead estimated that 40 percent of Gypsy 05’s sales are from orders anticipating deliveries in four to six weeks as compared to 12 to 16 weeks. In the past, she said, only 10 to 20 percent of the business was from those speedier orders. With retailers moving toward shorter delivery times, Gypsy 05 didn’t believe it was worth it to present its spring collection at WWDMAGIC and will wait until the New York trade shows to do so.

“What’s happening with fashion now is it is very fast and, with the onset of stores out there that do fast fashion, they [retail buyers] are looking for the same results with contemporary,” said Mead. “They want very wear-now fashion.”

Alicia Estrada, owner and designer of Los Angeles-based Stop Staring, predicted the majority of the business she will do at WWDMAGIC will be for fall and holiday deliveries in September, October and November. The brand did create a small spring capsule collection available at the trade show, predominantly to target European retailers. Estrada doesn’t expect most American stores to take a hard look at it until later.

“People literally can come to the show and say, ‘What do you have in immediates?’ and I will have about 40 to 50 styles,” said Estrada. She added, “It is a big chunk of our business. Most of the people that are buying immediates are clients that have been with us 10-plus years. They understand how fast we work. These are big dot-coms and, when they are out of stock, they need something.”

Amir Bahar, owner and designer of Toronto-based Pink Martini Collection, which will focus on spring at WWDMAGIC, noticed that the desire for immediates is stronger in the American market than on its home turf. While 90 percent of Pink Martini’s orders from Canadian retailers are booked long in advance, he said about 70 percent of the orders from American retailers are long-lead, down from about 80 percent three years ago.

“The retailers that are staying alive are buying more in-season,” said Bahar. “The Canadians are trying to go that route, but it doesn’t work as well for the Canadians because there are just more options in the U.S.”

As American retailers turn to shorter delivery times, they tend to buy fewer items per order and make multiple orders — and vendors have to get accustomed to that spreading of the risk. At each trade show, this buying strategy often means that brands are doing less overall business, but they feel it is important to keep attending the various trade fairs to grab opportunistic orders. Road work, which the recession encouraged as brands sought to solidify relationships with accounts, remains crucial to snag requests for fill-ins.

Darren DuFine, president of Los Angeles-based brand Scrapbook, explained, “Our retailers typically buy very broadly, as far as the amount of styles. They may buy five to 10 styles on an order, but it will be fewer pieces per style and then they come back to us for reorders and fill-ins on either the same item that is selling or similar items.”

He added, “Our reps are seeing them two or three times between now and January. We have many stores that will place an initial order and then at the smaller markets or Coterie, they may place another order.”

The changes in the market aren’t altering WWDMAGIC’s commitment to calling its August edition a spring show. Chris Griffin, vice president of WWDMAGIC, acknowledged the drift toward immediates, but said, “We still position the August show as a spring show. Certainly, a lot of the bigger brands that are writing bigger programs with larger stores are going to bring  [the first deliveries of spring].”

In a nod to the emphasis on immediates, however, “Both sides have learned to be closer to the market and keep product on hand, so a buyer who comes in and needs immediate goods is going to find it,” he expounded, “as opposed to three years ago when that might not have been true.”

If there are opportunities to be seized by vendors who display clothes from a variety of seasons, WWDMAGIC holds that there more are out there for what Tom Florio, chief executive officer of WWDMAGIC owner Advanstar Fashion Group, dubbed “popular priced” brands that are gaining traction at retailers of all stripes.

“If you think historically about the way the market has worked, the focus has been on designer and luxury brands,” he said. “But clearly, what we are seeing with collaborations is that this contemporary and well-designed space is getting a lot of attention because that’s what consumers are buying. We are seeing brands picked up by department stores in this space. We are seeing more brands here.”

The gravitational pull in pricing is undoubtedly toward lower retail prices. “The traditional contemporary market for middle-price-range apparel has struggled due to the [economy]. Our customer’s mind-set demands fast-forward contemporary trends with a lower price point,” said Charles Park, ceo of Los Angeles-based Offline Inc., owner of the brand Sugarlips. “A top that Offline used to wholesale for $60 to $100 is now priced at $30 to $50. The retail customer is becoming less brand-sensitive and is instead demanding on-trend clothing at an affordable price.”

Scrapbook has reduced its prices 10 to 15 percent from last fall. “We are trying to create value for our customer,” said DuFine.

He explained the brand works to achieve that value by joining forces with Scrapbook’s “fabric vendors, factories, dye houses and wash houses in L.A….to help our pricing stay where it is. They have seen that people can just pick up and go manufacture overseas. They know that is a real option. We’ve had great talks with our supply chain to work on shorter margin — they’d rather work on shorter margin than zero margin.”

For apparel companies producing in China, keeping prices low to remain competitive is getting trickier as labor costs rise. Travis Anderson, ceo of Los Angeles-based Blank Generation, which makes about 95 percent of its merchandise in China, estimated he’s seen prices on Chinese-made items rise anywhere from 10 to 35 percent.

“We’ve become so reliant on outsourcing our product and manufacturing there, and now we are all looking at alternatives — even bringing back some production to the U.S. and the challenges that come with that,” he said. “It’s never a smooth transition.”

While making products in the U.S. sounds appealing, it isn’t always easy. As apparel companies ventured elsewhere for manufacturing, domestic companies along the supply chain shuttered, and they haven’t completely returned to provide extensive resources for every stop along the chain, according to Anderson.

And, without a developed infrastructure, he suggested, it’s difficult for smaller companies to get their jobs done at prices that justify staying in America, given shoppers’ demands for affordability. He concluded, “There is definitely [an opportunity] for manufacturers to do smaller runs and be flexible with growing brands.”