On the eve of LUMINE’s third installment of WWD Retail 20/20 Forum Tokyo, the company reflects on progress made and insights gained following the launch edition in 2018.

In February 2018 in what was a first for WWD, Tokyo’s fashion and lifestyle real-estate developer LUMINE and Japan itself, WWD Retail 20/20 Forum Tokyo launched an extension of similarly focused conferences developed by WWD taking place several times per year in many of the fashion industry’s global centers.

As the third edition of WWD Retail 20/20 Forum Tokyo rapidly approaches, LUMINE has had the opportunity to reflect and take stock, reviewing the impetuous, insights, unique learning and new potential gained from producing and hosting.

While Japan is a well-known focal point for many verticals comprising the fashion industry -manufacturing, design and retail- the market on the whole has been experiencing consistent contraction relative to its foreign contemporaries for an extended period.  While causes and tabled solutions have been many and frequent, there did not exist a forum by which to give voice to the disparate issues facing Japan’s market.  WWD’s successful conferences presented an elegant solution, one in which several stake holders representing a myriad of pressing issues could air their experiences, challenges and ideas alongside international experts adding an element of thought diversity, following that many of the issues concerning Japan have been top of mind to companies throughout the world.   The conference then could at once reposition Japan’s fashion industry within a greater global development but ideally, inspire structural reforms necessary to realize adaptation and innovation insuring a stemming if not reversal of prolonged market contraction. 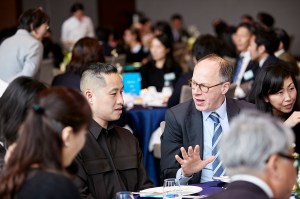 Phillip Lim and James Fallon discussing during the Forum.  Courtesy of Lumine.

From the start of the LUMINE & WWD collaboration partners from Japanese fashion executives increased from 14 companies represented to 29 lending clear proof that the conference’s central advantage is valid.  By sharing crises and perspectives unique inspirations have arisen alongside the discovery that many of the challenges within in Japan are also present in global markets.  Guest speakers chosen by WWD representing expert experience on a conference wide theme -edition one was “New Store Experience” focusing on e-commerce and digital marketing, while the second edition gave spotlight to Japanese thought, seeking to project outward perspectives and innovation internationally, in doing so invited Akira Minagawa of Minä Perhonen- in a way flattened out understanding of many issues within in the industry while raising an awareness of Japan’s strengths and weaknesses and the importance of mixing varied perspective together to explore new and ideals towards fashion retail.

Outside of the yearly conferences LUMINE has realized a few key observations as a result of its collaboration.  Awareness and motivation to tackle structural difficulty in an industry that is experiencing systemic change is more widely accepted, lending a necessity is the mother of invention type attitude to Japanese operational doctrine.  Additionally through WWD’s global brand and international perspective, unique Japanese manufacturing and initiatives are more easily shared with foreign countries, while Japanese retailers can relate current environmental difficulty and success through increased international interaction and dialogue.   Amongst the ten yearly editions of the WWD summit the Japanese edition has carved out an important source of perspective previously under represented on the global spectrum.  The conference has increased international understanding of Japan’s power and philosophy towards retail, while specific to LUMINE, the company’s unique twin competencies as real-estate developer/operator and retailer with stand-alone stores in Jakarta and Singapore lend the conference real value and identity to the attendee and its hosts. 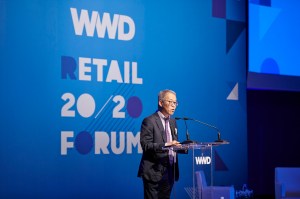 Of the third edition and the future LUMINE looks to discover clues to the paradigmatic shift occurring in retail gained from an aggregation of all three conferences’ insights, taking these suggestions as basis to forge further collaborations and specific actions with companies who believe in making concrete change.  Through dialogue and exchange LUMINE will continue to burnish its contribution to Japanese and global fashion industries. 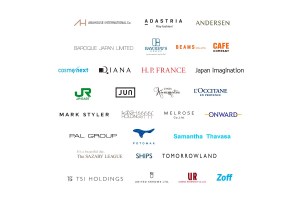