Faster than you can say “Jingle Bells,” my local CVS reset its seasonal aisle immediately after Halloween for the holiday shopping season, which many analysts say really begins on Nov. 1.

At Rite Aid and Walgreens, holiday promotions were in full swing, with the latter offering “50 percent off beauty gift sets and holiday must-haves.” At Starbucks, it’s officially the holidays, with the coffee purveyor offering its famed “Christmas Blend” while doling out lattes in the brand’s notable, holiday-themed cups.

Some retailers were a bit behind the holiday curve. At Macy’s flagship Herald Square location in New York, blackened windows asked customers to be patient while the retailer prepped its holiday window display — to be unveiled on Nov. 15.

Black Friday was once the official kickoff of the holiday season. But anxious retailers and bargain-hungry consumers — along with the allure of online holiday promotions that often begin in September — have changed the cadence of the entire season. And with gift card redemptions and online returns, the season doesn’t really end until after mid-January.

This year, retail analysts are bullish about the outlook for holiday sales. Physical stores are expected to be packed with shoppers while online is seen growing at a double-digit pace. And, of course, Amazon is expected to garner half of all online sales again this year.

Behind this forecast is a resilient consumer whose confidence is buoyed by higher wages and a solid employment outlook. Tempering this confidence, at least as economists see it, is inflationary price trends as well as health care, transportation and housing costs that are gobbling up more wallet share than in the past. Still, overall, the picture is rosy.

So why am I not feeling as confident? Eroding my joy are ongoing retail bankruptcies, store closures and empty “B” malls. Debt-laden retailers are also on my mind. Toys ‘R’ Us’ $5 billion debt load coupled with operating inefficiencies are a stark cautionary tale of how things can go wrong. For now, though, the retail industry looks like it will get a chance to repeat last year’s success.

According to eMarketer, which measures the holiday selling period from Nov. 1 through the end of the year, total sales this season will reach a historic milestone. Sales are forecast to rise 5.8 percent to more than $1 trillion, which the firm said last week will be the strongest growth since 2011. Fueling this estimate is an expected 4.4 percent gain in sales at physical stores, climbing to more than $878 billion — and representing 87.7 percent of total holiday sales. Online sales are seen gaining 16.6 percent to $124 billion (representing 12.3 percent of all sales).

Johnson said the expected increase is due to “rising incomes, always the key driver of consumer spending,” while adding that the retail sector “gained speed as the year unfolded, now doubling its 2.5 percent growth pace from this past winter.”

Still, Johnson’s estimate is below last year’s 5.3 percent holiday sales gain — which retail analysts had said was the result of higher household income coupled with pent-up spending. Johnson said this year’s expected “robust growth is based on sound fundamentals like full-time job growth and rising real incomes,” which bodes well for the longer term. He added the sales momentum “is far more likely to be sustainable well into the new year and beyond.”

But despite the best efforts of many companies, not all are equally adept at capturing sales and wooing shoppers. It’s a tough, blood-thirsty market, and just because consumers feel confident and are poised to spend doesn’t mean every retail brand will be a winner this season.

Andrew Lipsman, principal analyst at eMarketer, said in the firm’s holiday report that while e-commerce will continue to see strong double-digit gains, “brick-and-mortar retail should be a particularly bright spot this holiday season.”

However, Lipsman quickly added that not every “brick-and-mortar retailer is thriving, and several have shut their doors this year, but others are really capitalizing on the strong consumer economy. Retailers are luring in shoppers with remodeled stores, streamlined checkout and options to buy online, pick up in-store.”

In Adobe’s annual holiday forecast, John Copeland, head of marketing and customer insights, said as “online shopping surges with another record-breaking holiday season, the retailers with compelling web sites coupled with physical store locations will have the advantage.” Copeland said many consumers “want to interact with retailers’ products and the brand in-store, and the ability to pick up online orders in-store within a matter of hours can’t be underestimated.”

For my part, the notable keyword in Copeland’s statement is “compelling.” The online shopping experience must be executed flawlessly. That means having products shoppers want and at the right price point. The product has to be in stock and there have to be multiple payment options. And lastly, the product has to be delivered in a preferred way: in-store, or at home, and in a timely manner. All of which is one tall order. 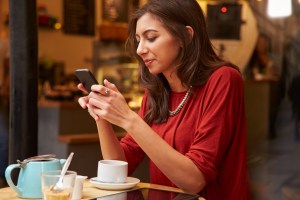 There’s another wrinkle to the challenges of online sales growth and the convergence between physical stores and online shopping, which is the prominence of mobile devices. In NPD’s most recent “Connected Intelligence Application & Convergence” report, researchers at the firm said the “role of the consumer device is evolving, as content that was once the domain of the computer continues to migrate to smartphones.”

“While activities such as maps/navigation, e-mail, and social media have been steadily transitioning to smartphones, shopping has seen the greatest two-year increase in smartphone usage,” NPD said. “Over the past two years shopping gained six percentage points, with 45 percent of smartphone users now reporting they shop online via their device.”

What makes this so critical is that executing a successful mobile shopping strategy must be easy for the consumer, and free of friction around product selection, sizing, in-stock positions and checkout. Product display pages have to be easy to read and use on a smartphone. And customer profile data and payment information has to be secure and accurate. One hiccup in the mobile shopping experience, and that customer will go elsewhere.

Another challenge is the physical transformation of retail. In New York City, Los Angeles, Chicago and Dallas, prime retail space that was vacant is seeing new life. But it’s not with fashion brands. Instead, experiential retail brands are moving in — such as a fitness gym, beauty/spa specialist or an eatery. And while the pace of store closures has decelerated, there are still brands out there at risk.

Lauren Leach, a member in Conway MacKenzie’s Real Estate industry vertical, said in a recent report that in 2017 there were a record 8,000 store closures — well above the annual average of about 2,000 (companies typically open and close stores throughout the year, based on performance). She cited the impact of Amazon and the changes in the “delivery infrastructure” as a cause for concern for why store closures will continue. So far this year, there have been over 3,200 closures, according to WWD reports.

“However, not all retailers are going out of business due to the shift toward online sales; some have simply fallen victim to bad business practices and acquired too much debt,” Leach said in her report, adding that some notable failures this year include the bankruptcies of Sears Holdings Inc., Mattress Firm and Nine West Holdings as well as The Bon-Ton Stores, Toys ‘R’ Us and Tops Markets.

For Leach, the companies that are in a vulnerable position heading into 2019 include Sun Pacific Holding Corp., Vince Holding Corp., J. Crew, Neiman Marcus, J.C. Penney, GNC and 99 Cents Only stores, among others. In particular, Leach noted the debt loads for J. Crew ($1.7 billion). Neiman Marcus ($4.8 billion) and J.C. Penney ($4.2 billion) as troublesome. That said, these are legacy retail brands that have staying power in the market. They just need a solid plan to unsaddle some of that debt. I hope.

Meanwhile, it’s apparent that the holidays are already here, again. Better hunt for deals. Oh, and look, Neiman Marcus (at press time) is having a flash sale. Forty percent off with free shipping and free returns, online only — for the next 48 hours. Time to shop.