WWD highlights the 10 must-read stories of the week. 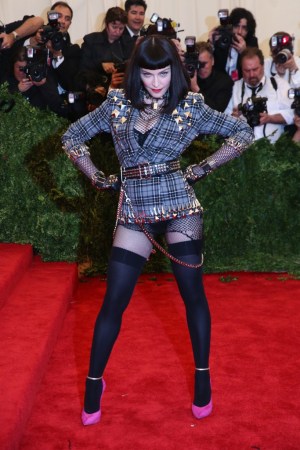 Anarchy at The Met: ‘Punk’ Makes Its Debut

It is an 80-block walk, give or take, from 315 Bowery, that long-ago home of CBGB and New York punk’s spiritual stomping grounds, to the steps of the Metropolitan Museum of Art. But attendees at the Costume Institute gala at the Met, which this year celebrated “Punk: Chaos to Couture,” did their best to bring the spirit of ’77 with them to the Upper East Side, where some wore it on their sleeves and others in mind-set.

Among those on hand were honorary chair Beyoncé, as well as cochairs Rooney Mara, Riccardo Tisci, Lauren Santo Domingo of Moda Operandi and Anna Wintour. Asked if he expected any punk behavior from the guests, Tisci played the anxious host early in the evening.

“I hope not,” the Givenchy designer said before joining Wintour and Mara atop the museum’s grand staircase to greet guests at the end of a line of models dressed in their safety-pinned finest. One popular model at the top of the stairs wore a bleached Mohawk and red leather jacket scrawled with “The Government is Lying.”

NEXT: Reform Calls Mount After Another Bangladesh Tragedy >>

That is the number of disasters that have hit Bangladesh’s textile and apparel industry in the last six months, and the total of the number of people who have died so far. The latest disaster, late Wednesday, was another factory fire in the Mirpur industrial district of Dhaka that killed eight people, while the number of deaths in the Savar building collapse on April 24 rose to 950.

The fire late Wednesday night has added “a dramatic sense of urgency” to IndustriALL Global Union’s negotiations with international apparel brands and retailers that source from Bangladesh to broker a binding deal on fire and building safety by the May 15 deadline, the umbrella grouping that represents apparel union affiliates worldwide said Thursday.

NEXT: Bangladesh Officials Coming To D.C. >>

In the wake of the collapse of the factory building in Savar, Bangladesh, that has now claimed more than 800 lives, a delegation of officials will visit Washington next week for two days to lobby the U.S. government to maintain preferential trade status for the Asian country’s textiles and apparel.

“It is crucial for us to use any chance of communication before the Generalized System of Preferences review, which is expected by the end of the month,” a Bangladesh government official said.

At the same time, a United Nations independent expert group Wednesday urged international apparel brands not to pull out of the country but to work together with the government, international organizations and civil society to address working conditions in Bangladesh’s garment sector.

Even though brands and retailers have spent the past few years acquiring robust followings on the leading social media platforms — Facebook, Twitter, Pinterest, Instagram, YouTube and Tumblr — coupled with editorial content, blogs and e-commerce on their respective digital flagships, there is still no universal way to measure return on investment in the digital space.

But there is a way to obtain data on which platforms have begun to work in terms of fueling sales and driving traffic to e-commerce sites — and it’s all about video.

Editor’s Note: Think Tank is a periodic column written by industry leaders and other critical thinkers. Today’s column is written by Congressman George Miller of California, an apparel-producing state. He is the senior Democratic member of the House Committee on Education and the Workforce.

The death toll in Bangladesh’s garment industry is staggering, with 1,000 dead over the past several years. In the latest tragedy, an eight-story building that housed five garment factories collapsed, killing more than 500 so far, injuring more than 1,000 and leaving an unknown number of people trapped in the rubble of the Rana Plaza. And just five months earlier, a devastating fire at the Tazreen Fashions factory killed at least 112 garment workers.

These two tragedies are not isolated. Since Tazreen, at least 40 incidents causing death and injuries as the result of fires and explosions at garment factories have occurred. Undoubtedly more will follow unless the major fashion brands change their business models.

NEXT: Timing May Be Right for Neiman Marcus IPO >>

Timing May Be Right for Neiman Marcus IPO

Neiman Marcus Inc. appears headed for an initial public offering, with owners TPG Capital, formerly called Texas Pacific Group, and Warburg Pincus itchier than ever to cash in on their investment.

The question is when, according to retail and financial sources, who this week were eagerly speculating about NM’s future amid reports that Credit Suisse is exploring different financial scenarios.

Representatives at TPG, Warburg Pincus and Credit Suisse declined comment Monday. The bank already has ties to the Dallas-based luxury retailer, however. Susan Schnabel, who is a managing director at Credit Suisse and cohead of the affiliated DLJ Merchant Banking Partners, sits on Neiman’s board, although she has no involvement with Credit Suisse’s investment banking business.

SINGAPORE — To some, this country is the quintessential millionaire’s playground: a city-state of vertigo-inducing skyscrapers, fast cars and packed nightclubs.

The tiny island off mainland Asia is all that, but every now and then, little emblems of its colonial past — English-speaking, multiethnic neighborhoods and roads named after long-forgotten British administrators — crop up, serving as reminders that Singapore was once an eastern jewel in the British crown.

MILAN — Ottavio Missoni, who founded the iconic Missoni fashion brand with his wife Rosita, died Thursday at his home in Sumirago, Italy. He was 92.

On May 1, Missoni, known by his nickname Tai, was hospitalized for a cardiac problem but was released later that evening.

A wake will be held for Tai Missoni on Sunday in the Missoni company courtyard in Sumirago, between 10 a.m. and 6 p.m. The funeral will be held on Monday at 2:30 p.m. in the Basilica di Santa Maria Assunta, Gallarate. The family has asked that, in lieu of flowers, donations be made to the Camphill Special School in Glenmoore, Pa.

Rich jewel and earth tones, many detailed with leather, are giving fall’s coats a special charm.

Unilever’s heritage stems from soap, but these days, it’s the company’s beauty business that is really bubbling up. After a decade of fits and starts, the Anglo-Dutch giant has transformed its personal-care business into a mass-market leader. Globally, Unilever posted double-digit gains in personal care in 2012, which accounts for 35 percent, or about 18.1 billion euros (about $23.5 billion at current exchange), in overall sales.

The numbers in North America have been equally as impressive, driven by the dynamic vision of a powerful new management team: Kees Kruythoff, a 20-year Unilever veteran who was appointed president of North America in September of 2011, and Gina Boswell, the executive vice president of personal care, North America, who was named to her current role in July of 2011, shortly after Unilever completed the acquisition of her previous company, Alberto Culver, where she was president of global brands.

“If you had asked me how Unilever was doing a couple of years ago, I would have said they were chock-full of poorly differentiated brands, strolling along the sales cycle without really thinking about the portfolio and what consumers are looking for,” says Victoria Gustafson, principal, strategic insights, of the SymphonyIRI Group. “In the last couple of years, I have seen a huge change, particularly in hair care.”