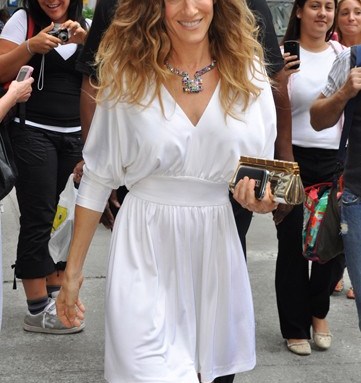 Halston is about to get the Carrie Bradshaw touch. The star has signed on to take an active design role, possibly even that of creative director, for Halston Heritage, the company’s just-launched secondary collection that features updated archival pieces at contemporary price points. The deal is said to also include an equity stake in Halston or some other executive role for the 44-year-old Parker, although that could not be confirmed at press time. Another stylish celebrity taking on a creative role at a storied house: Kate Moss, who will design a signature line of handbags for Longchamp. Other stars are taking a more traditional role, appearing in advertising for a house instead of designing for it. Megan Fox is serving as the face (and body) of Emporio Armani, while soccer champ Cristiano Ronaldo appears in the men’s version of the campaign. Robin Wright has been tapped for Gerard Darel’s ads, while Halle Berry is coming out with a new fragrance in her Coty portfolio, called Pure Orchid.

On Monday night, about 75 of retailing and fashion’s leading figures kicked off an unprecedented, yearlong initiative with Mayor Bloomberg’s office, called Fashion NYC 2020, to brainstorm about the future and ramp up the city’s presence as a global force in fashion amid mounting international competition and outsourcing. Among those attending were retailers Stephen I. Sadove, Terry Lundgren, Burt Tansky and Jim Gold; designers Diane von Furstenberg and Phillip Crangi; and media figures Anna Wintour and Cathy Black. Slated topics included Fashion’s Night Out (which is returning in September), bolstering business in the boroughs and the fashion season cycle.

Get ready for Michael Kors and Heidi Klum, video game heroes. They don’t carry Uzis, kill monsters or zoom along city streets in souped-up hot rods. Their game focuses on something that can be more dangerous and filled with intrigue: fashion. Kors and Klum are figures at the cutting-edge of an emerging effort to tap into what is seen as a major new frontier for the $20 billion, testosterone-driven U.S. video game industry: 18- to 25-year-old women. Games based on Lifetime’s “Project Runway,” featuring Kors, Klum and Tim Gunn, and on IMG-produced fashion week events will go stiletto-to-stiletto this year.  The products are being introduced as the male-dominated industry — double the size of the U.S. music business — has awakened to the power of the female consumer, including the possibility for brand marketing if women can be convinced that video games are credit card-worthy.

This week brought a wealth of pre-fall collections from major designers. At Balenciaga, Nicolas Ghesquière was in a sporty spirit, fusing technical fabric and painterly prints in a range of daring silhouettes. Phoebe Philo showed her playful side in Celine’s new collection, incorporating a panda motif into a feathered dress. Derek Lam focused on what he termed “wardrobe essentials” like no-fuss dresses, pants and outerwear. Inspiration came from matadors at Matthew Williamson, while Alber Elbaz focused on a jungle theme at Lanvin. Presenting at Pitti W, Giles Deacon went for a characteristically extreme statement with outlandish headgear resembling paper clips, plates and wrenches. See all collections from the ongoing season here>>

In a bold step, Japanese cosmetics giant Shiseido Co. Ltd. has launched an estimated $1.7 billion tender offer to acquire Bare Escentuals Inc., one of the hottest brands of recent years. Under the terms of the tender offer, which is scheduled to start in 10 days, Shiseido plans to buy shares for $18.20 each, a 40.8 percent premium over Bare Escentuals’ average stock price during the last three months, and a 39.9 percent premium over the closing price Wednesday. Once the majority of stock is tendered, Shiseido said it would buy the remaining shares for the same price, $18.20, in a second-step merger. The offer was made through Shiseido’s U.S. affiliate.

A host of up-and-coming designers will be showing in the city next week. 30-year-old Kilian Kerner has not one, but two shows in Berlin; Chloé, Dior and Christian Lacroix veteran Sam Frenzel is striking out on his own with a namesake line. Christina Arend is taking a holistic approach to her Arrondissement Aq1 collection, with apparel and accessories sharing the bill, while Dimitri Panagiotopoulos is aiming for a Mediterranean influence. There are also a few newcomers to the retail landscape, including Berlin hipster mainstay AllSaints and the world’s first-ever American Apparel Kids. When they’re not shopping, visitors to the city can rest at one of the many boutique hotels or take in the rare antiquities at the Neues Museum. For a guide to Berlin’s multiple fashion weeks, click here.

Once upon a time, preppy classics like blazers, nauticals and crisp cottons were in a deep sleep. But with a dash of naughty secretary and an enchanted garden to boot, the fashion fairy tale comes to life. Watch the video here. Skinny looks remain popular with trendsetters around the world, as evidenced by our street-style roundup. To see more from WWD FAST, click here.

Challenge for 2010: Consumers Get Choosier

Consumers are now accustomed to doing without things they once considered essential: attending a concert or sports event, dining out regularly, buying a new car when an old one was still running, and buying premium liquor or a status handbag. However, there are still some items people are willing to shell out for, such as the Amazon Kindle and other tech toys.

Workwear and Americana looks will be popular in the upcoming fall collections, with salient materials including corduroy, boiled wool and distressed denim. The shows will also see the unveiling of two new additions to the lineup: Black Fleece by Thom Browne and Galliano, a diffusion line from John Galliano. Another exciting development: Three designers will be streaming their runway shows online: Emporio Armani, Z Zegna and Burberry (the latter will stream live on GQ’s site).

Back in Time: Sarah Caldwell at the Met

In January 1976, Sarah Caldwell was the first woman to conduct the New York Metropolitan Opera and when she gave the first downbeat of Verdi’s “La Traviata,” WWD was there. Her debut got a mixed review: WWD’s critic called it “routine, meticulous and slow, but consistent” and “an intelligent reading, helped by the horribly old-fashioned and tacky production.” But performers William Walker and Beverly Sills were impressive. Walker was a last-minute substitution and played a “superb” elder Germont, while Sills, a “marvel of an acting singer,” nailed Violetta. In the end, WWD’s critic admitted that Caldwell came off well, but wondered about future performances without Sills’ or Walker’s contributions. Today, we know Caldwell, who went on to a long career in opera and received the National Medal of Arts in 1996, turned out just fine.
Newsletters