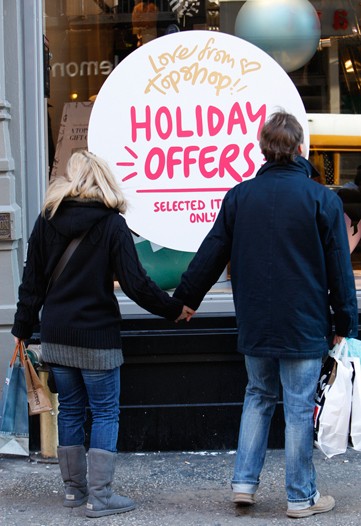 Retailers who kept a lid on inventories to try to squeeze out profits are looking to holiday’s second season — the week between Christmas and New Year’s. Stores are expected to extend their shopping hours and step up promotions over the next few days in order to recoup some of the shopper traffic lost this past weekend in the Northeast’s first major winter storm, which caused an estimated $2 billion in losses. Yet there was some good news for the industry this week: Retail stocks managed their fourth advance in as many trading sessions Wednesday, with the S&P Retail Index gaining 2.18 points.

This city has doubled down on luxury with the opening of the $8.5 billion City Center megadevelopment, but it could be a long time before there is any payoff. It’s an investment — some might say a gamble — for the future as the Vegas market struggles with an almost two-year decline. The 18 million-square-foot complex includes a lavish 500,000-square-foot luxury shopping mall called the Crystals, where Louis Vuitton, Versace, Dior, Gucci, Prada, Hermès, Fendi, Tiffany & Co., Van Cleef & Arpels, Cartier, Bulgari, Tom Ford and Bottega Veneta have all leased space. However, factors like lower gaming revenue on the Strip, high vacancy rates at hotels, diminished tourism, a double-digit unemployment rate and home foreclosures have all negatively impacted the area and may make it hard for the shopping center to be a success. Meanwhile, several luxury brands are opening up overseas: Dior and Chloé launched boutiques in Beirut, and Carolina Herrera unveiled a shop in Tsum, a department store in Moscow.

From the hallowed halls of Cartier to the red carpet of the CFDA awards, WWDVIDEO looks back at the highlights of 2009. In this whirlwind presentation, Jessica Biel and Justin Timberlake grin for the photographers, Doutzen Kroes takes a spin in her Zac Posen gown and Kate Moss smolders from her Topshop perch. WWDVIDEO’s 2009 footage also gives a peek behind the scenes of some of WWD’s signature fashion shoots with songstresses and style stars. Click here to watch the video retrospective>>

Phi to Shutter in January

The critically acclaimed sportswear label, founded by Susan Dell in 2003, is closing, another victim of the recession. Designer Andreas Melbostad’s collections were widely praised by fashion insiders, but targeted a select group of fashion consumers — so niche that its prospects became too restricted for the label to continue to be viable in the current financial climate. “Unfortunately the current realities have shrunk that [niche] market.,” said Phi ceo Julia Hansen. “This decision wasn’t based on how is the collection doing right now, but it was based on the overarching economic climate and the downward pressure on luxury goods over the next 12 to 24 months.” (Click here to see Phi’s final collection from spring 2010.) In another sign of the times, Ben Sherman Group Ltd. plans to close its women’s wear division and focus on its core men’s wear business. Miles Gray, the outgoing group ceo, said the company, a division of Oxford Industries, planned to focus on its strongest performing division.

Pop goes the shop. The hottest trend in retailing this year isn’t Zhu Zhu pets or over-the-knee boots — it’s pop-up stores. Global luxury brands, mass merchants and indie designers have opened an avalanche of them in the last 12 months to introduce new products or collections, generate buzz or motivate the ever-elusive shopper to buy. They also can be a way for a retailer to test a neighborhood before plunging head-on into an expensive real estate commitment. Once an underground phenomenon, pop-ups sprouted in fringe neighborhoods and seemed to be an act of defiance on the part of those operating them. Rei Kawakubo played the role of saboteur when she unveiled her first Comme des Garçons guerrilla store in 2004 in a blighted section of the former East Berlin. This year, with everyone from Gucci to Target getting in on the craze, the pop-up trend has become mainstream. The next craze in retail may be online pop-up sales or “swing shops” like the one Scoop is opening in the Meatpacking District, where merchandise rotates every 6 months.

Dolce & Gabbana and Gabriella Forte are parting ways, effective Jan. 1. Forte, who joined the fashion powerhouse in 2002 as president and licensing director of Dolce & Gabbana USA, was most recently executive adviser to the board and to Domenico Dolce and Stefano Gabbana. During her tenure, she served in a number of roles, including sales, marketing and licenses. At the moment, there is no successor in line to follow the high-powered fashion veteran, who has also held key posts at Giorgio Armani and Calvin Klein.

The “Desperate Housewives” star and L’Oréal Paris front woman has delved deeper into beauty with a signature women’s scent, called Eva by Eva Longoria. The eau de parfum, which was developed by Falic Fashion Group, is due to launch in the U.S. in spring. Another celebrity fragrance coming out this spring will be from professional race car driver Danica Patrick. The NASCAR star has signed a worldwide licensing agreement with Boston-based fragrance marketer SA Fragrances that calls for the mid-March launch of a scent called Danica Patrick for Her. Industry sources estimate the scent could generate first-year retail sales volume of $7.5 million to $10 million. The perfume will be advertised with a national campaign and promotions at races.

Uniqlo Ramps Up Growth in Europe

The Japanese fast-fashion brand will launch its first location in Moscow in April. It already operates a 23,000-square-foot flagship in central Paris, which opened in October. Uniqlo also has its sights set on other major European cities, such as Madrid, Barcelona, Milan and a city in Germany. It’s possible the retailer will expand in London, where it has 14 boutiques, said marketing director Charlotte Bouvier said. Such moves are part of Uniqlo’s goal of being a global force. It intends to open 100 to 200 stores a year outside Japan. Another bright spot for Uniqlo is its ongoing collaboration with Jil Sander, who unveiled her spring/summer +J line for them this week.

Track & Field, a high-end fitness and lifestyle apparel brand with 36 stores in Brazil, wants to tap into the $30 billion U.S. fitness industry. The company, which uses innovative fabrics such as material that stays dry and fabric that stretches comfortably, will launch an 850-square-foot store next month at 977 Madison Avenue and 77th Street in Manhattan. Another entrant into the activewear market is Equinox Fitness Club. The gym chain is launching its first private label apparel offering, called Orange, as part of a bid to become a lifestyle brand. Starting December 14, Orange will be sold in Equinox shops, which already carry a mix of fashionable performance brands from John Varvatos to Alexander McQueen for Puma and exclusive collections with Nike.

Back in Time: Baryshnikov’s Nutcracker

“Balanchine’s is better,” began WWD’s review of the American Ballet Theater’s “Nutcracker” in 1976. The opening performance on Dec. 21 was the debut of famed dancer Mikhail Baryshnikov as a choreographer. George Balanchine’s production had been the most popular version of the ballet in America since 1954, and Baryshnikov’s take was indeed quite different. Where Balanchine had used children in many roles — eliminating the romantic inferences in the story — Baryshnikov’s dancers were adults. His darker take on the production is now one of the most popular versions of the ballet.
Newsletters