Rita Wang is Xiaohongshu’s number-one fashion influencer you have never heard of, and brands should embrace it as they did with Weibo and WeChat.

Xiaohongshu may be the one of the most disruptive platforms at the moment in China. The social commerce platform provides a marketplace for fashion, beauty and travel lovers to share and discover new products and services.

Riding on this trend, a new breed of native fashion influencers is on the rise. But foreign brands seem to have little idea how to deal with them, as most of the companies are just getting to know about what myriad things WeChat and its mini-programs can do.

“Brands’ local communication teams have been pushing very hard to get Xiaohongshu influencers to come to their events, but I don’t think their head offices know about their existence yet,” said a public relations manager whose company’s clients include Prada, Fendi, Loewe, Chloé, Valentino and Chanel. She asked to speak on the condition of anonymity due to company policy.

Another top luxury brand’s China public relations manager said the company has actively involved top Xiaohongshu influencers to attend local events, but not yet invited any to their Paris fashion show as the communication with the head office explaining who they are will take a very long time and their strength is at sales conversation. “They can move a lipstick or a CC cream, not a bag or a dress,” he added.

Elijah Whaley, chief sales and marketing officer of Parklu, a China influencer marketing platform, believes Xiaohongshu has great potential, though. “It has always been a great place for fashion brands. But it’s not hot with luxury brands yet. Luxury brands’ primary focus is still WeChat and Weibo,” he added. 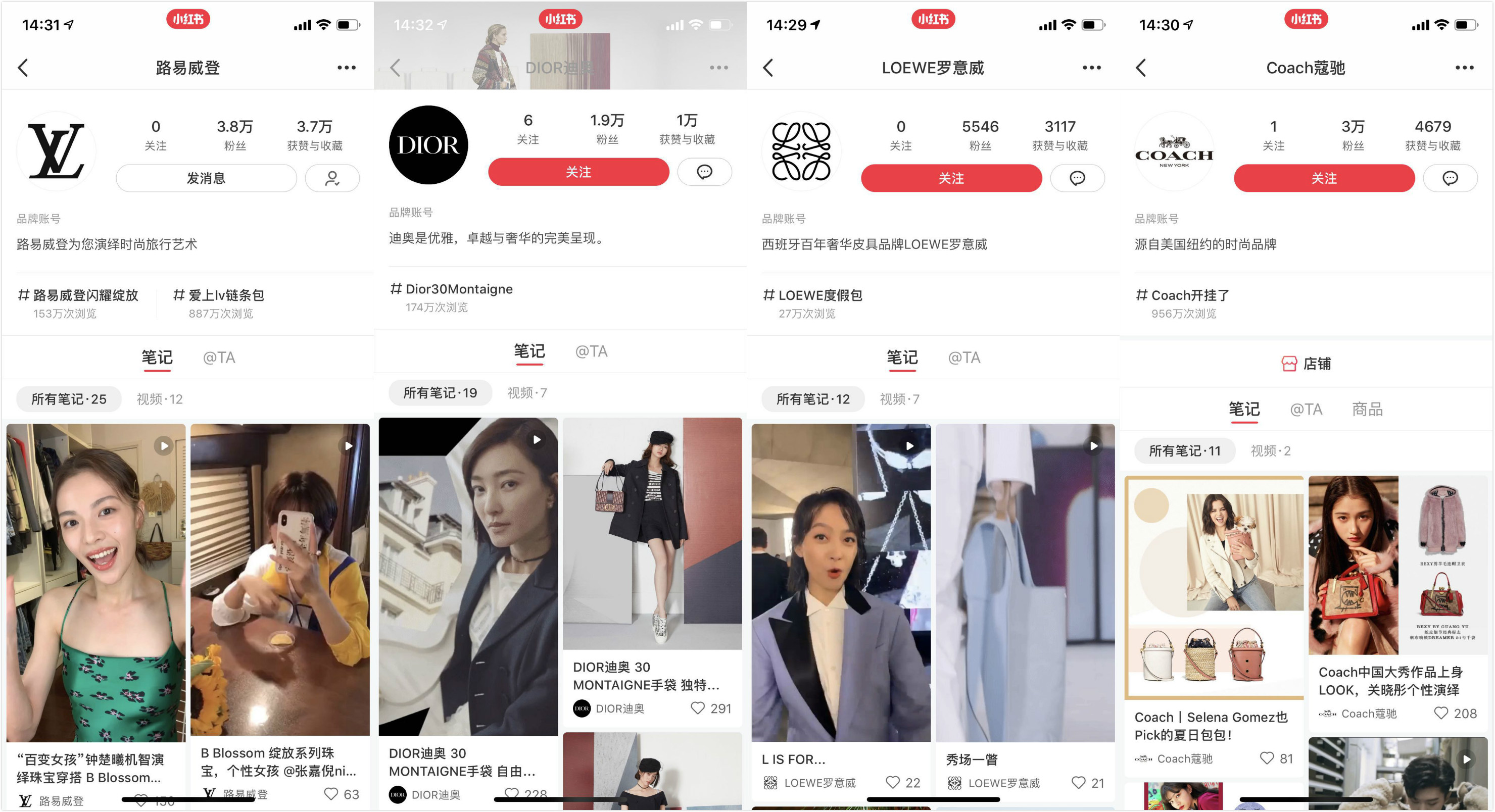 Brands were skeptical when WeChat and Weibo first came around, too, but both have become the key platforms to engage with the Chinese audience. And Thomas Ye, or Gogoboi on social media, who started with no more than 6,000 followers on Weibo, has been China’s top fashion influencer, until now.

China’s social media landscape has not seen anything as disruptive as Xiaohongshu. The country’s largest independent digital agency Hylink’s internal memo, seen by WWD, said “as a platform, Xiaohongshu is distinctive from other Chinese apps because its main purpose is social shopping,” and its “backbone is a UGC and AI algorithm which determines what users see based on their individual interests. Thereafter, whenever users open Xiaohongshu, they see a series of photos and videos based on their preferences. The products used in each photo and video are linked so consumers can buy what they see.”

The top posts are usually from influencers who have attracted a following on the platform by regularly posting widely shared content. Rita Wang is the number-one fashion influencer you have never heard of on Xiaohongshu, with 3.5 million followers and 2 million likes. In comparison, Ye has 48,000 followers and 15,000 likes there.

Wang established her presence on Xiaohongshu in August 2016, when she was studying at Central Saint Martins’ MA Fashion course in London. Her classmates include the LVMH Prize-shortlisted Stefan Cooke and Leo Gong, whose brand 8on8 made its international debut in London last month.

She believes her success on Xiaohongshu comes from forming a genuine connection with her followers. “I post everything about me, about my life to make my followers understand me more, a real me. Even my daily mood,” she said.

Wang also posts on Weibo, Instagram and Bilibili, a Chinese video site, but her content resonates the most with Xiaohongshu’s narrow psychographic and demographic concentration on young, internationally minded, fashion-forward females.

Wang observes that luxury brands’ attitudes are changing toward her and Xiaohongshu. In May, Louis Vuitton became the first luxury brand to debut on the platform, in which she created native content promoting the New Wave bags. A slew of luxury brands have since followed, including Dior, Loewe, Coach, Fendi, Michael Kors, MCM and Saint Laurent. 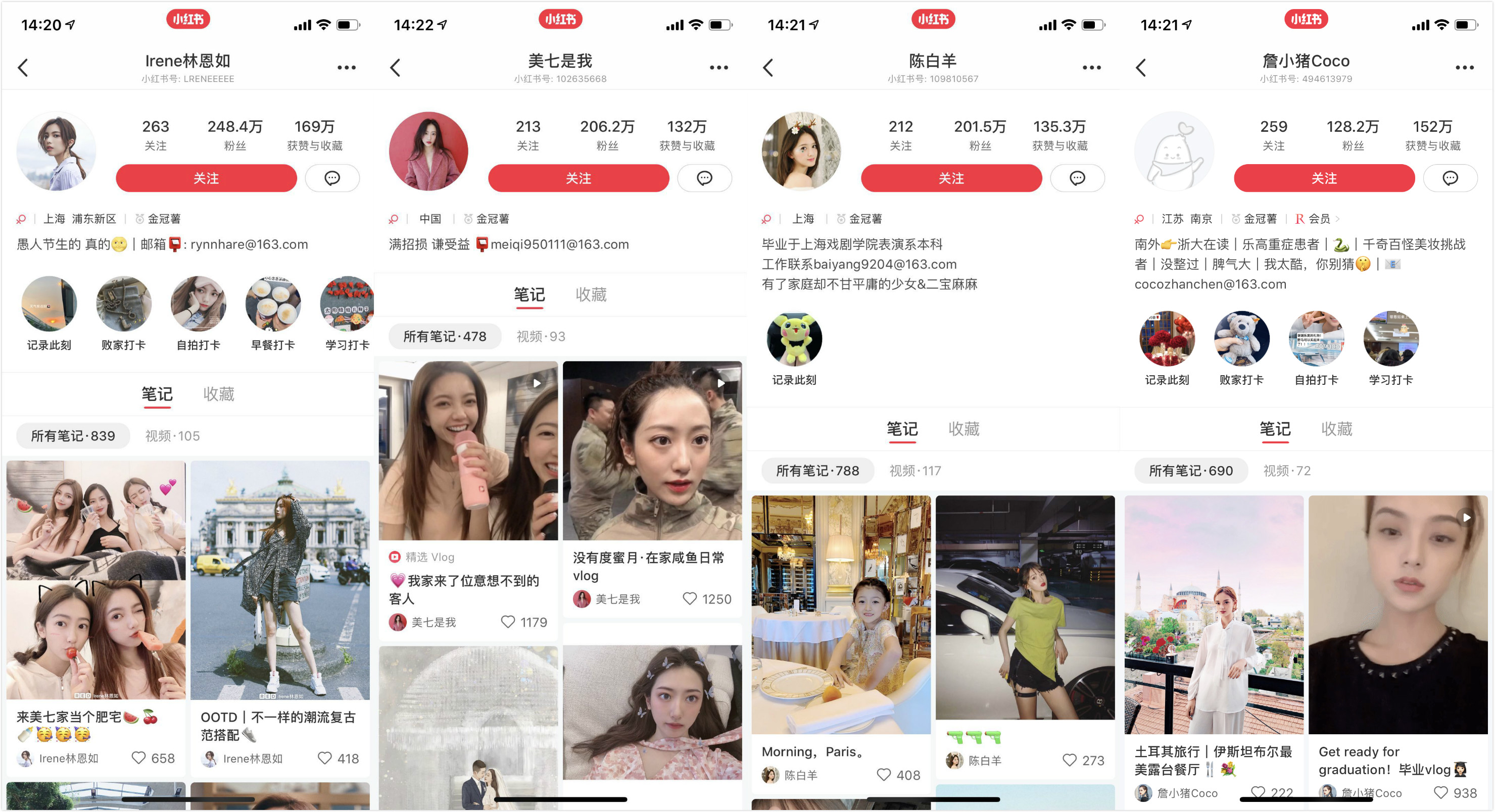 Other major native fashion and beauty influencers on Xiaohongshu include Enru Lin, Coco Zhan, Baiyang Chen and Meiqi, with followings ranging from 1.28 million to 2.48 million. What they have in common is that they all have the girl-next-door vibe that Xiaohongshu’s users can gravitate toward.

Established Chinese fashion influencers are getting a slice of the Xiaohongshu pie as well. Tao Liang, or Mr. Bags, who has 5.3 million followers on Weibo and 311,000 on Xiaohongshu, told WWD earlier that it is one of his fastest-growing platforms. “Every day we have over 1,000 new followers. The content on it is short videos, which are very popular in China right now,” Liang said.

Fil Xiaobai, who has 4.46 million followers on Weibo and 52,000 followers on Xiaohongshu, said usually Xiaohongshu content is sold as a package with Weibo and WeChat, but recently brands like Ports wanted to work with her on exclusive content for Xiaohongshu.

Even as more begin to use the platform, some influencers remain hesitant. Mr. Kira, who has 3.2 million followers on Weibo and 5,410 followers on Xiaohongshu said “it introduced a lot of mechanisms, such as strictly filtering the user’s unauthorized advertising behavior. That is to say, all users trying to publish advertising content must pass the consent of Xiaohongshu and this caused a lot of dissatisfaction among influencers.”

Parklu’s Whaley added that, “The one thing about Xiaohongshu that will likely be difficult for luxury brands to swallow is that, right now, Xiaoshongshu does not want high-quality, highbrow content. It is focused on what they consider ‘authentic’ content, which means smartphone images or roughly edited videos that are non-advertising in nature.”

“We have seen many high-quality KOLs, that luxury brand followers love on WeChat and Weibo, flounder on Xiaohongshu. It actively blocks and deletes content that it doesn’t deem aligned with its platform’s ethos. Luxury brands are really going to have to allow some brand identity flexibility if they want to succeed on Xiaohongshu,” Whaley added.

Hylink’s memo said the biggest challenge for brands to promote themselves on Xiaohongshu will be “maintaining a strong connection with customers offline” and luxury brands especially need to “consider the brand image to connect to the younger generations that are active on Xiaohongshu. Since it runs on electronic word of mouth, the app can be both an exceptional marketing platform but also a customer complaint window.”

Charmaine Lin, general manager of the Shanghai-based Reuter Communications, an integrated marketing communications agency, advises that instead of going big, brands should “seek out those users that made Xiaohongshu what it is today — real users and grass-roots influencers. Both the app’s ‘authorities’ and its users value content that’s more interesting and new compared to everything they’ve seen before by influencers.”

“Xiaohongshu has been able to disrupt social media and social commerce because it shuns the overly commercial and favors the social. Brands should be bold and dare to think outside of the box and outside of the accepted norms of influencer poses — and outside of their comfort zone,” she added.