New year, same goals? Fashion companies across every price point had committed to sustainable targets with a variety of pledges, especially over the past year.

WWD looked at the publicly available targets set in the Global Fashion Agenda’s 2020 Commitment and Ellen MacArthur Foundation’s New Plastics Economy Global Commitment to see what company-specific targets panned out by the end of 2019.

A July 2019 status report from the GFA showed that the 90 signatories had reached 21 percent of their targets (or 45 out of 213 targets), even setting additional targets. Some companies, including Australian ocean activewear brand Salt Gypsy and Tom Cridland, a U.K.-based label best known for its 30-Year Collection of T-shirts and sweatshirts and “Half Century jeans,” were removed from the matrix when they failed to meet the minimum target-setting requirements.

Perhaps it exemplifies the challenges in setting public targets and why some brands opt to stay silent on the matter. But any brand would be foolish to dismiss the green opportunity, which includes entry into new business models like resale.

Cheery Danish contemporary brand Ganni, touted for sustainable designs, touched down in the U.S. just this fall with locations in New York and Los Angeles. And it has resale on the horizon. The company set a goal to implement a branded resale concept for used garments by 2020.

Signatories actually have until the end of June to reach their set targets with some leeway from the GFA. (The Scandi brand reaffirmed to WWD it’s coming later.) According to the GFA, the organization will evaluate and assess the progress made after this deadline. The next status report disclosing the percentage of targets reached will be published by the end of this year.

As Jonas Eder-Hansen, public affairs director of the Global Fashion Agenda, said on the organization’s web site, the status report provides a “rich evidence base for policymakers,” to inspire circular initiatives for the industry.

Similar to the GFA, the Ellen MacArthur Foundation publishes its initial report for the New Plastics Economy Global Commitment in the spring, with a progress report following in October. But there are targets that were technically set to expire by year’s end, including from British brands Burberry and Superdry.

As reported by WWD last March, Burberry was to launch a compostable hanger option, shroud and polybag “by the end of 2019,” even launching a hanger take-back program with its suppliers in the U.K., as part of its commitment to this initiative. 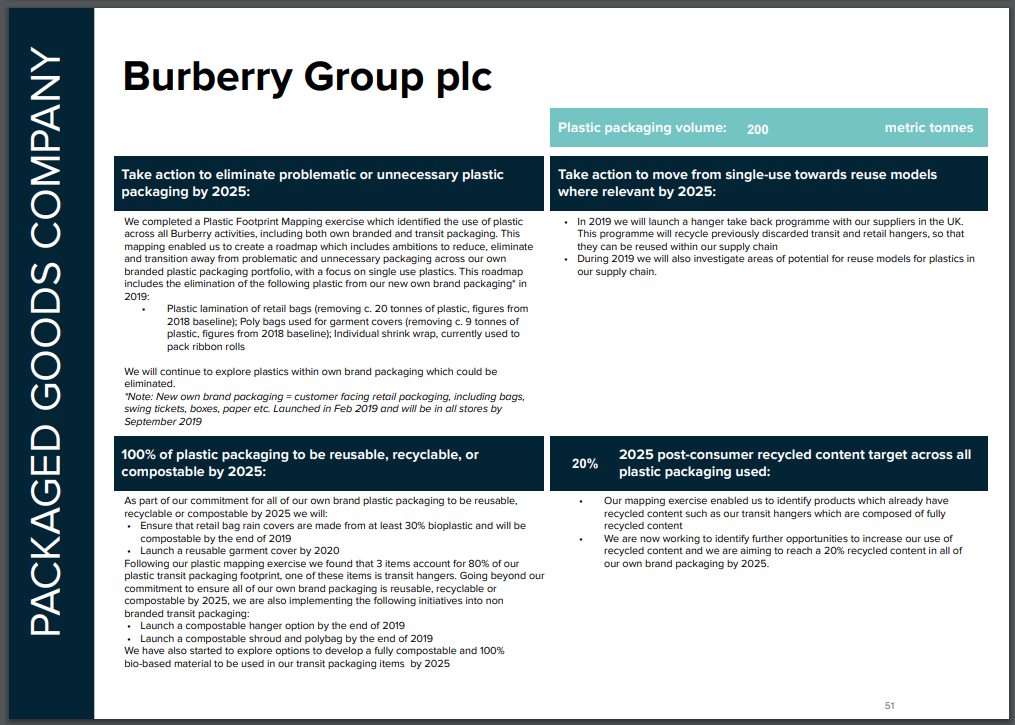 When WWD reached out to Burberry, the luxury brand declined to comment.

Scale is the major stipulation delaying progress. “For packaging to be considered recyclable or compostable under the Global Commitment, it must be proven to work ‘in practice and at scale,” as the latest progress report stated. The organization reiterated that its plastics initiative is “foundation-laying.”

Organizations such as the Ellen MacArthur Foundation agree it’s difficult to track when brands are going above and against their targets but numbers (e.g. volume, units) help. And brands profess uncertainty over the right solutions, preferring lower-risk pilots. As WWD reported in December, Fashion for Good, along with Adidas, C&A, Kering, Otto Group and PVH Corp. are to pilot a “circular polybag” in early 2020.

Another U.K.-headquartered brand Superdry plc planned to remove plastic items from transit packaging and introduce a new version of its plastic e-commerce bag and clear garment bags (with recycled content) before the end of 2019. Superdry could not be reached prior to publication, but the brand was already in the midst of a reset during the year with priority to getting e-commerce and core products realigned.

Carrefour SA, which joined the Global Commitment in October 2018, did have something to celebrate at year’s end having “done away” with plastic straws — with plastic bags to see a phaseout period by 2025. The French grocery chain was the founding retail partner to the Terracycle-owned Loop platform.

No. 3: Sustainability Is a Given, Not a Goal, While Secondhand and Rental Boom

Burberry Wants to Go Plastic-Free by 2025

The Beauty Battleground Is Still Mired in Plastic, Faulty Claims