China to the Rescue

The world's largest luxury market has shown great resilience and delivered promising results for those who got their China strategy right.

LONDON — In a year plagued by COVID-19, China as the world’s largest luxury market has shown great resilience and delivered promising results for those brands that got their China strategy right.

From continuous price hikes, record-breaking tallies, global collection debuts to dazzling physical events, digital viewings and livesteaming selling, luxury brands have made headlines on a daily basis throughout 2020 in the country. This not only offered hope for the suffering industry but also provided a reality check for those who fail to tackle the market.

Back in January, the first sign of the severity of the virus for the fashion industry was the absence of Chinese designers, editors, buyers, celebrities and influencers during the fall 2020 fashion weeks, as travel restrictions were imposed by the U.S., the U.K., Italy and France to prevent the coronavirus from spreading.

While travel bans didn’t do much to stop the global spread of the virus, the health crisis in China was contained by early April, and the country began to show signs that it would become the sole source of growth for many while the rest of the world entered various levels of lockdowns.

The fashion and leather goods division at LVMH posted growth of more than 65 percent in China in the second quarter, while Kering said sales in mainland China rose more than 40 percent in the same period. China also bolstered Compagnie Financière Richemont’s performance, with sales in the region up 78 percent at actual rates in the first half of the year ended Sept. 30.

According to Bain, the luxury goods market in mainland China will likely achieve 48 percent growth in 2020, reaching nearly 346 billion renminbi, or $52.8 billion, doubling the country’s overall share of the global luxury market this year. 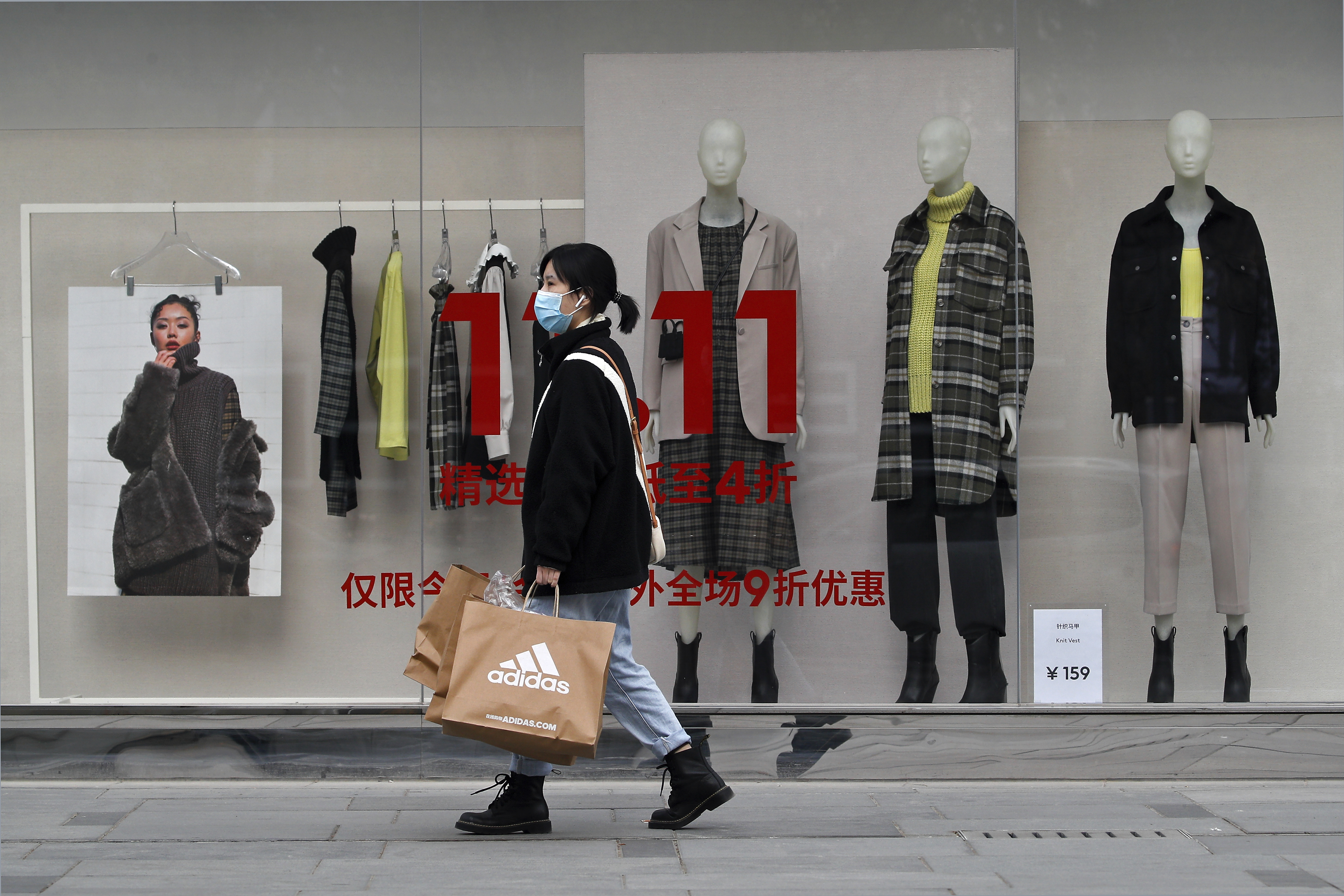 A woman wearing a face mask to protect from the coronavirus carrying her purchases walks by a fashion boutique outlet having the Singles’ Day promotion sales in Beijing.  AP

The Alibaba-owned Intime Retail, one of the nation’s largest high-end retailers with tenants ranging from Cartier to Lane Crawford, saw online business quadruple and revenue bounce back to normal in May thanks to livestreaming, free shipping, as well as a series of campaigns and sales initiatives.

Some 5,000 sales associates from Intime’s store registered as livestreamers to host around 200 sessions daily on Taobao Live during the height of the outbreak to engage with and acquire new users.

Intime introduced free shipping for all in-app purchases and partnered with Cainiao, Alibaba’s logistics network, to help cover deliveries within a 10-kilometer radius of any store location, to further encourage online spending.

Faced with order cancellations, local designers also switched to the direct-to-consumer model. Some see the pandemic as a good opportunity for the industry to fix what hasn’t been working and help companies push forward.

For example, Shanghai Fashion Week partnered with Tmall to move its fall 2020 edition online. Some 150 brands showcased their fall 2020 collections while selling items from the current season via livestreaming to Tmall’s 800 million active users. 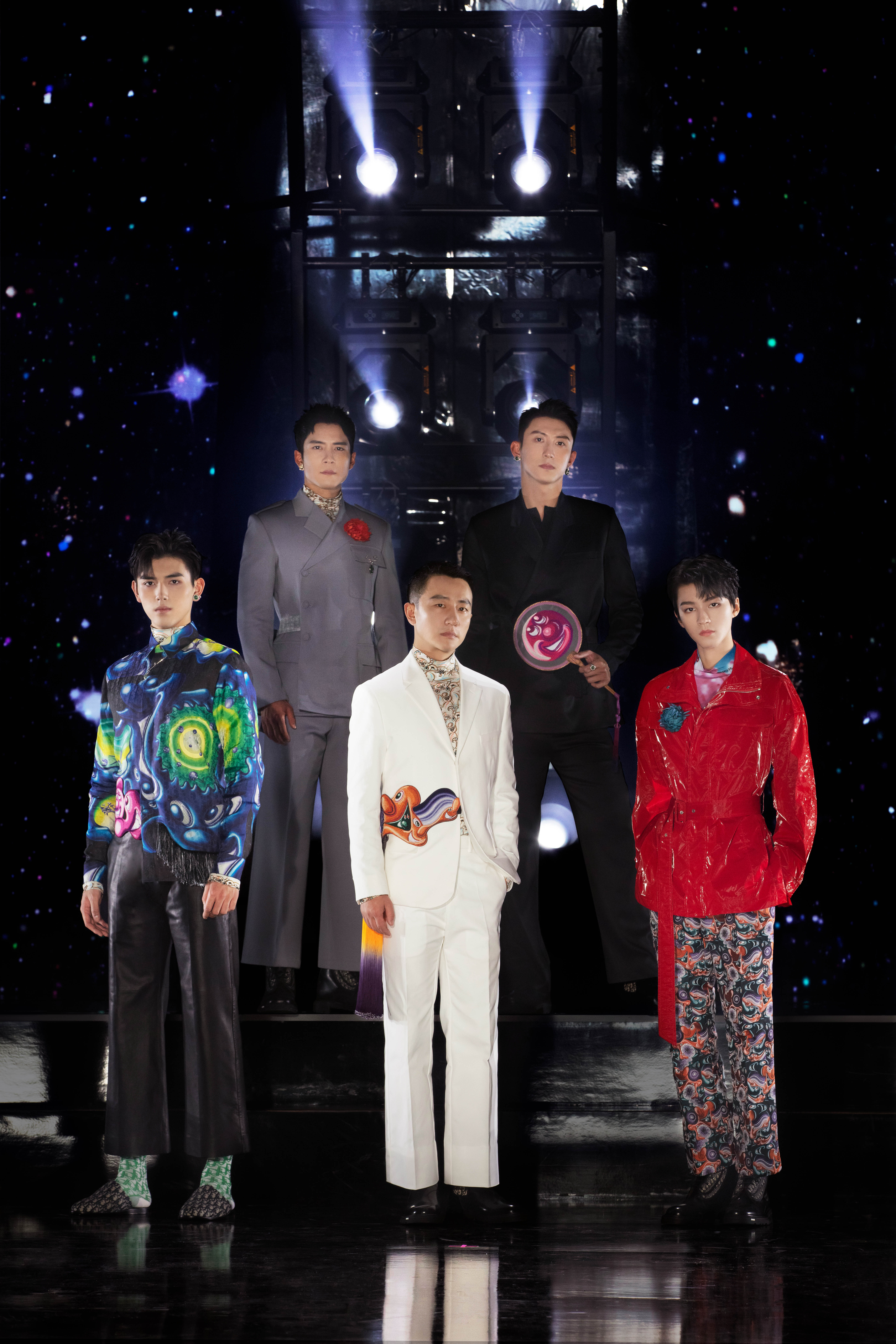 Dior is arguably one of the most aggressive and experimental luxury brands in China when it comes to digital communication.

More than 12 million people watched its livestreaming of the fall 2020 collection in February, and its viewership jumped to 107.7 million with its livesteaming of the Dior Men’s fall 2021 collection designed by Kim Jones in collaboration with Kenny Scharf in December. Inspired by the success in China, Dior streamed the latest show on 11 additional platforms globally, pushing the overall views to 140 million and setting a new record for the brand.

Before moving its men’s wear show to Shanghai in August, Louis Vuitton experimented with livestreaming with the popular social commerce platform Xiaohongshu to promote its summer collection back in April.

The brand also tapped the country’s most talked-about livestreamer, Austin Li, and actress Song Jia for this year’s May 20 Chinese Valentine’s Day promotion. With 40 million fans on Douyin, the Chinese version of TikTok, and 25 million and 15 million followers on Taobao and Weibo, respectively, Li’s endorsement is a highly strategic move, even for top brands like Vuitton.

For the spring 2021 season in September, Prada, Fendi, Valentino, Hugo Boss, Dior and Miu Miu took the livesteaming game to a new level by inviting hundreds of guests to watch the show live in China. They were rewarded with huge social media exposure.

Prada, for example, hosted 180 guests — including brand ambassadors, influencers, high-profile editors and artists — for its viewing reception at Rong Zhai, followed by dinner and cocktails. The livestreaming of Raf Simons’ and Miuccia Prada’s first codesigned collection for the brand on its official Weibo and Douyin accounts saw a record-breaking 48 million participating users exploring the show as well as the viewing event. The Weibo hashtag #PradaSS21 hit 170 million views in one day and now stands at 420 million views. 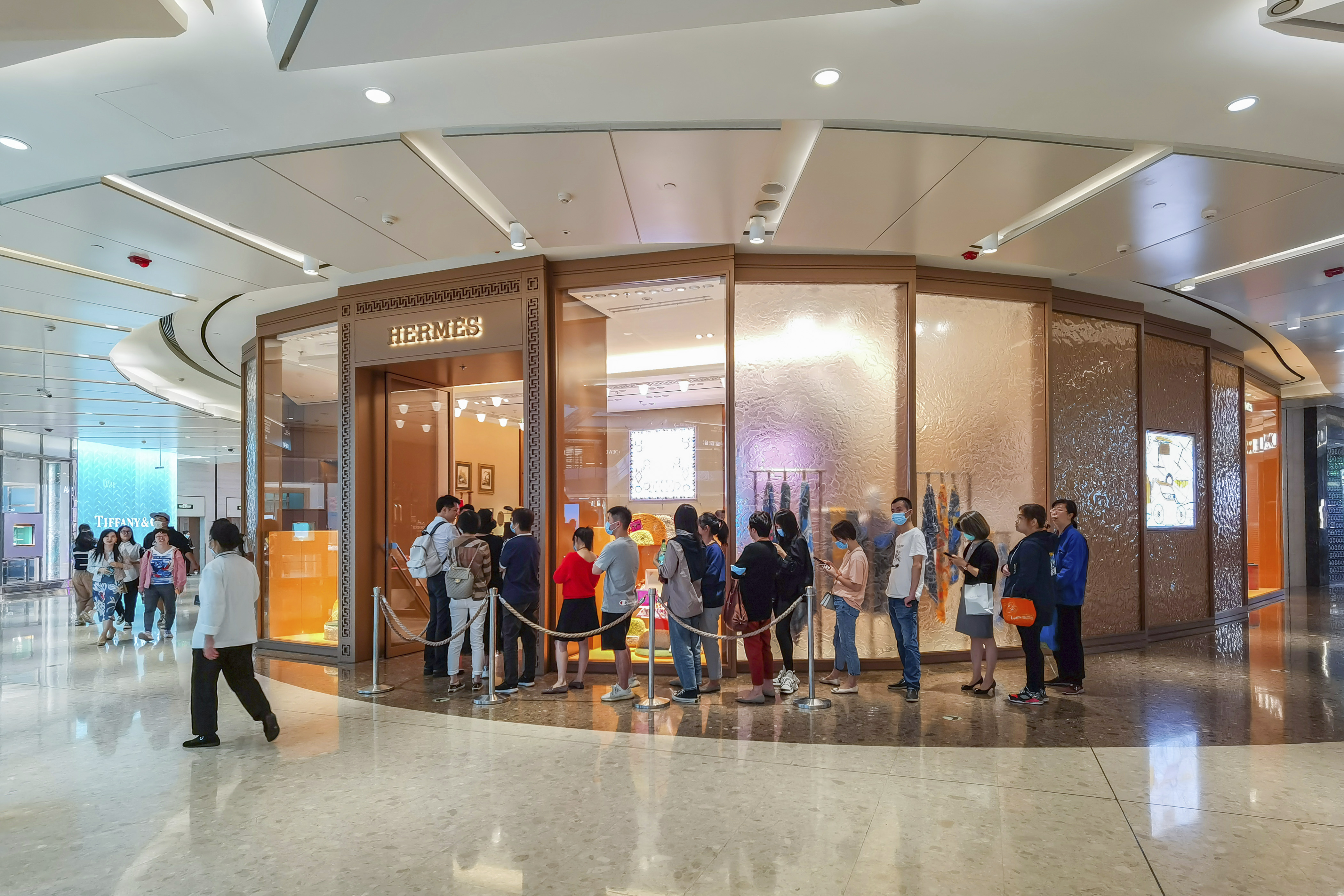 People line up in front of a Hermès store in Shanghai.  Wang Gang/AP

In real life, as soon as shopping malls reopened their doors in early March, queues began to form outside top brands such as Chanel and Hermès in Beijing and Shanghai.

In Guangzhou, Hermès hauled in $2.7 million on the reopening day of its 5,500-square-foot Taikoo Hui flagship store in April. Rare bags, including a diamond-studded Himalayan Birkin, were shipped to the location. VIPs from across the Guangdong province, the wealthiest area in China with Guangzhou its capital, descended on the store to purchase tableware, shoes, furniture and leather goods.

Louis Vuitton also saw a record-breaking monthly sales figure from its flagship in Shanghai’s Plaza 66, the largest in China. It made $22 million in August. It’s believed to be the highest monthly sales figure in China’s history. The record-high sales tally was boosted in part by the brand’s men’s spring 2021 show held in Shanghai at the beginning of the month.

As Chinese customers continued to show a big appetite for luxury bags, major brands raised prices several times throughout 2020, hoping to compensate for the losses from lockdown. Chanel, for example, ramped up handbag prices by a quarter, while Vuitton, Dior and Bottega have also adjusted their prices. Chanel said the coronavirus shutdowns have “absolutely no link with this decision.”

For brands with unprecedented levels of inventory to sell off, Tmall’s outlet platform Luxury Soho, which was quietly launched in April, helped brands accelerate their digital transformation, and bring in a new source of revenue.

Coach was one of the first brands to join this channel, and the discount goes as deep as 70 percent off. This move paved the way for the brand to become one of the three brands that hit the 100 million renminbi, or $15.2 million, sales mark during the Singles’ Day shopping festival on Tmall this year, alongside Cartier and Michael Kors. It also became the best selling brand in the bag and accessories category. 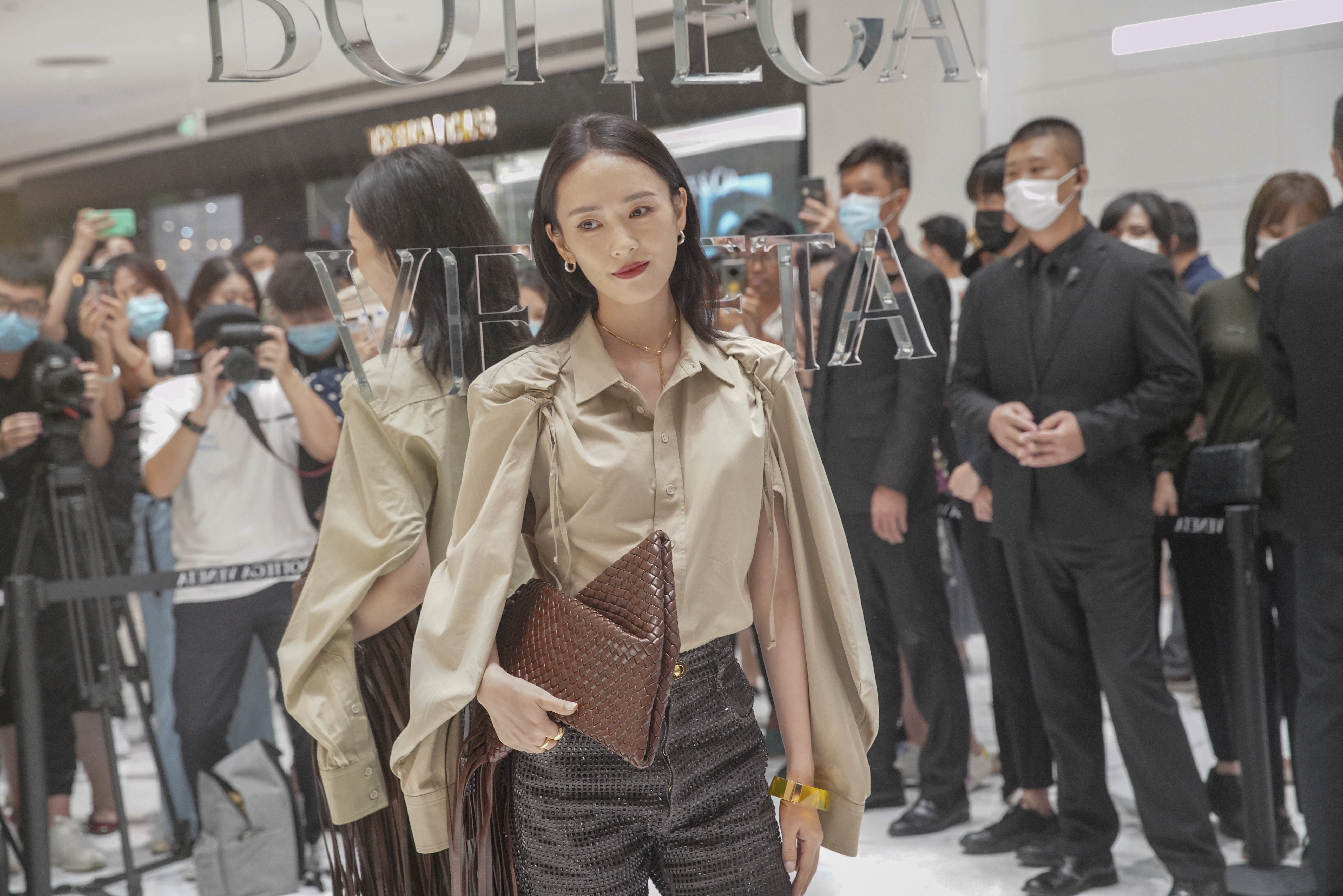 Compete With an Integrated Approach

McKinsey predicts Chinese consumers will account for 40 percent of the world’s luxury spending by 2025, but the growing demand is likely to be trapped in the country until 2021 due to pandemic disruptions.

Imke Wouters, partner of management consulting firm Oliver Wyman, also believes that “for luxury spending, the strong consumer sentiment will continue for the second half. Sales of luxury goods in China are expected to end the year above 2019.”

It’s indeed fascinating to hear stories about how well some brands are doing in China amid the pandemic. But the reality is far from rosy for new entrants looking to expand in the market.

Those that are now benefiting from China’s swift recovery have been in the market since the early Nineties, and have built a sizable local operation with innovative China-centric strategies.

Aaron Lau, chief executive officer and chairman at marketing and digital agency Gusto Collective, told WWD earlier that “foreign brands must bring their best expertise and resources to compete in probably the world’s most crowded and competitive marketplace where multinational, Asian and local Chinese brands converge,” adding that those who do not have an online-to-off-line infrastructure will have to fast forward their development.

“An integrated approach is absolutely key in China,” Lau added. “Chinese consumers are some of the most digitally connected in the world. They are informed and well researched when it comes to brands and products, and even though they are constantly connected, offline retail is critically important to brands providing a tactile, sensory experience to their Chinese customers. The bar is constantly pushed higher when it comes to off-line experiences in China. Tech and digital must play a key role in offline retail activation, too.” 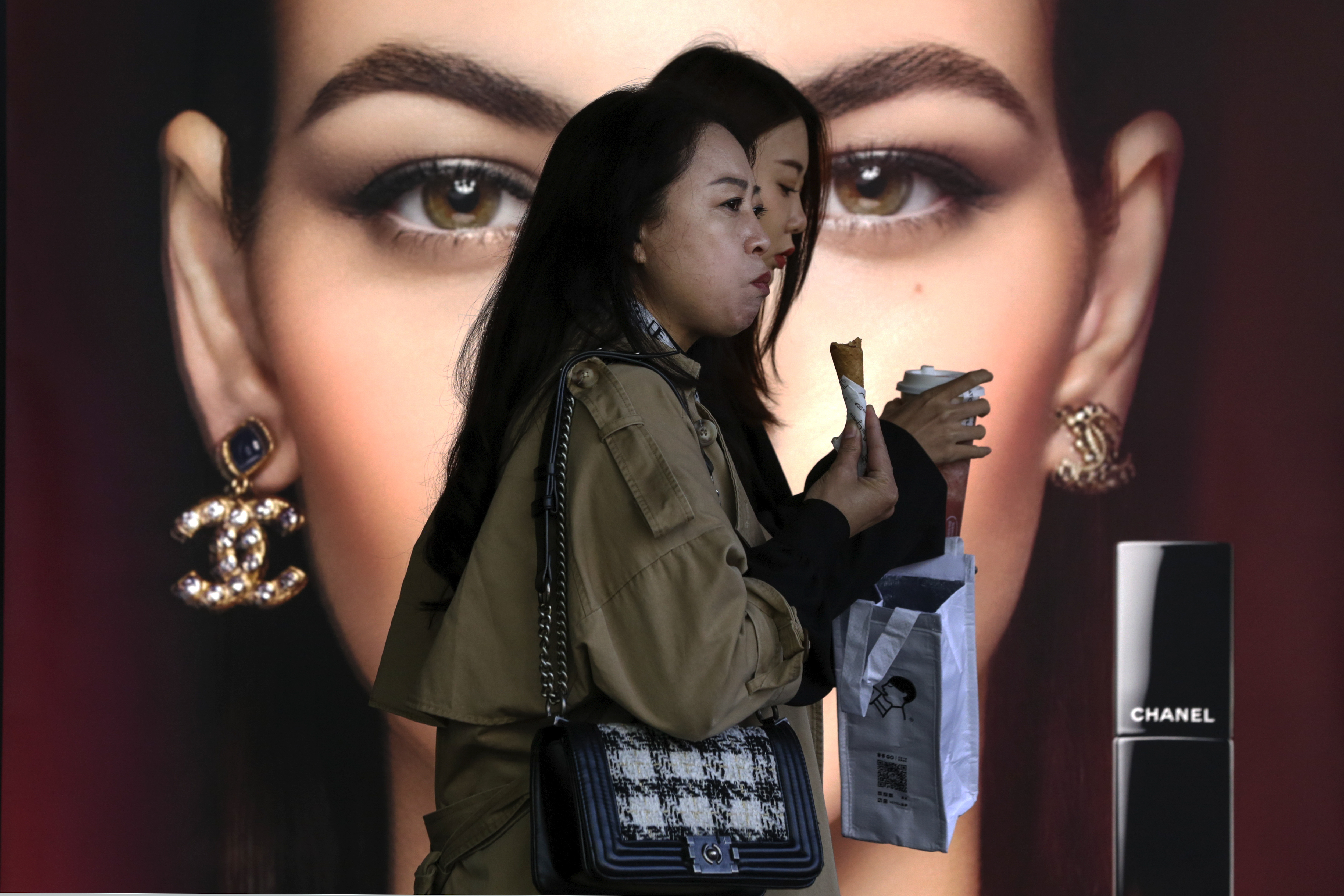 Looking beyond the first-tier cities, as COVID-19 disruptions reshuffle economic output in China, a handful of cities are performing better than the rest and attracting mega high-end retail projects amid the strong rebound in 2020. Heuritech, a fashion technology start-up, predicts that brands need to be agile enough to widen their purchase locations to China. Men and Gen Z, especially from lower-tier cities, are fast-emerging consumers, with a greater appetite for products tapping originality and national pride.

Therefore, new luxury hot spots such as Chongqing, Chengdu, Wuhan, Kunming, Sanya and Changsha are worth the attention of brands looking to expand their retail footprint in the coming year.