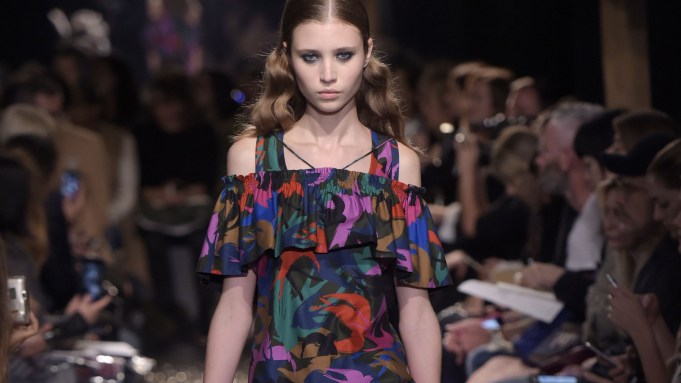 The return of trends from the Seventies, Eighties and Nineties are helping set up fashion stocks for a good year and Jefferies stock analyst Randal Konik, at least, is singing Hallelujah.

“After several seasons characterized by a lack of newness and a dearth of major fashion catalysts, we see several key trends emerging for spring, many of which are capable of driving consumers to restock their closets,” Konik said. “This, combined with a more favorable consumer backdrop, better weather and input costs tailwinds, support our view that 2016 should shape up to be a much improved year.”

The analyst scoured the mall and found lots of evidence of what’s old becoming new again. Retailers could use it a boost after a very tough holiday season and a generally lackluster consumer coping with lower incomes despite the improving economy. Many have been keeping an eye out for tough times ahead, making Konik’s outlook all the more welcomed.

His top trends for spring are:

• High-waisted (and short) shorts for girls

• Short shorts for guys, too

Among those, the move toward flared denim could have a particular impact if it holds.

“After years of skinny denim and multiple failed attempts on the part of retailers to push flare/wide-leg denim on the consumer, it appears the consumer is finally read to embrace it,” Konik said. “If this silhouette shift were to truly catch on, it could be the type of transformational trend capable of truly reigniting the market, similar to what skinny denim did nearly a decade ago. Still, we don’t think consumers are ready to fully ditch their skinny jeans yet, and expect it to take some time for this trend to be mainstream.”

The analyst noted that this influx of new old fashions comes just as the consumer backdrop is improving, as prices stabilize, sourcing becomes easier for retailers and weather is seen as more seasonable than it has been.

It’s the kind of convergence the fashion industry’s benefited from before. In 2012, spring weather was warm, colored denim was gaining and costs for retailers were easing as cotton grew cheaper. During that year, Konik noted that the average apparel company stock returned 26 percent, twice the 13 percent growth rate seen in the S&P 500.