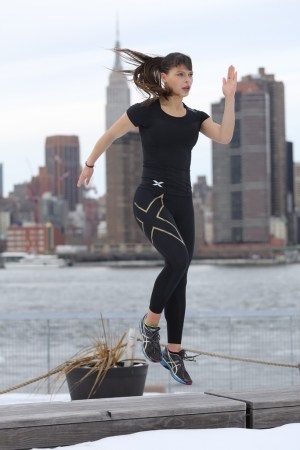 The Australian-based activewear brand that specializes in engineered compression apparel is launching its first global marketing campaign. The print, social media and point-of-sale initiative centers around the heart and includes a five-minute film, “Heart Not Hype,” that tells the story of athletes training in 2XU apparel. Compression apparel has been proven to improve circulation and blood flow to the heart, allowing athletes to train harder and recover quicker.

“We’re a household name in Australia,” Aiden Clarke, cofounder and sales and marketing director of 2XU told WWD. “But few people know us here. Our big, audacious goal is to be a big sport brand in America.”

Clarke said 2XU, which is celebrating its 10th anniversary, is carried at Dick’s Sporting Goods, REI and specialty stores such as Paragon. Sports Authority just signed on to carry the label as well, he said. “Globally, we’re in 4,200 doors but in the U.S., we’re just moving past 600 on our way to 1,000.”

L Capital Asia, the private equity arm of LVMH Moët Hennessy Louis Vuitton, bought a 40 percent stake in the brand for around $75 million at the end of 2013.

Until fairly recently, Clarke said 2XU — pronounced “two times you” — was “only talking in high-performance language,” he said. “We’re very technical when we talk about fabrics and filaments. But consumers’ eyes glaze over. We’re now speaking in a more succinct way.”

Because of its history with compression, Clarke said 2XU wants “to champion the heart. We want to migrate the message from physiology to emotion.” Taking a page from the book of Under Armour and Nike, the film features ballerinas, tennis players, runners, cyclists, triathletes, rowers and handicapped athletes — dressed in the apparel performing their sport. Much of the film has a sound of a beating heart in the background. A voice-over says: “I don’t want to be famous for my face, I want to be famous for my heart.”

2XU launched a Web site on Tuesday that is airing the film and running a contest for consumers to share their stories about putting their heart into their performance. Winners will be flown to California for a high-performance training camp later this year. The film is also being shown on AOL. The print marketing plan is still being determined.

The campaign was unveiled during the brand’s first Heart of Performance Summit here on Tuesday where doctors and athletes spoke to the benefits of compression apparel. Shona Halson, the senior physiologist for the Australian Institute of Sport, said compression has been proven to improve performance by 2 to 3 percent. While that number may not sound like much, she said, it’s “huge” when races are won by fractions of seconds. “Compression does improve performance to the degree that it matters to the athlete,” she said.

Clarke said 2XU did not invent compression — the medical industry has been using it for hundreds of years — but by offering it in sports fabrics, activewear brands can bring those same advantages to athletes at half the weight and in fashionable colors and styles.

“Our job is to explain to the exercising public that this is not a fad,” Clarke said. “And we’re here today to begin that storytelling.”