By Miles Socha and Jennifer Weil on March 3, 2006
View Slideshow 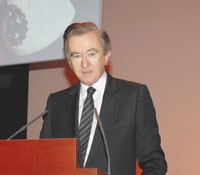 PARIS — Boasting that LVMH Moët Hennessy Louis Vuitton is “light years ahead of the competition,” Bernard Arnault announced a 21 percent jump in 2005 net profits to 1.44 billion euros, or $1.79 billion, as sales of Vuitton denim handbags and Dom Perignon champagne accelerated at yearend.

The luxury titan also took a few veiled potshots at rival Gucci Group — and dampened speculation the world’s largest luxury group might be gearing up for another acquisitions spree.

“We will be cautious in this respect,” Arnault said. “Before buying a company of any significance, one has to make such an acquisition in the interests of shareholders.”

During a 40-minute address Thursday to an auditorium packed with analysts, the bullish LVMH chairman and chief executive officer touted a bright economic environment worldwide, with European monetary policy characterized as a bigger potential menace than avian flu.

Arnault said the group continues to record double-digit revenue gains this year and has already set an objective of “very significant growth” for results in 2006.

“We are headed for a year of strong growth,” he said. “We continue to improve our market share in all countries where we are present.”

The results, ahead of analysts’ expectations, sent shares of LVMH up 3.7 percent to close at 79.35 euros, or $93.63, at current exchange, on the Paris Bourse.

At the meeting Thursday, Arnault spent much of his time trumpeting the group’s star brands, particularly the high-flying cash cow Louis Vuitton, and its most profitable brand, Dom Perignon, which had strong demand for its 1998 vintage, backed by a sexy ad campaign shot by Karl Lagerfeld.

Citing strong accessories sales at Donna Karan International, he said that company has now “rounded the corner” to a growth phase that will see improved performance in the U.S. and a better international profile. “We believe Donna Karan can do as well as Ralph Lauren in terms of profits,” he said. (In February, Polo Ralph Lauren reported that its net income rose 47 percent to $245.6 million in the nine months ended Dec. 31 on a 15.5 percent increase in sales to $2.77 billion.)

And Arnault touted Fendi as “a new star in the fashion and leather goods segment” with sales approaching 300 million euros, or $354 million, and an elite positioning that will leave rivals in the dust. He characterized Fendi’s potential as greater than Italian brands that are “leaving the genuine luxury universe” and pursuing a “more mass” approach with lower-priced products and sales promotions.

Those weren’t his only boasts. He said Sephora, fueled by 20 percent same-store sales growth in the U.S., “can become a small Vuitton, even if it’s not all luxury goods.” And he dubbed Rolex as “the only serious competitor” for fast-growing Tag Heuer, which is introducing higher-priced products and banking on the star power of Brad Pitt, Uma Thurman, Tiger Woods and Maria Sharapova in its ad campaigns.

Arnault acknowledged other brands need work, including Givenchy, where “we haven’t quite reached the turning point. We are getting our crew ready for that change in course.”

Both Arnault and Yves Carcelle, chairman and ceo of Louis Vuitton, underlined strong growth potential for the brand, which now introduces new products on a four- to-six week cycle and will open stores in four new countries this year: Ukraine, Hungary, Norway and Aruba in the Caribbean.

Vuitton also plans to add three stores in China this year to the dozen it already has, and Carcelle said there are at least 10 to 15 Chinese cities it has yet to conquer. He characterized growth there as “close to infinity.” Mainland Chinese already represent Vuitton’s third-largest clientele.

Carcelle noted that denim handbags, first launched on the runway, would become a “permanent pillar” of the company’s handbag range, and he said the cruise collection and sunglass ranges helped drive traffic in the run-up to the holidays.

During a question-and-answer period, Arnault was peppered with questions about acquisitions following remarks last May that buying brands was on his mid-term agenda. One analyst, spying a Bulgari display in a DFS store pictured on a presentation screen, used this as an entrée to ask about widespread rumors the Roman jeweler could be in play. Arnault sidestepped that question. He also said any “war chest” would be funneled into “bigger dividends” and stressed, “If we consider an acquisition, it has to be really attractive.”

Disposals are unlikely, too, including its retail holdings once described as noncore. “It’s a bit of a nonissue,” Arnault said. “Had we not turned around the [retail] businesses, we would have sold them.” However, he allowed that if Sephora achieved 30 percent operating profitability and he received an attractive offer, he might consider it.

Among the company’s beauty brands, Arnault concentrated his discourse on “star” Parfums Christian Dior, which he still sees as having enormous potential thanks to products like Capture Totale skin care, fronted by actress Sharon Stone. Arnault said the Dior brand ranks among the top three in skin care in Japan and is strong in Europe and China. “The only point we’re not yet satisfied is the U.S.,” he said, adding the company will concentrate its efforts there.

Separately on Thursday, Christian Dior Couture reported a 6 percent increase in profit from continuing operations to 53 million euros, or $66 million. The gains for the fashion house came despite heavy investments in its network of boutiques, which now number 194. Last year’s program included 10 new stores and 22 renovations or extensions.

Toledano said 2006 has started off with “strong double-digit growth” everywhere, with “Gaucho” bags and men’s wear among the strongest categories. “The outlook for 2006 is very good,” he said.