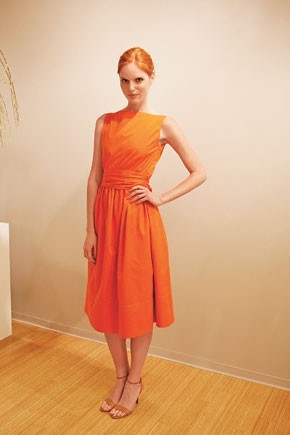 Liz Claiborne Inc. took whopping goodwill write-downs of $451 million in the quarter ending Dec. 29, which drove the group to a fourth-quarter loss of $435.7 million, or $4.55 a share, compared with net profits of $73.2 million in the fourth quarter of 2006.

“The company had accumulated significant goodwill balances in this segment in recent years resulting from its focus on acquisitions during that period,” said Claiborne, which has spent the last year reviewing its brand portfolio. “Actual and projected performance and cash flows in this segment, as well as the impact of the sale or planned sale, licensing or closure of the brands under strategic review, no longer supported this goodwill balance.”

Excluding the write-down for the brands the company has sold and other primarily wholesale brands it continues to own, results for the quarter were consistent with the losses the firm warned of a month ago.

At that time, Claiborne estimated losses per share would be in the range of 90 cents to $1.

Sales for the quarter slipped 3 percent to $1.21 billion from $1.25 billion, as 20 percent losses in partnered brands offset the 18 percent gains in the direct brands segment, which includes Juicy Couture.

“The fourth quarter proved to be very difficult for our partnered brands segment,” said chief executive officer William L. McComb. “We made great progress managing inventories, but markdown pressure was significant. Our sales to Macy’s department stores now represent less than 10 percent of our total net sales, and we have taken significant steps to improve this business by announcing the design initiatives with Isaac Mizrahi for the Liz Claiborne brand and John Bartlett for the Claiborne men’s business, both for 2009. We’ve also taken action to improve the sales and earnings engine in partnered brands for 2009 through the announcement of the Dana Buchman launch at Kohl’s.”

Sales for the year fell to $4.58 billion from $4.99 billion, or $4.64 billion on an adjusted basis. The adjustment excludes expenses from streamlining, non-cash charges associated with goodwill and trademark impairment, expenses from eliminating some cosmetic offerings, and losses from the strategic review processes, but includes the results of discontinued operations.

McComb had warned 2007 would be a turnaround year. Claiborne had a big to-do list: restructuring and cutting costs; dividing the company into high-growth-potential direct brands (Juicy Couture, Lucky Brand, Mexx and Kate Spade) and partnered brands, and putting 16 of the partnered brands under review and selling many of them, including Ellen Tracy, Prana and Laundry.

Although the company has taken financial hits this year, Claiborne’s board has unequivocally said it stands by the turnaround plan and its ceo.

“The entire board has confidence in Bill, and we are very clear on the path we’ve chosen,” board chairwoman Kay Koplovitz told WWD last month. “We know the macroeconomic environment has changed since we set the targets, but the strategy we’ve chosen is correct and the execution is correct. We realize we have a lot to do, that it can’t be done overnight, and we are focused on meeting our targets over a three-year period.”

In the fourth quarter, the direct brands and partnered brands again played out as McComb’s self-described “tale of two cities.”

Sales at the partnered brand dropped 20 percent to $559 million as a result of retailers’ conservatively buying brands under strategic review, and declines at the Liz Claiborne, Claiborne and Monet businesses. These declines were somewhat offset by the new Liz & Co. exclusive brand at J.C. Penney Co. Inc. and the licensed Usher fragrance launch.

Led by Juicy Couture, the vendor’s direct brand segment grew 18 percent to $649 million in the fourth quarter. Juicy sales skyrocketed 43 percent to $170 million. Mexx saw gains of 12 percent to $334 million, but excluding currency gains for the European-based retailer, sales slid 1 percent to $295 million. Lucky Brand sales fell 10 percent to $114 million, driven by decreases in wholesale and slightly negative comps. Kate Spade, which was acquired in December 2006, had $31 million in revenues.

“Everyone knew these businesses they had weren’t worth what they paid for them because they weren’t generating what they thought they would,” said analyst Jennifer Black. “The impairment charge is not that relevant: What we care about is the guidance for 2008, once they’ve taken this impairment charge, and $1.50 to $1.70 probably is realistic.”