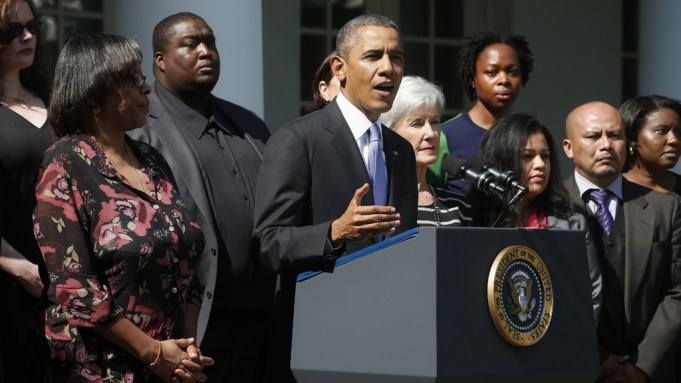 The developed and developing nations of the world engaged in a bit of role reversal in 2013.

More advanced economies made some progress on their long, slow road to recovery following the 2008 financial crisis and the more recent chaos in the euro zone.

Meanwhile, China, the world’s second-largest economy after the U.S., pulled back from its stratospheric growth rates and, in a move that already has impacted some of the aspirations of Western luxury firms, began a crackdown on ostentatious spending.

The shift in economic momentum wasn’t restricted to China, though.

“The global growth constellation is changing,” proclaimed the International Monetary Fund in its October report “World Economic Outlook: Transitions and Tensions.” “Activity in the major advanced economies has started to accelerate from subdued levels. By contrast, growth in China and many other emerging market economies in Asia and Latin America, and to a lesser extent in the Commonwealth of Independent States [previously part of the U.S.S.R.], has cooled, after a surge in output beyond potential following the recovery from the Great Recession.”

Among the BRIC, or Brazil, Russia, India and China, nations, even Brazil — which is expected to grow at a 2.5 percent clip this year — has seen higher inflation that could weigh on consumption, while depreciation of the currency has helped to make it more attractive to outside investment, according to the IMF.

The struggle to put larger economies back into growth mode hasn’t been without challenges, some of them self-inflicted. In the U.S., ongoing political attacks on the Affordable Care Act laid the groundwork for a 16-day shutdown of the federal government, the third longest in the country’s history. With no budget deal to fund operations past Sept. 30, the government discontinued nonessential operations, and in the process sucked $24 billion out of a still-struggling economy.

The shutdown and continuing debate — stimulus versus austerity — took a large bite out of consumer confidence, just as retailers were getting ready to bring out their holiday finery in a push for seasonal sales that continue to be difficult to attract without promotions. The Conference Board’s Consumer Confidence Index fell from 80.2 in September to 72.4 in October and continued its downward trend in November, when it registered 70.4.

Lynn Franco, director of economic indicators at The Conference Board, noted in the aftermath of the shutdown, “Similar declines in confidence were experienced during the payroll tax hike earlier this year, the fiscal cliff discussions in late 2012 and the government shutdown in 1995-96. However, given the temporary nature of the current resolution, confidence is likely to remain volatile for the next several months.”

That could hardly be good news for a U.S. economy that derives more than two-thirds of its power from consumer spending.

Of course, that was before House and Senate conferees on Dec. 10 said they’d reached an agreement on a new budget.

Unemployment in the U.S. peaked at 10 percent in October 2009 following the financial quake of September 2008, but its decline has been slow and, in some ways, a double-edged sword. When word arrived on Dec. 6 that the U.S. economy had added a better-than-expected 203,000 jobs in November, sending the unemployment rate to its lowest level in five years, stocks responded positively, with the Dow Jones Industrial Average picking up 1.3 percent to close above the 16,000 mark at 16,020.20. Then again, stock prices and the outlook for corporate profits haven’t been an area of weakness for the economy: The Dow was up 22.3 percent for the year through that date.

But lurking in the background has been a fear among investors that good news on the U.S. jobs front could lead the Federal Reserve to “taper” the bond-buying program that has helped rev America’s economic engine in the absence of meaningful stimulus from Congress during the last three years of the Obama presidency. The Federal Reserve Open Market Committee is scheduled to meet this week and the markets will be watching closely for any sign of a pullback by the Fed in the months to come.

The jobs gains are but one element of a wider discussion about wealth distribution in the U.S. Liberal economists and think tanks are fond of pointing out, as Obama did in September, that 95 percent of income gains since the start of the recovery in 2009 have gone to the wealthiest “1 percent.” For luxury apparel brands and retailers, that’s been good news as improvements in stock portfolios and more recently in real estate values have helped sustain luxury spending, from cars to clothes.

Still, it’s left disposable income constrained among the less affluent, making it difficult for many retailers who cater to working-class adults and teens to make their numbers each month.

A similar dynamic has emerged in the 17 nations that make up the euro zone, in which vastly different economies share a common currency. Unemployment in the zone fell for the first time since early 2011 in October, but hardly to a level that would signal a strong recovery. The 12.1 percent level of two months ago meant that 19.3 million residents of the area were without jobs, and the number was 26.7 million among residents of the 28 nations in the European Union. Austria and Germany enjoyed the lowest rates — 4.8 and 5.2 percent, respectively — while the rates were highest in Greece (27.3 percent) and Spain (26.7 percent).

As in the U.S., youth unemployment remains at higher levels, again topped by Greece and Spain at 58 and 57.4 percent, respectively, according to Eurostat, the keeper of statistics for the EU. Italy, still battling recession along with much of the rest of southern Europe, had a 12.5 percent unemployment rate.

The possible political fallout from European joblessness was driven home this month when Eurostat estimated that about 124.5 million Europeans — just under one-quarter of the population — are at risk of poverty or social exclusion.

As in the U.S., policy matters are at the core of euro zone battles with Germany, the largest and strongest economy in either the zone or the EU very much in the driver’s seat. Even with a slight reduction in October, Germany’s trade surplus has been a key ingredient in keeping the euro crisis from becoming more severe and probably in keeping all nations aligned with the currency, even though it exacted fairly harsh and unpopular austerity measures from other euro nations to do so. Now other nations are pushing for Germany to limit the surplus in the hope that it will let them in on some of the economic growth to be had in Europe.

Outside the zone, after several years of emphasis on austerity from the government of Prime Minister David Cameron, U.K. economists were encouraged by news this month that Great Britain’s economy grew 0.8 percent for the quarter ended in November after a 0.7 percent growth rate in the prior three months. The IMF expects the U.K.’s gross domestic product to grow 1.9 percent next year, slightly below the projected U.S. growth rate of 2.6 percent.

Under Prime Minister Shinzo Abe, Japan is one of the few large economies — the world’s third largest — to try the stimulus path as it combined 5.5 trillion yen, or $64 billion at current exchange, in stimulus spending and 1 trillion yen, or $11.6 billion, in tax cuts, in addition to a 20 percent depreciation in its currency, to get its economy moving. But disappointing growth of 1.1 percent in GDP in the third quarter was seen as a blow to so-called “Abenomics,” and a boost in consumption taxes, due in April, has some economists on edge about Asia’s second-largest but by far most mature economy.

The eyes of the world remain focused on China, not only for the implications of its own ability to sustain double-digit growth, but for the effects that any kind of pause in that growth could have on other markets. Observers were encouraged by an expansion of 13.7 percent in retail spending in November, which included Chinese Single’s Day on Nov. 11, when sales at Alibaba’s Taobao and Tmall platforms exceeded $5.75 billion. By comparison, online sales for Cyber Monday, Dec. 2, in the U.S. were up 16 percent to about $2.29 billion, according to Adobe Digital.

China is on track to become the world’s largest economy, supplanting the U.S., by 2025, according to a recent report by Frost & Sullivan, but it’s pushing for a greater emphasis on consumption — even if not of the conspicuous variety — and less dependence on investment and exports as it seeks a more sustainable road map for growth than its current production-based model. China also faces the challenges of a rising wages, causing some firms to switch production from the country, and an aging population. It has attempted to counteract that somewhat by relaxing the one-child rule it enforced for decades.

Ultimately, the IMF believes, prospects for continued global recovery in 2014 will all come down to China.

“The main threats to the outlook are a global economic downturn or a further deceleration of growth in China or other major emerging markets that could weaken exports through lower commodity prices or reduced inflows of aid and foreign direct investment,” the IMF concluded.