By David Moin and Jeanine Poggi on May 15, 2008
View Slideshow 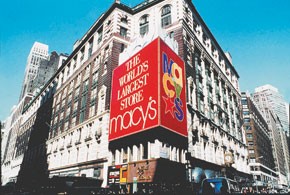 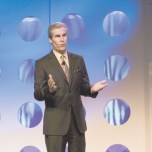 Macy’s Inc. took it on the chin in the first quarter of 2008, posting a loss of $59 million, or 14 cents a share, and citing weak sales in women’s, the difficult economy and consolidation costs.

Sales for the quarter ended May 3 declined 2.9 percent to $5.75 billion and fell 2.6 percent on a comparable-store basis.

Still, Terry J. Lundgren, Macy’s chairman, president and chief executive officer, said that in April and May there has been a bit of an uptick in business and he remains confident Macy’s is on a growth track in the long term. “Even though we had a small negative number for the quarter, it appears that we are actually taking market share,” Lundgren told WWD. “Our business got better in April, like most [retailers], and we started off May with a good Mother’s Day week. We’re not expecting miracles. We’re expecting consumers to still be cautious in their spending.”

Further impacting the quarter’s earnings, the company put aside a $23 million reserve to potentially settle a wage and hour class-action lawsuit in California. Excluding the unusual costs, Macy’s would have earned 2 cents a share, though that’s still significantly down from a year ago.

By division, Bloomingdale’s had a tough quarter, but is doing better than Macy’s, executives said.

Despite the negative numbers, officials at the 850-unit chain contended it is outperforming several competitors, based on comp-store sales figures reported for the quarter. Officials wouldn’t specify which competitors, but Kohl’s Corp., J.C. Penney Co. Inc., Nordstrom Inc., Dillard’s Inc., The Bon-Ton Stores Inc. and Belk Inc. are tracking below Macy’s, while Target Corp. and Wal-Mart Stores Inc. are running ahead largely due to their grocery offerings. Two years ago, when Macy’s converted many former May Department Stores Co. units to the Macy’s nameplate, some competitors said shoppers defected to them.

Macy’s said it is keeping inventories down and in line with demand, running about the same number of price promotions as a year ago, and that it remains satisfied with its cash flow, ending the quarter with $366 million on the balance sheet.

Officials said they saw signs of an uptick this month, and for the fall are expecting a lift from Macy’s 150th birthday celebration as well as from selling Tommy Hilfiger apparel exclusively.

Asked what’s wrong with the women’s business, Lundgren replied: “Women’s apparel has definitely been challenging for specialty as well as department stores and others. In a time when the consumer is being stretched, products more likely to perform are accessories and cosmetics.”

He explained that consumers opt for handbags or shoes because they can use them several days a week, unlike apparel.

“Young men’s in particular is really coming on strong. It’s been performing well for both Macy’s and Bloomingdale’s,” Lundgren added. He cited Tommy Hilfiger in men’s and women’s; Donald Trump’s dress shirts, ties and cuff links, and Emporio Armani’s men’s underwear as standouts.

A couple of weeks ago, the retailer held meetings in New York with 750 key vendors to educate them on the My Macy’s localization program involving pumping up the field organization to better tailor the merchandise distribution to local fashion preferences and sizes.

Lundgren also said the company is working on a project to provide vendors with a faster and easier way of tracking their sales at Macy’s. “In the fall season, we will have a Macy’s ‘partner portal’ so [for example] Guess jeans managers can see the performance of Guess jeans on a by-store basis,” including sell-throughs and inventory levels. “This will be real-time information, daily. It will be a Web site for several hundred vendors. It’s a huge project,” Lundgren said.

While grappling with the current difficult state of affairs, Macy’s still demonstrated a concern for the long term, announcing this month three additional stores in Arizona and one in Las Vegas; naming Daniel Edelman, a veteran Macy’s division principal, to head up efforts to explore international growth for Macy’s and Bloomingdale’s, and being more open-minded to lifestyle centers and other new formats representing alternatives to the traditional regional mall.

“I think the mall developers are getting creative and that’s good for our business,” sparking Macy’s to consider smaller boxes and one-level units, as opposed to the standard multilevel stores, Lundgren said. Macy’s only has about 12 stores in lifestyle centers.

“Our focus right now is entirely on building the comp-store sales in this country, but we would be remiss not to take advantage of an international opportunity, you know, four, five years down the road,” said Karen M. Hoguet, executive vice president and chief financial officer, during a conference call.

In addition, Macy’s affirmed its earning guidance for the year, projected at $1.85 to $2.15 a share, excluding onetime division consolidation costs seen at another $60 million for the remaining three quarters. The retailer also projects comps at negative-1 percent to plus-1.5 percent for the year overall.

In February, Macy’s unveiled a major consolidation, from seven to three divisions: Macy’s North, Macy’s Midwest and Macy’s Northwest. The company booked $87 million in consolidation costs in the quarter, revealed in February, which is expected to save Macy’s $100 million annually, beginning next year, and approximately $60 million this year.

Within women’s, Hoguet said Macy’s continued to see strength in contemporary and denim-based brands. “More casual looks are what is selling, especially value-driven, pick-me-up items that refresh the customer’s wardrobe. Serious outfit and structured career dressing are not selling as well. And, while value appears to be important in this economic environment, highly desirable premium brands are selling very well. I should also add that our private brands performed well relative to other brands in the quarter since they represent affordable fashion for our customers.”

She said sales were strongest last quarter in the Northeast and Texas and weakest on the West Coast and in Florida.

Macy’s also continues to be affected by credit card customers. “While we sold our credit business to Citi, our economics are still impacted by the profitability of the portfolio, albeit to a much-reduced degree than had we not sold it. The key challenge with our credit portfolio is the fact that bad debt remains high and we are now experiencing additional bankruptcy exposure. We and Citi are working together to take actions to mitigate the risks,” Hoguet said.

Showing some slight optimism about the economy, Hoguet said Macy’s is “expecting the economic environment to remain challenging at least through the third quarter.” However, she added: “We do not know when the environment will improve and, therefore, the key will be maintaining flexibility. What that means is that our merchants must stay liquid and be conservative in placing inventory orders. And we also have to have contingency plans in place to be ready to reduce expense in [capital expenditures] further should our sales trends not start to improve.”

Coupons and promotions were at about the same level as last year, and Macy’s doesn’t expect much of a benefit from tax rebates.

The company also is bolstering bloomingdales.com and discontinuing the Bloomingdale’s by Mail catalogue operation next year, which Macy’s believes will have only a minor impact on sales and no impact on profits.

Hoguet also debunked rumors that Macy’s was planning to announce a major store closing program. “I don’t envision that,” she said.

“At some point, the economy will turn around, and we will be very well positioned when it does.”

Standard & Poor’s wasn’t pleased with the results, however. The rating agency maintained its “sell” recommendation on the shares, and said the earnings per share reported fell short of its estimate, and that the same-store sales decline was larger than expected. “Given remerchandising efforts in private brands, we are disappointed that women’s ready-to-wear was one of Macy’s weakest selling categories. Without must-have offerings, we believe it will be tough for the company to arrest its negative same-store sales trend despite easing comparisons.”