Intimates brand Aerie continues to be the company's biggest growth driver, with revenues growing 32 percent year-over-year in the most recent quarter.

Jennifer Foyle leads both the Aerie and American Eagle teams.

Aerie is securing its place on top of the retail food chain.

In fact, in the most recent quarter, Aerie, which is owned by American Eagle Outfitters Inc., grew 32 percent in total revenues, while digital demand surged 113 percent, even during the pandemic. Aerie is now the second largest lingerie e-tailer, according to market research firm The NPD Group. Meanwhile, shares of parent company American Eagle Outfitters have risen nearly 90 percent since April, the height of the nationwide lockdown.

“When the crisis started, we saw engagement with Aerie actually accelerate,” Jennifer Foyle, American Eagle Outfitters’ chief creative officer and Aerie global brand president said during WWD’s Retail Forum: Digital’s Next Wave, late last month. “New customers and brand engagement are at all-time highs. Aerie is well on its way to our billion-dollar target, which we could easily hit this year.”

In the current cluttered landscape — one marked by numerous retail bankruptcies, mass store closures, a global health crisis and ongoing work-from-home mandates — this has been no easy feat.

But some of these things have actually helped the intimates and loungewear brand grow: With so many consumers stuck at home for months on end, suddenly the need for loungewear, wireless bras and underwear has become all the more relevant. Meanwhile, the global health crisis helped accelerate a growing activewear movement, as a means to stay healthy and as a new recreational pastime.

Over the summer, Aerie launched activewear subbrand, Offline by Aerie. “The response has been nothing short of spectacular,” Foyle said, adding that “the timing was perfect” for the July launch.

“Over the past years, we’ve seen leggings and activewear fly out of our stores. Our customers are asking for more and more,” Foyle continued. “We see an incredible opportunity in this exciting growth category, with a $16 billion market opportunity.”

Part of the brand’s appeal seems to stem from the idea of celebrating flaws, hence the crooked “i” in the Offline logo.

“Imagine an athletic brand talking about imperfection?” Todd Mick, executive director at NPD, said during a recent Curve webinar. “That is just so anti-Nike, Adidas [and] Under Armour. But this is just so much part of Aerie’s DNA, it makes sense.”

Aerie’s inclusive ethos was established long before the pandemic, and in 2014, the brand began its AerieReal campaign, ending the practice of airbrushing models.

“Women were getting tired of being held to unrealistic standards,” Foyle said. “We wanted Aerie to be more inclusive; we wanted the brand that women could truly identify with and strongly feel connected to.” 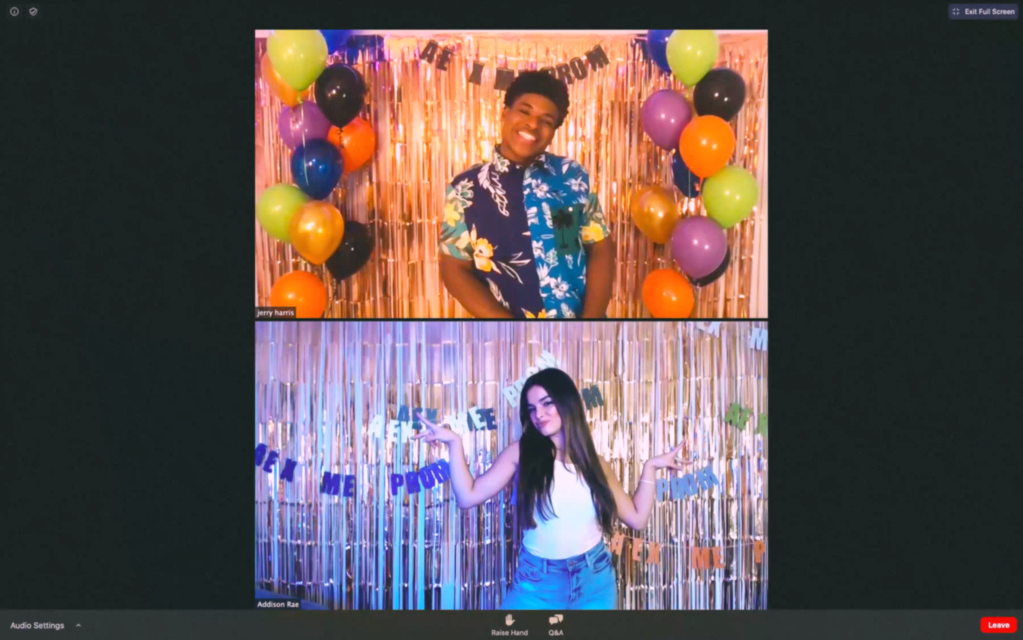 American Eagle Outfitters continues to engage shoppers during the pandemic with a number of virtual events, such as spring’s virtual prom.  Courtesy Photo AEO

To do that, Aerie has used social media to create a community of loyal fans. During quarantine, the brand asked shoppers to send in videos and photos of themselves to be shared across Aerie’s Instagram and TikTok accounts, among other platforms.

“We give real women an opportunity to see themselves reflected in our campaigns, on our web site, in our stores and on our social channels,” Foyle said. “This little idea has turned into so much more. It’s a movement that has empowered millions of women and girls to let their real selves shine.”

Despite the brand’s success, Foyle said Aerie still has room to grow.

“We have incredible potential to further expand market share in many areas,” the chief creative officer said. “We still have significant white space in core areas, like intimates, swim and lounge.”

Aerie’s market share of underwear is just 9.2 percent, while bras are 3.1 percent and swim is 2 percent.

“This represents a combined $40 billion addressable market,” Foyle said. “And that doesn’t even include activewear. That’s a huge runway for our growth. It all comes back to creative products and a strong customer connection. We’re delivering products they want to live in, which translates to spend.”

“Other brands may be scaling back, but we’re pushing ahead, broadening our reach and growing our footprint,” Foyle said.

Not only is Aerie opening more stores, but the brand plans to open two Offline by Aerie stores this fall, one in Nashville, Tenn., and one in New Jersey. “We’re going to position ourselves where we can compete,” Foyle told WWD. “We’re definitely going to monitor where our competition sits, too.

“We know that the stores increase brand awareness, customer reach and average spend,” Foyle said. “Today, [Aerie] has only 23 states with retail space of 10,000 square feet or more. So that leaves us with an enormous opportunity out there.”