After 6.7% Drop in Net, Gap to Refocus Women’s on Classics

Gap Inc. reported a 6.7 percent drop in first-quarter profits and said it wants to return to the classic iconic looks in women's that put the retailer on the map. 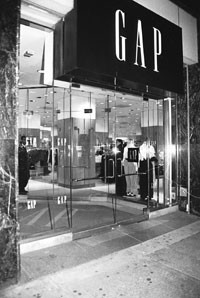 After Gap Inc. delivered a self-described disappointing — though slightly better-than-expected — 6.7 percent decrease in first-quarter profits Thursday, management said it is committed to improving its merchandise mix, which includes returning Gap’s women’s business to the classic, iconic looks that put the retailer on the map.

“We understand the issues in each of our businesses, and our teams are making the necessary changes to improve,” said Paul Pressler, president and chief executive officer of Gap, on a post-earnings conference call with investors and analysts. “At Gap we are pleased with the progress we’ve made in the men’s business but are not yet satisfied with our women’s products. In our efforts to serve more occasions for women, we broadened our merchandise and design perspective, going a bit outside Gap’s iconic style aesthetic.”

In the quarter ended April 30, the San Francisco-based company earned $291 million, or 31 cents a diluted share, a penny ahead of analysts’ estimates for 30 cents. Comparatively, Gap earned $312 million, or 33 cents, in last year’s first quarter.

In order to improve results at Gap, Pressler outlined three areas the brand will focus on during the rest of the year:

“Anecdotally, we’re hearing positive feedback from Denver customers, who tell us that the stores look and feel fantastic. They’ve been especially excited about denim, which is showcased in the new store design. We are encouraged by strong average unit retail transactions, fitting room usage is up considerably, and customers are spending more time in the stores on each visit,” Pressler said.

At Banana Republic, Pressler said that while blazers, denim and knits performed well during the quarter, female customers didn’t feel comfortable putting outfits together. As a result, Banana will offer more versatile items this fall, as well as more neutral colors.

At Old Navy, Jenny Ming, president of the division, said on the call that its mix of merchandise was challenged during the quarter. “We spent time learning, and we are applying our findings to our products and marketing strategies. And one of the areas that we are improving is having a better balance of inventory invested in uptrending items and reducing inventory in downtrending items,” she said.

Gross margins also took a hit, declining 2.3 percentage points to a rate of 40.8 percent and driven by lower full-price selling due to higher promotions, Gap said. The operating margin rate in the quarter was 12.8 percent.

In addition, the company doubled its quarterly dividend to 4.5 cents per share.