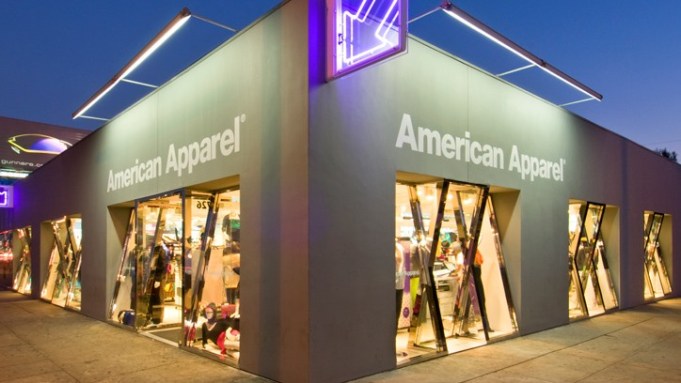 American Apparel Inc.’s future might be on the line, but chief executive officer Dov Charney is still selling.

The cash-squeezed retailer said Tuesday that it might not be able to continue as a going concern and that, without a concession from its lender, the company would likely trip a financial covenant next month, causing a potential cascade of debt repayments.

“Public companies have to make people aware of possible risk factors,” said a very animated Charney when WWD caught up with him in Las Vegas as he made the rounds of the trade shows.

But the ceo expressed confidence American Apparel would live on.

“The capital structure issues will work themselves out,” he said. “I need to focus on realigning the company and bringing it back to profitability.”

That will take between six and 15 months, predicted Charney, who owns 45 percent of the company’s stock, inclusive of warrants.

Charney traced most of the current problems back to difficulties at the firm’s Los Angeles factory, which hired 1,600 new workers in the second quarter. Last year, American Apparel dismissed workers who could not prove to federal authorities that they had the legal right to work in the U.S.

“Replacing the workers that we lost in [our] L.A. factory was far more difficult than I anticipated,” he said. “In addition, because the consumer is battered, having the right product at the right time at the right place is more important than ever. But we could not respond quickly enough because of our issues with the factory.”

Charney said he wants to cut costs at the factory, increase its speed to market, enhance the in-store experience and get the word out that American Apparel now has more sophisticated product and is evolving as a brand.

Despite the ceo’s optimism, the future of the firm he founded remains murky — and was made even more so by American Apparel’s statement Tuesday.

The company’s debt load ballooned by $28.9 million to $120.3 million over the course of the second quarter ended June 30. And it expects operating losses of $5 million to $7 million during the quarter. First-half losses were described by the firm as “substantial.”

“Based on this, and trends occurring in the company’s business after the second quarter and projected for the remainder of 2010, the company may not have sufficient liquidity necessary to sustain operations for the next 12 months,” the company said.

Shares of American Apparel plummeted 25.9 percent to $1.03. That was a financial hit for Ronald Burkle of The Yucaipa Cos. LLC, which last month acquired 4.3 million shares, or 6 percent of the company, for $5.9 million. That stake is now worth $4.4 million at Tuesday’s close — meaning Burkle has lost $1.5 million on his investment in fewer than 30 days.

The company’s future could hinge on a concession from its lender, Lion Capital (Americas) Inc.

American Apparel said it was “probable” that it would not meet the requirements of its minimum consolidated EBITDA covenant by Sept. 30. In June, Lion amended its credit agreement with the firm for a third time, adjusting the covenant and extracting an even higher interest payment in the process.

If the firm breaks the covenant, the retailer could default on its revolving credit facility and be blocked from borrowing under the agreement. All of the firm’s debt under the revolving credit facility and its second lien agreement could be declared immediately due and payable. That could be Burkle’s strategy — waiting for the retailer to default on the loans, which might allow him to pick up American Apparel’s assets on the cheap.

As for the future structure of the retailer, which has 279 stores, if it does pull through, it will be a smaller company, said Sherif Mityas, a partner in A.T. Kearney’s retail consulting practice.

“They got a little bit too far in front of themselves from a growth perspective and got too much ahead of themselves with debt, given their cash flow,” Mityas said.

“It was a positive and a negative,” Mityas said. “They became who they were because they were focused, because they wanted to be this different type of brand, focused on the leading-edge, almost cutting-edge consumer. Those consumers are very finicky and not brand loyal.”

The raffish Charney, who has stirred controversy in the industry with allegations of sexual harassment, outré ad campaigns and outrageous statements, appeared to run American Apparel as a perennial start-up. Along with that came a lack of operational discipline that has hurt the company.

“Any one of these issues is a challenge,” Johnson said. “The combination of two or more can be fatal. Lenders ready to pull the plug is not a cause of the problem, but a result.”

Last month, auditor Deloitte & Touche resigned and said the firm had not maintained effective internal control over its financial reporting. Deloitte is looking for additional information to reevaluate 2009 results.

“It’s clear that [Charney] was trying to pull every lever to keep the thing afloat,” said Nancy Koehn, a retail historian at the Harvard Business School.

From the beginning, Charney swam against the fashion mainstream, producing brightly colored basics in the U.S. and targeting the product at a narrow swath of hipsters.

“It’s very much a kind of rule-breaking story that has its own kind of social integrity to it, and I think it served the company very well through much of its history,” said Koehn.

Koehn said Charney was known as “a bit of a one-man band” and might have found it difficult to delegate as the operation expanded and the consumers shifted in the wake of the downturn.

“He may have been so busy hustling to keep liquidity together…that he took his eye off the rapid changes in his consumer,” she said. “American Apparel has always been a little bit of a value-added brand in the teenage space, so it’s played that game. But it’s under a new kind of onus. The retailer is under a burden to justify the premium that they’re asking. I don’t think American Apparel has probably done a vigorous enough job of that. Consumers are taking back the financial night for themselves and saying, ‘What exactly am I paying for? Why is it worth it?’ ”

Whatever internal problems American Apparel is facing, it is also contending with a dramatically shifting retail landscape.

“Spending on apparel isn’t increasing, and so it’s forcing the players in the market to wage a market-share war,” said John Long, retail strategist at Kurt Salmon Associates.

“We don’t expect the teen pie to be growing,” he said. “What we see is that stores other than the specialty apparel stores — department stores, even the mass merchants — are targeting the teen customer as an opportunity. The competition is going to result in consolidations [and] store closings.”