The retailer adapts amid the coronavirus, more than two months of national lockdown and racial tensions escalating throughout the country.

“Last year, we had to work our way through the tariffs. The year before, we had to work our way through the border tax. The coronavirus was ahead of us in March and all of a sudden, then last week, we had, unfortunately, what the country is going through right now,” Jay Schottenstein, executive chairman of the board and chief executive officer of American Eagle Outfitters, told analysts on the company’s Wednesday morning conference call. “Hopefully, things will get back to normal — whatever the new normal is.”

The retailer, which includes the American Eagle and Aerie brands, closed all of its stores mid-March to prevent the spread of the novel virus, which was rapidly making its way around the globe. As of Wednesday, 556 of the 1,093 American Eagle Outfitters stores have reopened. (Executives on the conference call said roughly 77 more stores would be open by Thursday.)

Unsurprisingly, the massive store closures cut into both sales and profits. But just when the company thought it was getting the hang of the new normal — digital demand surged 33 percent during the quarter ending May 2, as consumers hunkered down at home — the world was thrown another curve ball.

George Floyd’s death has led to days of cross-country protests. Well-intended events were beset by looting in big cities around the nation. Some retailers were swift, boarding up storefronts before would-be looters arrived. Others weren’t so lucky. 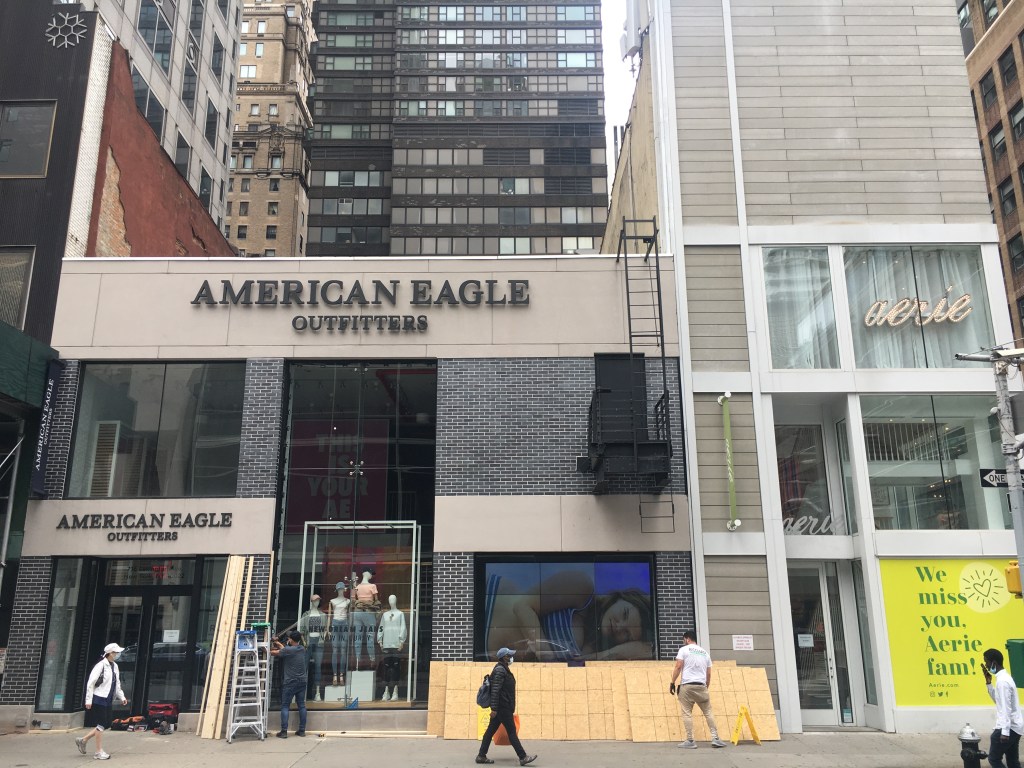 For Aerie, a brand that was founded on diversity — it was one of the first fashion brands to use models of various shapes, sizes and physical characteristics back in 2014, before it was trendy to skip the airbrushing — the path forward then will likely include a renewed focus on diversity, one that centers not only attracting and engaging minority shoppers, but also on employing them.

“Our Aerie community is the heartbeat of our brand,” said Jennifer Foyle, Aerie global brand president. “The unique voices, experiences and talents of our associates and customers is what drives us to deliver a lifestyle that feels good from the inside out. Aerie continues to outpace competitors and gain market share because of our unmatched product assortment and our consistent brand messaging of positivity and acceptance. Now, more than ever, we need to be a powerful voice for our community—helping to create change and speaking out against racial injustice. We stand in solidarity with the Black community. We’re listening, we’re learning and we’re here to empower real women everywhere.”

In addition, Foyle said on the conference call that consumer staples consumer staples — things like leggings, bralettes and even swimwear — helped Aerie’s digital sales jump 75 percent during the quarter. Digital demand at the innerwear brand is up more than 100 percent quarter-to-date, compared with a year earlier.

“Aerie’s performance was nothing short of spectacular,” Schottenstein said. “Despite having stores closed for almost seven weeks, Aerie experienced a double-digit demand increase for their total business. More consumers are looking for exactly what Aerie is, a unique brand platform of positivity and acceptance.”

The company still plans on opening about 25 new Aerie stores this year, even as other retailers close up shop permanently. And Foyle said her team is working on delivering newness to the brand, with a back-to-school line set to drop July 14.

“Coming out of this COVID-19, there are so many learnings that have made us smarter, wiser and more cost-efficient,” Foyle said on the conference call. “We just have so many great ideas and this team is not slowing down.”

Meanwhile, investors seem pleased. The stock closed up 14.7 percent to $11.80 a share Wednesday.

“We continue to favor the U.S.-focused retailer in the long run given the relative strength of the U.S. consumer and gas prices and pent-up demand as likely to boost [the] back half demand in apparel retail,” Jen Redding, analyst at Wedbush, wrote in a note. Her firm rated the company’s stock “outperform” and set a price target between $10 and $12.

“This digital acceleration is something you can’t ignore,” he said on the conference call. “And it’s also been very encouraging to see our digital channel remain strong even after stores have opened.”

Store sales volumes in May — across all markets that have reopened — were about 95 percent of what they were a year earlier, Mathias said.

“We are selling down inventory and there was a lot of stimulus; there was pent-up demand. We had competitors closed,” Mathias said. “So there are reasons why [our stores] opened strong. But clearly, we’re the strongest store in the mall and our customers are continuing to come to us. We think we are getting more than our fair share of pent-up demand.”

Moving forward, even with the addition of the new Aerie locations, Mathias said the retailer’s store fleet will likely be smaller. The leases that do renew will likely have more favorable lease terms, Mathias added. At the end of last quarter, the average lease term was fewer than four years and about half the leases are set to expire by the end of 2021. Executives on the conference call said the company did not pay the majority of its cash rents in April with stores closed.

“It’s been a tough couple of months for the country. And I mean, as Americans, we’re not used to being quarantined,” Schottenstein said. “Americans like to move around; we like to be free. Hopefully, everybody trying to overcome in this country will come together and do the right thing.”