An Upbeat ‘Display’ by the Industry

Those suppliers of mannequins, forms, fixtures, decoratives and lighting - a shrinking but still important community to retailers - put their best face... 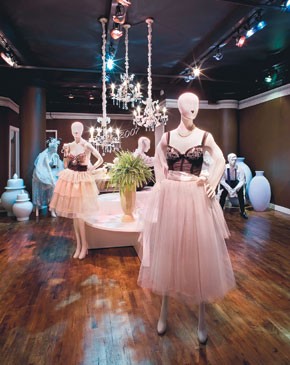 Those suppliers of mannequins, forms, fixtures, decoratives and lighting — a shrinking but still important community to retailers — put their best face forward for last week’s market.

“This was a condensed market. It was focused and edited, and that’s a good thing,” observed Bill Herbst, Saks Fifth Avenue’s senior vice president of construction planning, design and visual.

“We were impressed by the continued mix of fashion and interior design trends which were evident in both mannequin and fixtures this year,” said Scott Devine, Lord & Taylor’s vice president of visual merchandising.

These suppliers have been pounded by retailers and their mergers, but for the Dec. 5 to 7 market, they orchestrated some consolidating of their own. Past market weeks were organized by industry trade publications and included vendors exhibiting in New York’s Jacob K. Javits Convention Center and vendors with permanent showrooms in the city’s Chelsea neighborhood, where the visual merchandise and display industry is concentrated. But last week’s market was organized by the National Association of Display Industries, known as NADI, and limited to showrooms only. The result: an easier-to-navigate market, a higher quality assemblage of vendors and strong attendance by retailers around the world, including Apple, Nordstrom, Target, Woolworths of South Africa, Macy’s and Kohl’s.

“It was time to take control of our own destiny,” explained Karen Schaffner, events director, NADI. “We wanted the niche to be high-end and very design-oriented.”

The mood was further lifted by a party sponsored by the Planning and Visual Education Partnership held at the Mandarin Hotel to raise scholarships for students and recognize rising stars in the store design and visual arena. There was also a party Friday night at the Empire Hotel, organized by Look, Rootstein and Goldsmith.

With retailers apparently demonstrating renewed interest in enhancing their presentations, the suppliers are now hoping for a healthy round of orders early next year. According to Schaffner, they’ve worked hard enough to deserve it. At the 22 showrooms participating, compared with last year’s 16, “It seemed almost everyone had redone their showrooms with new presentations. Everything was very light and elegant,” she said.

“It was all about new texture and finishes,” Herbst added. “All the vendors want to adapt and will customize pieces for us. Now with consolidations, we really don’t want to look the same.”

“It felt like the old days,” said James Maharg, chief executive officer of Look, at 601 West 26th Street, describing the traffic to the showrooms. “I was hearing the word ‘display’ more and more. Stores have realized the need to get the magic of display back.”

“The industry is going through a lot of consolidation, but there was a strong turnout of stores from the U.S., Europe and Canada,” noted Ralph Pucci of Ralph Pucci International, 44 West 18th Street, an eclectic showroom of mannequins, home furnishings, photography and illustration.

Pucci featured its new Sport mannequins inspired by Bruce Weber and Herb Ritts photographs and geared for men’s activewear and casual sportswear. The collection has a black foundry finish with the appearance of slate, and the showroom was treated as an art installation, juxtaposed with graphics.

Sal Lenzo, vice president of creative marketing and sales at Lifestyle, said there was a turnout of 150 to 200 people representing 60 or 70 stores in his showroom at 151 West 25th Street. Lifestyle showed two new women’s mannequin series called Deco, for designer sportswear, and the more sculpted and sassier Chelsea collection of mannequins for sportswear. Lifestyle also has developed children’s wear mannequins called Recess.

“One big trend was how the materials reflected an environmental consciousness, but they were dressed up and lacquered so the sophistication of the pieces still showed through,” said Christine Nakaoka, principal of the Nakaoka Roberts interior design firm for high-end retail space.

Among her favorites of the NADI show week, Nakaoka cited the floorings and wall systems from Architectural Systems and Rootstein’s ethereal mannequins.