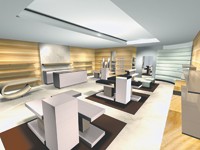 NEW YORK — Since Jones Apparel Group bought Anne Klein in 2003, it has been quietly formulating a strategy of growth for the label. In the fall, Anne Klein will celebrate its arrival in multiple ways, including a retail rollout of accessories-only stores, two major stores that also will feature apparel, a renewed focus on handbags and a new fall ad campaign.

In August, the company will kick off a retail strategy, which includes opening nine Anne Klein New York stores between August and October, with plans to add 10 to 15 units annually over the next few years. The freestanding stores mostly will focus on accessories, which Jones Apparel executives expect will fuel the future growth of the brand, which at one time was considered among the most significant in American sportswear.

“For the past two years, we have worked very closely on redefining what the brand sensibility should be, and came up with a great format that really defines what Anne Klein is,” said Stacy Lastrina, Jones Apparel’s executive vice president for marketing and creative services. “We have a proper accessories following, and the idea to take that to the next level is a logical step. We believe the brand has much growth ahead of it.”

Anne Klein is reentering the retail scene after a SoHo boutique here, which opened in 2002, was shut down two years later amid overall challenges in the bridge sector, a tough downtown retail environment after Sept. 11 and a brand that was in flux after Jones Apparel’s acquisition.

The first new Anne Klein New York accessories-only store is set to open at Century City in Los Angeles in August. This will be the first time all the brand’s accessories categories will be housed under one roof, since department stores that carry the line typically merchandise it by classifications.

“This customer shops head to toe, so this is to give her an environment where she can see all the categories together,” explained Eileen McMaster, vice president of corporate communications. “Accessories have always been an important element with Anne Klein, and the store gives you the feeling of almost walking into her brand.” The new store concept features ash wood wall coverings, smoked glass shelving and brushed metal cases, travertine marble floors, plush brown carpeting and a carved gold lead table as a focal visual. The store layout resembles a series of smaller rooms, with little corners that company executives call “husband seating areas.” Handbags represent 50 percent of the store’s offering, with the rest including sunglasses, belts, watches and shoes, as well as small gift items such as candles, note cards and an Assouline book. With the opening of the stores in the fall, the Jones Apparel division also will be introducing Anne Klein New York jewelry.

The Century City opening will be followed in early September with a unit at 655 Madison Avenue here, in the space formerly occupied by Boyd’s Pharmacy. Fall also will see Anne Klein New York boutiques at Copley Plaza in Boston; at the San Francisco Center in San Francisco; on Greenwich Avenue in Greenwich, Conn.; at Somerset Collection in Troy, Mich.; on El Passé Drive in Palm Desert, Calif.; at Green Hills Mall in Nashville, Tenn., and at Plaza Frontenac in St. Louis.

“They’re all premier locations with a [tenant base] that lends itself to this kind of product,” Heather Pech, chief executive officer of company-owned retail at Jones Apparel Group, said. “It’s our entrance into the luxury arena in our retail portfolio at Jones.”

Each store will be about 1,600 square feet in size. The Madison Avenue and El Passé Drive units will be larger at 2,500 and 2,400 square feet, respectively, because they will carry Anne Klein New York apparel in addition to accessories. Pech added there are plans to open a second Manhattan boutique in a downtown location next year.

“Retail enhances everything we do for a brand,” she said, indicating that the store blueprint could eventually also translate into shop-in-shops at department stores.

Accessories will account for much of the growth at Anne Klein, which has a wholesale sales volume of $550 million, including licenses. To better serve the expansion, the company hired Dominique Aurientis as creative director of the handbags collection. The French designer once had her own accessories collections, and in the past has developed accessories for the likes of Christian Dior, Lanvin, Nina Ricci, Celine, Salvatore Ferragamo and Emilio Pucci. Since arriving in New York earlier this year, Aurientis has been busy combing the Anne Klein archives for inspiration, and the first fruits of her efforts include a collection of handbags featuring an eye-catching link hardware detail with Anne Klein’s own signature engraved across its front. The handbags, which retail on average from $395 to $595, will be exclusive to the Anne Klein boutiques for the freestanding retail launch.

“My challenge is to bring the French point of view to an American brand, and combine it with the history of Anne Klein,” Aurientis said. “For me, Anne Klein represents the American version of couture. Here, you have a more relaxed attitude. The women are dressy and like to be elegant, but it’s simpler. I would like to create a lifestyle, a universe.”

This fall, the company will highlight the new accessories, including the handbags designed by Aurientis, in an ad campaign that will run in issues of Vogue, Harper’s Bazaar, Town & Country, Vanity Fair, Elle, Time Style & Design, T Style Magazine, British Vogue and Italian Vogue. The campaign was photographed by Patrick Demarchelier at the New York Public Library and features Carolyn Murphy, who became the face of Anne Klein in the spring.