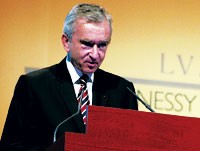 PARIS — The gloves are off — again.

While reporting that first-half net profits at LVMH Moët Hennessy Louis Vuitton soared 49 percent to 396 million euros, or $485.9 million at current exchange, chairman Bernard Arnault took some fresh pot shots at an old rival, saying he harbors no regrets about losing Gucci in a “Looking back, we were fairly fortunate in missing that deal,” Arnault said at an analysts’ meeting here Wednesday in an auditorium at LVMH’s new headquarters. “Of course, we might have proceeded differently [at Gucci]….But now they have unknown designers and inexperienced management. We’ll have to see. It’ll be interesting to watch.”

Evoking gasps and some hearty chuckles, Arnault’s no-confidence vote referred to the appointment of Tom Ford’s underlings to design Gucci and Yves Saint Laurent and to new recruit Robert Polet, formerly head of frozen foods at Unilever, who in July became chief executive of Gucci Group. Polet replaced Domenico De Sole, with whom Arnault had a long-running verbal battle in the fight for control of Gucci that LVMH began in 1999.

Asked for a reaction to Arnault’s comments, a spokesman for PPR retorted, “The Gucci brand is in excellent shape and we understand Mr. Arnault’s frustration — even when expressed by denigrating his competitors.”

LVMH’s results compare with net profits of 265 million euros, or $292.7 million, in the corresponding period a year earlier. Operating income increased 14 percent to 996 million euros, or $1.22 billion, versus 874 million, or $965.4 million in the year-earlier period. Euros have been converted to dollars at average exchange rates for the corresponding periods. At constant exchange, the increase stood at 30 percent.

Sales in the first half, excluding the impact of currency exchange and changes in perimeter, advanced 8 percent to 5.68 billion euros, or $6.97 billion.

Arnault said July and August showed a similar “double-digit” sales trend to that of the first half. Goldman Sachs analyst Jacques-Franck Dossin calculated that amounts to an acceleration in like-for-like sales growth of at least 5 percentage points.

Meanwhile, Arnault reiterated LVMH’s objective of a “significant” increase in operating income for the year.

But his tone was upbeat, and he sought to distance LVMH from its competitors and general trends in the luxury sector.

“The second half is looking very good for the group as a whole,” he said. “The world is being driven by economic growth, even if we are not feeling it so much in Europe.”

Furthermore, he boasted: “There are major differences from one company to another and LVMH is hardly comparable because, in terms of profitability, it does much better than its competitors year upon year.”

Unfavorable currency exchange shaved 170 million euros, or $208.6 million, from first-half profits, hitting its core fashion and leather goods division hardest. Operating income in those businesses stood flat at 634 million euros, or $777.9 million, which disappointed some analysts, even if the overall results were above consensus.

Arnault acknowledged that continued investments in Fendi and Donna Karan affected the results. He declined to give specifics, but noted, “Rest assured, we are not losing 50 percent of the turnover.”

Pressed for more information about those brands during a question-and-answer period, he offered only: “The figures will be improving as of 2005.”

The “G” word came up while Arnault was trumpeting a dramatic turnaround in fortunes at DFS, driven by a sharp rebound in Asian tourism. That helped operating profits in its selective retail division zoom to 76 million euros, or $93.3 million at average exchange rates, in the six months ended June 30, versus a loss of 15 million euros, or $16.6 million, a year ago.

Arnault said the results suggest the 1996 investment in DFS — purchased for a fraction of the selling price of Gucci —was a sound one, as the duty-free retailer should soon throw off as much profit as Gucci.

Still, Arnault, who has described DFS as “noncore” in the past, stopped short of saying a disposal of the retailer was imminent. “We will wait for the performance to improve greatly before exchanging diamonds for our gold,” he quipped with a sly grin.

The company also highlighted fast growth at Celine, Pucci, Berluti and Marc Jacobs, and said the negative currency impact would be lower in the second half.

Meanwhile, the loss-making watches and jewelry business edged out of the red ahead of schedule, posting 2 million euros, or $2.5 million, in operating profits, versus a loss of 38 million euros, or $42 million, a year ago. LVMH attributed the improvement not only to the shedding of unprofitable brands such as Ebel, but to improved lead times and new accessibly priced ranges at TAG Heuer and Chaumet.

In perfumes and cosmetics, operating profits advanced 7.7 percent to 42 million euros, or $51.5 million, versus 39 million euros, or $43.1 million, a year ago. Arnault said sales for Pure Poison by Dior are already ahead of forecast and would help drive sales in the second half, along with products from Guerlain and Givenchy.

China was also a recurring subject on Wednesday, described by LVMH as a “high-potential” market with a colossal youth population. Arnault said China could become luxury’s new Eldorado within a generation.

Louis Vuitton president Yves Carcelle noted that the brand today christens its first global store in China selling all product categories — a unit in Shanghai triple the size of the previous location.

“It’s a significant market for us,” Carcelle said. He also noted that Chinese tourists spend almost double the amount on luxury goods when they travel as they do in their home country, and as many as 49 million are expected to go abroad by 2008.

Also, in one of many compliments to Vuitton creative director Marc Jacobs, Carcelle noted that sales of the brand’s ready-to-wear doubled in August versus a year ago, due to the strength of the collection and timely deliveries.