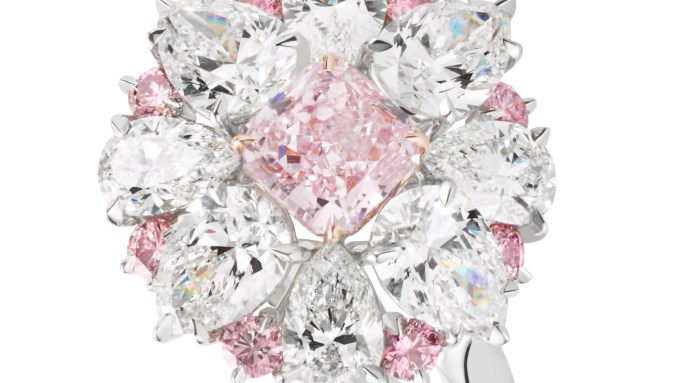 LONDON — British jeweler Asprey is streamlining its strategy to focus on high-end watches and jewelry once again, and has begun to see the benefits.

John Rigas, Asprey’s chairman and shareholder of reference, told WWD in an interview that Asprey has a very specific positioning, and isn’t out to compete with Europe’s fashion and luxury brands.

“Right now, it’s all about colored diamonds, and we are positioned very well in that respect,” he said.

Over the past year, since the departure of managing director Paddy Byng, the shift has been to colored diamonds worth upward of a million pounds, high-end watch distribution deals, and other big-ticket items.

The brand has undertaken new, international partnerships as the exclusive dealer of brands including Rolex, Bovet 1822 and Dimier, which will also make a new line of Asprey-branded watches that is set to launch.

The new collection, which Rigas said is ready to ship, features watches in gold, rose gold and platinum, with a midprice point of $35,000.

In addition, Rigas pointed out that the market for 2,500 pound, or $3,570, ladies’ handbags — the higher-end of the fashion and luxury brands’ ranges — remained “crowded.”

He added that the brand does better selling fewer very high-end bags with price tags in the range of 120,000 pounds, or $170,000, at average exchange.

Asprey continues to build its silver, crystal and china business with branded spaces at Harrods and Bergdorf Goodman.

In addition to the Bond Street flagship, the brand has stores in St. Moritz and Madison Avenue; two units in Japan, and shops-in-shop at the Beverly Hills Hotel and the Setai South Beach, Miami.

Under Byng, the brand had pushed more accessibly priced jewelry and leather goods, bringing in designers Shaun Leane and Katie Hillier in a bid to attract a wider and younger audience. Byng had also broadened the brand’s gift and leather-goods offerings.

Rigas’ latest strategy signals a return to the early days of his ownership of the brand, when Asprey cultivated a narrow segment of deep-pocketed clients. Rigas’ Sciens Capital Management purchased the brand with Plainfield Asset Management in 2006. He bought the ailing brand — which started life in the 18th century as a luxury emporium, and later began selling jewelry to the world’s richest families — from Lawrence Stroll, Silas Chou and Edgar Bronfman Jr.

The previous owners had overstretched the product offer into ready-to-wear, rolled out stores worldwide, and incurred enormous costs in one of luxury’s most dramatic tales of a revival gone wrong.

It remains to be seen whether the latest incarnation of Asprey, as a brand catering to the tastes of a fraction of the world’s richest one percent, will flourish, given the strategic about-turns over the years.

The early signs are promising: In the month of December, retail sales were up by 158 percent compared with last year, while the London flagship on Bond Street saw a sales increase of 176 percent, according to the company.

Asprey said that the current fiscal year, which began April 1, 2015, has so far been strong, with the retail channel increasing by 102 percent ahead of last year. At the London flagship, retail sales are up 108 percent up versus last year.

Turnover dipped 6.8 percent to 14.4 million pounds, or $23.2 million, due to a one-off financial transaction in the previous fiscal year.

Rigas told WWD the company was “very close” to profitability.

In the Christmas trading statement update, the company said it was seeing a “continuing improvement in gross margin towards profitability” and “continuous significant investment from Asprey shareholders in support of the company’s expansion and growth.”