With no viable backers stepping forward to rescue their firm, designers Mark Badgley and James Mischka said they will not produce a spring line. 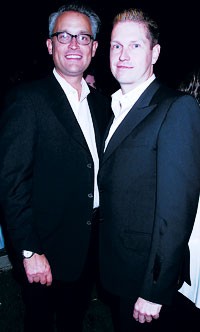 NEW YORK — With no viable backers stepping forward to rescue Badgley Mischka, the designers Mark Badgley and James Mischka said Monday they will not produce a spring collection.

Badgley Mischka has been majority owned by Escada (USA) Inc. since 1992, but the designer eveningwear brand was put on the block last October as part of Escada’s ongoing global restructuring. Although a number of companies have held discussions with the designers and Escada executives over the last several months, they jointly said in a statement on Monday that “an agreement has not been finalized thus far and funding is therefore not available for a spring-summer collection.”

That Badgley Mischka — one of the star labels of the New York fashion scene — could not attract another backer in that time has confounded many of the executives involved in its sale, considering the consistently strong showings by the designers in editorial reviews and in celebrity press clippings. But the high cost of producing the designers’ elaborately embroidered and beaded evening gowns and promoting a designer evening collection that is not yet supported by a high-volume licensing business has been cited as a factor in their lack of aggressive suitors.

The designers allocate a budget in the neighborhood of $500,000 to produce their seasonal runway shows, which Escada was no longer willing to support in the face of its own cost-cutting measures.

Badgley and Mischka, both 43, were not available for comment on Monday, and officials at Escada, which owns an estimated 80 percent of the business, deferred questions beyond the designers’ statement for the time being. The design duo, who are co-presidents of B.E.M. Enterprise Ltd., will continue to seek a new financial partner for the company.

Badgley Mischka, with annual retail sales estimated around $40 million, is expected to continue with the production and deliveries of its fall collection, and will support sales with personal appearances and public relations, according to the statement. However, several positions are expected to be eliminated at the company, which has a staff of more than 60 at its offices at 525 Seventh Avenue, and additional cost-cutting measures will be taken in its operations as the division winds down.

Plagued by declining sales and disjointed product that followed an expensive attempt to modernize the company’s image three years ago with a new designer and a global store overhaul, Escada AG, based in Aschheim, Germany, announced last year it would restructure again to focus on the development of its core Escada labels and divest its other brands, which include its holdings in Badgley Mischka, as well as European labels Louis Féraud and Apriori.

Since 2001, Escada has cut about 20 percent of its global staff and has continued with massive cost-cutting this year, while striving to boost sales with new licenses and restyled collections. Its efforts resulted in some positive news, in that its most recent quarterly report showed an after-tax profit of about $123,000, compared with a $5 million loss the previous year.

Badgley Mischka became a part of the Escada picture during a much different time for the company. During the height of the appeal to affluent women of brightly colored suits with angular shoulders, Badgley Mischka represented a sophisticated counterpoint for evening to Escada’s look for day.

Badgley and Mischka, natives of Illinois and Wisconsin, respectively, met as students at Parsons School of Design in New York and started their joint label in 1988 after Badgley had worked for Jackie Rogers and Donna Karan, and Mischka for WilliWear. They initially financed their own collection with money from their families, but sold a majority interest to Escada USA in 1992.

Although their collections often harken back to a more sophisticated era of eveningwear, the gentlemanly designers have maintained a modern celebrity following that has ranged from memorable red-carpet plugs by Winona Ryder, Sharon Stone and Teri Hatcher in their early days to more recent appearances on “Sex and the City,” which featured the marriage of one character in a Badgley Mischka gown. They also scored Beyoncé as a front-row guest at their February show, even if she generated more press by being tardy and holding up the start.

Although the 16-year-old label has not reached the point that it has shown a profit, its potential in licensing has only recently been tapped, with a new fur collection with BC International and possible deals for lingerie, footwear and eyewear. Last month the duo said they were in talks with a fragrance company about launching their first women’s scent.

The company opened its first store on Rodeo Drive in Los Angeles in 2000, and more recently has continued to expand with a separates group launched for Saks Fifth Avenue and special-order businesses.