Tailored Brands and Le Tote with Lord & Taylor join the list of firms tripped up by dealmaking and now in Chapter 11.

By Evan Clark
with contributions from Jean E. Palmieri
on August 4, 2020

If it’s Day One for Amazon, as Jeff Bezos likes to say to underscore the potency of start-up culture, it’s first-day motions in bankruptcy court for an ever-growing list of acquisition-happy retailers.

Men’s Wearhouse parent Tailored Brands Inc. and Lord & Taylor-owner Le Tote were just the latest in a long line of retailers when they filed for bankruptcy protection late Sunday, putting them in front of bankruptcy judges on Monday to start the Chapter 11 process.

Tailored Brands is looking for a reorganization, Le Tote and its Lord & Taylor unit are hoping for going-concern sales while readying for liquidation. Both companies were felled ultimately by the coronavirus, which closed stores and reordered shopping habits as so many millions of workers stayed home to social distance.

But they also played in the tricky spaces — with high-profile wheeling and dealing only making their positions trickier. Tailored Brands, which bought Jos. A. Bank for $1.8 billion in 2014, grabbed a bigger portion of the buttoned-up market in an ever more casual world. And Le Tote took on department store retailing extremely late in the game with its $75 million acquisition of Lord & Taylor last year.

Tailored Brands and Le Tote were shaped by acquisitions that ultimately left them too indebted to withstand the first rush of COVID-19, when retailers hoping to transform their way through an already rocky consumer world found they had little money coming in, rent due and interest payments looming.

The story is the same at the now-bankrupt Neiman Marcus Group, J. Crew Group and John Varvatos, all of which were the product of private equity buyouts, and the acquisition-prone Ascena Retail Group, which operated Ann Taylor, Lane Bryant and more, and Centric Brands, which was formed when Differential Brands bought a significant portion of Global Brands Group’s North American business. (The stress of COVID-19 has also taken down many others, including Brooks Brothers, Retailwinds, Stage Stores Lucky Brand and True Religion).

“There are a lot of things distracting companies from being great retailers,” said consultant Greg Portell, global head of Kearney’s consumer practice. “That could be [mergers and acquisitions], it could be financial creativity….No one is sitting there thinking, ‘How can I make the consumer retail experience today?’ These companies aren’t loading up on debt because they got a great e-commerce system or great logistics software or built a great web site. They loaded up on debt because they wanted to create [financial] leverage. The consumer neglect in some of these bankruptcies is telling. We had investors that were focused on financial gamesmanship rather than retailers that were focused on consumers.”

In contrast, Amazon, which posted a $5.2 billion profit last quarter, has gained market share in fashion and other sectors largely by pumping up its main service and pushing its operations, suppliers and employees — some argue too hard — to give consumers more, better, faster.

But there is some hope for the rest of retail even at this turbulent time.

“We are in the midst of a retail forest fire,” Portell said. “And forest fires are incredibly devastating, but they’re necessary to create new growth.”

That puts the crushing spate of bankruptcies in a broader life cycle of renewal, even if more companies find themselves headed to court after what could be a tough holiday season after a horrible year.

“Those that don’t have the right model are failing,” said Brien Rowe, who focuses on the consumer space and is managing director of the investment banking group at D.A. Davidson. “They’re either reorganizing or they’re going to liquidate and go away. What emerges or remains will be a much healthier retail environment.”

Rowe said the pandemic has magnified shifts that were already under way.

“If you look at Brooks Brothers, look at Lord & Taylor, these are iconic brands and retailers,” he said. “Their core customer was from a different time. A time when we dressed more formally and when we shopped exclusively in brick-and-mortar.”

And now times are changing even faster.

“Even if we were all back at work today, the casual Friday that has become the casual week, I don’t know that’s going to change,” Rowe said. “That business model is permanently impaired.”

Even so, Tailored Brands is pushing on and sees a niche. The company went to court with commitments for $500 million in debtor-in-possession financing from its existing revolving credit facility lenders and a prearranged financial restructuring plan that is expected to reduce its $1.4 billion debt by at least $630 million.

Dinesh Lathi, president and chief executive officer, argued the company was changing to meet the market when COVID-19 hit and acknowledged that more change was needed. (The company last month said it would close up to 500 of its 1,400 stores and cut 20 percent of its workforce).

“As evidenced by the positive results we saw in January and February, we have made significant progress in refining our assortments, strengthening our omnichannel offering and evolving our marketing channel and creative mix,” Lathi said. “However, the unprecedented impact of COVID-19 requires us to further adapt and evolve.”

Tailored Brands never seemed to stabilize after the deal to buy Jos. A. Bank, a back-and-forth takeover battle that left the company with a significant debt load and the project of trying to change the very promotional business, which went as far as to have a “buy one, get seven free” offer.

And that was just the latest bit of dealmaking. The company that became Tailored Brands bought K&G Men’s Superstore and Moores the Suit People in 1999, uniform company Twin Hill in 2002, dry cleaning chains in 2003 and 2004 and Joseph Abboud in 2013 (which was sold this year).

The firm’s insolvency marked a new, grim milestone for retail, which has been hit particularly hard by the COVID-19 shutdown.

That is the mark of life in a tough sector that simply became untenable. 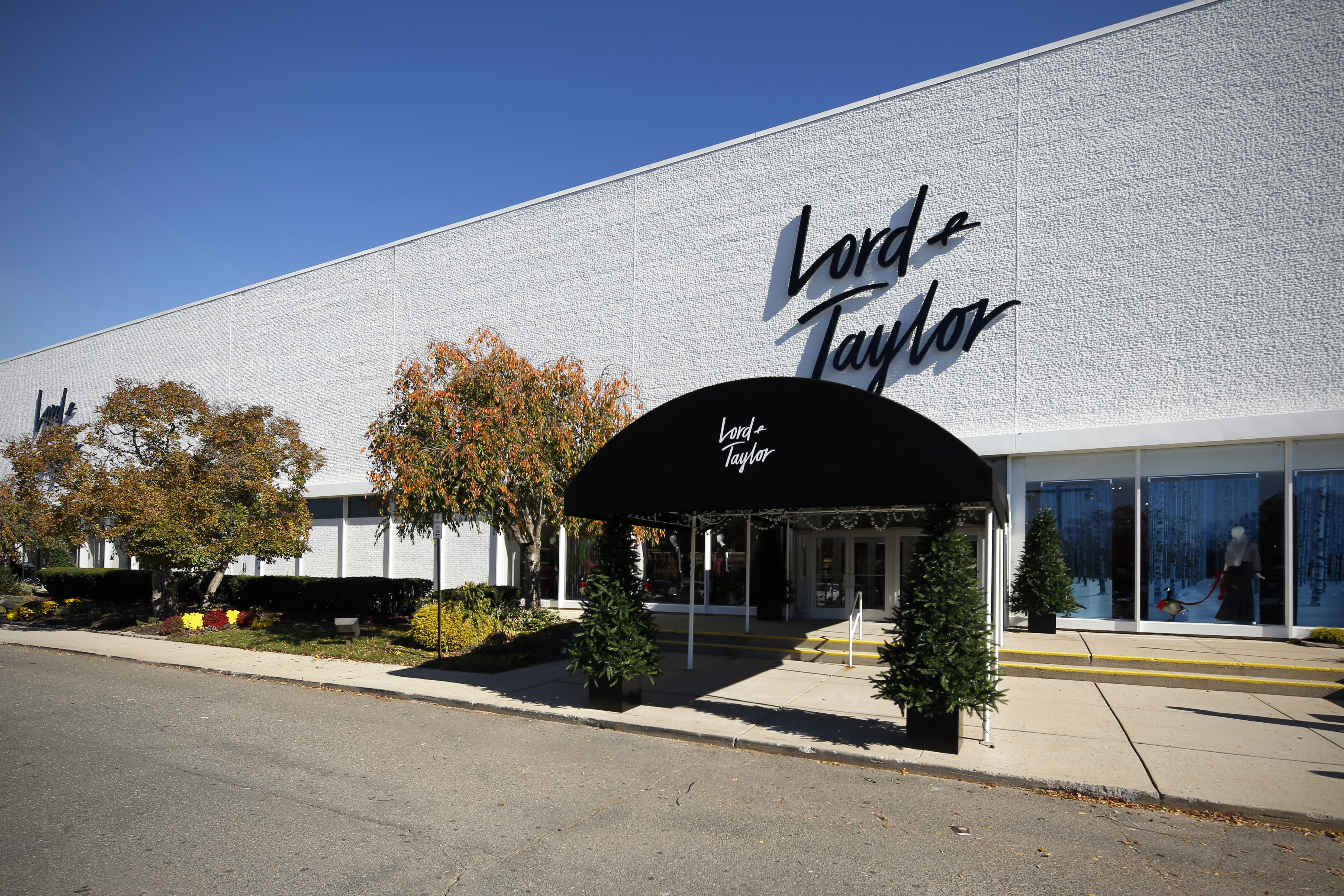 Outside the Lord & Taylor in Garden City, N.Y.  George Chinsee

Representing Le Tote in court, attorney Steven Serajeddini of Kirkland & Ellis said the firm “immediately stepped into the pressure of the current retail environment” when it bought Lord & Taylor as consumers migrated from brick-and-mortar to the web.

“At the same time, there was the tragic hammer of COVID-19, which immediately forced the company to close all 38 locations,” Serajeddini said.

The way out now is a “duel-track restructuring” process, he said. Le Tote has been given permission from its lenders to use cash collateral to operate while it pursues going concern sales for Lord & Taylor and Le Tote or liquidations. The plan submitted to the court envisions a sale of Le Tote by Oct. 5 and a sale of Lord & Taylor by Oct. 20.