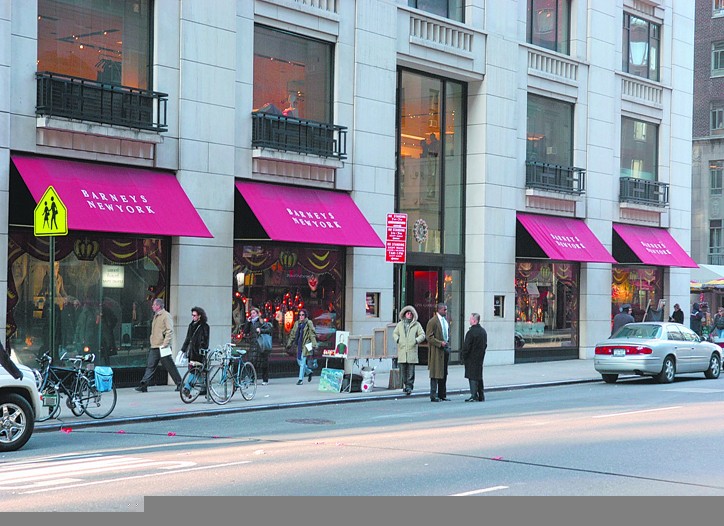 Barneys New York is hanging on.

As the retailer’s ultimate parent company, Dubai World, on Monday revealed a $10 billion lifeline from Abu Dhabi, speculation continues to swirl over Barneys’ future and whether it will be sold. While sources said a sale isn’t imminent, they’re not ruling it out down the road.

There have been signs of a pickup at Barneys, with business up 7 percent in October, although sales slid back into the negative column in November, approximately in the high teens. Factors and vendors continue to show support and ship with extended payment terms.

For now at least, all of this enables Barneys to put off a sale, a bankruptcy or some other restructuring, and hold off on announcing a strategy for the future until after the luxury chain digests its holiday business, according to sources. The state of limbo is heightened by the fact that Barneys has strangely operated without a chief executive officer since July 2008, and there is no one in line for the job.

And considering the high price Dubai World via its investment arm, Istithmar, paid for Barneys — more than $900 million in 2007 — and the woes permeating the luxury world, the retailer is likely to be a tough sale.

Also, Barneys units opened in Dallas, Boston, Las Vegas and Phoenix over the past three years have not gained traction, raising doubts about the portability of the brand and its stable of high-end, often esoteric designer labels, and any buyer faces the prospect of having to renegotiate leases, notably the 10-level, 235,000-square-foot Madison Avenue flagship. The lease on the flagship expires in 2019, but flagship rents are always negotiated years in advance to help plan the business. A year ago, ground level rents on Madison were about $1,000 a square foot. They’ve come down to about $750, and rents on higher floors get progressively cheaper.

Given these hurdles, Barneys, while definitely being examined by Dubai World for sale, isn’t high on the list of assets considering much of the emirate’s wealth is centered on financial services and real estate and could garner greater returns. Dubai shares control of the United Arab Emirates — a federation of seven city-states — with Abu Dhabi, although it is Abu Dhabi that has the oil wealth.

A banking source in Dubai said Istithmar is “considering various options,” including selling more of its trophy assets and also restructuring debt. He said Barneys, along with other international assets, would be a “likely contender,” but they have made clear they are looking at all possible options. Also, Dubai World sold two major West End properties in London to Great Portland Estates plc for 10 million pounds last month, far less than the 80 pounds that was paid for the two buildings two years earlier. Real estate sources in London say there are no forthcoming property sales that they know of by either Dubai World or Istithmar.

Dubai World has already said assets owned by Istithmar, and the profitable port operator DP World, would not be part of its planned $26 billion debt restructuring program, suggesting those assets are not for sale.

The global tightening of the credit markets has resulted in Dubai having national debt of $80 billion, according to “Sovereign Wealth Fund Investment Behavior,” a report by the Monitor Group and Fondazione Eni Enrico Mattei. The report said “Dubai restructured its sovereign wealth investment vehicles, bringing them under closer government scrutiny through the Advisory Council of the Government of Dubai,” and was looking to reallocate the debt burden across the “Dubai Inc.” network.

It is expected portions of the Abu Dhabi’s $10 billion bailout unveiled Monday will be used to pay the $3.52 billion in bond debt owed by developer and hotel operator Nakheel, Dubai World’s real estate subsidiary, that was due Monday, with the balance to shore up Dubai World’s balance sheet.

According to IHS Global Insight director Jan Randolph, the latest bailout by Abu Dhabi “follows two $5 billion Dubai government bond issues before the crisis broke that were quickly snapped up by the UAE Treasury, backed by Abu Dhabi. This latest payment will shore up the Dubai government’s finances, putting Dubai in a position to meet all its short-term liabilities for the next 12 months and avert a default.”

Randolph also noted, “The UAE’s bankruptcy laws may be tested for the first time by Dubai World should the restructuring of its assets proceed.”

Dubai World has interests in seaports, real estate, tourism, entertainment and retail, both in Dubai and internationally. Its trophy assets include ocean liner Queen Elizabeth 2 and stakes in HSBC, Deutsche Bank and Sony Corp.

U.S. assets owned by Istithmar include off-pricer Loehmann’s and the Mandarin Oriental hotel in New York as well as Barneys. Last week, Dubai lost the W Hotel in New York’s Union Square in an auction. The $115 million mortgage structured by Istithmar was transferred in September to a “special servicer” due to default concerns.

Istithmar is said to have invested $100 million into investment banking boutique Perella Weinberg in 2006, which was retained in August by Barneys to advise on options over the restructuring of its debt. In addition, Istithmar and Nakheel own a 20 percent stake in Montreal-based Cirque du Soleil.

A large portion of Barneys’ bank debt is held by two hedge funds — Ron Burkle’s Yucaipa Cos. and Perry Capital, headed by Richard Perry. Yucaipa bought the debt from Citibank. Sources familiar with Yucaipa’s operations said on Friday there is no particular strategy in place for Barneys, contrary to published reports that it and Perry Capital, the other large Barneys bondholder, may be pushing for control of the company.

Factors said Monday that Barneys has been paying its bills, and that they are approving orders for the retailer.

Other financial sources said whatever course of action Istithmar takes will largely depend on the final tally of receipts from the holiday sales season.

While Richard Baker, chairman of HBTC, which operates The Bay, Zellers and Lord & Taylor, may have met with Barneys creditors, he’s busy upgrading and consolidating his retail chains. Barneys would not be a strategic fit considering the moderate image of HBTC overall. Baker is also reportedly more cautious after his buying spree, which included the ill-fated Fortunoff chain that he failed to turn around and ultimately liquidated.

“He’s not pursuing Barneys,” said a source familiar with Baker. “He doesn’t need another acquisition unless it’s really strategic.” Baker has also reportedly been more interested in Saks Fifth Avenue in the past.

“I would be surprised if Richard was interested [in Barneys],” said one retail ceo. “He has to keep consolidating what he has.”

“I really doubt TPG would be interested. They have their hands filled with Neiman Marcus,” said a source familiar with Texas Pacific Group. “Who knows if they met with Ron Burkle. I would be really surprised.”

“These are challenging times for everyone,” said one key Italian vendor to Barneys. “We met with Barneys in August and came up with a payment plan, net 90,” meaning “they have been paying” on shipments 90 days later, compared with the usual 30 to 60. “Compared to Saks or Neiman’s, there are less problems with Barneys. Their men’s business has definitely picked up, from October on.” The vendor said he was shipping resort and would start shipping spring at the end of January.

“The management is the best, but not having a ceo doesn’t help. There is no point person to talk about the entire business,” the vendor said.