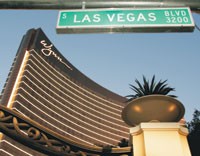 LAS VEGAS — Steve Wynn doesn’t do anything small, and his latest $2.7 billion resort, called Wynn Las Vegas, is no exception. Its goal is simply to be the ne plus ultra of luxury hospitality and retailing.

And it’s off to a good start. The 75,000 square feet of retail space alone is a Who’s Who of luxury brands, including Dior, Cartier, Brioni, Chanel, Louis Vuitton, Graff, Oscar de la Renta, the second Manolo Blahnik store in the U.S. and Jean Paul Gaultier. Not to mention a Maserati and Ferrari dealership.

Then there are the other details of the 217-acre resort at the corner of Las Vegas Boulevard and Sands Avenue on the site of the old Desert Inn. It employs nearly 10,000 people, features a 140-foot man-made mountain with 1,400 trees and 25,000 shrubs, an 18-hole golf course where guests can tee off for $500 and outdoor lakes and waterfalls that conjure up images of the mythical island Avalon. Perhaps most shockingly, the resort is bathed in natural light — practically a sin in Sin City.

The resort opens tonight with a private party for Wynn’s wife, Elaine, where 100 guests will celebrate her 63rd birthday. At midnight, Wynn will hand the “keys” to the hotel to his wife and will officially open the casino doors to the public.

The festivities will continue over the next few days, with Manolo Blahnik making a personal appearance in his store on Friday and Oscar de la Renta doing the same in his unit on Saturday.

But even as Wynn celebrates the opening of his latest resort, he already has plans to expand it. While details haven’t been finalized, Wynn is preparing a second phase, called Encore, that will add another 90,000 square feet of retailing space.

It’s that brazen confidence that lured luxury retailers to Wynn in the first place.

“I think it is the best place to be in Las Vegas,” said de la Renta, whose third U.S. boutique is at Wynn. “I really like that he strives for excellence, and he has single-handedly in a lot of ways changed what Vegas is about. It’s not just a place where people go to gamble; it’s where they go to see the best shows and restaurants and shops.”

In fact, gambling has now taken third place in Vegas behind entertainment and shopping as the reason people come to the city.

So Wynn’s bet on luxury retailing is clearly a safe one. Las Vegas already is challenging Los Angeles for dominance in the western U.S. when it comes to retailing, and more and more brands are flocking to the gambling mecca to open not only their first units, but also their second and third ones.

It turns out that, once in their hotels, Las Vegas tourists — all 36 million of them annually — prefer to stay put, and don’t trawl the Strip as they used to. So brands are finding that they can open a store per resort and still do great business.

And developers know it. As of last fall, there were $6.2 billion in retailing and entertainment projects under way in the city — including the Wynn resort. Wynn’s opening follows last October’s big splash for the expansion of The Forum Shops at Caesars Palace, which includes stores such as Harry Winston, Baccarat, Juicy Couture, Carolina Herrera, Scoop NY, Celine, Pucci, Kate Spade and Dior.

The manner in which Wynn convinced Dior to open its third store in Las Vegas exhibits his old-school style of conducting business while pushing the envelop of innovation. Wynn and his wife visited the fashion house’s chief executive officer Sidney Toledano in his office at 30 Avenue Montaigne in Paris while shopping at the boutique downstairs.

The result of that “impromptu” visit is the 3,900-square-foot Dior store at Wynn, which is the jewel of the retail corridor and features only the second U.S. Dior Homme store.

“When Steve came to us years ago in Paris and met with us here and presented his concept, that day we were committed to go with him,” said Toledano. “And Steve wanted the men’s store in Vegas, he thought it would be great.”

Wynn used a similar style to pluck his vice president of retail, Terri Monsour, from her 23-year career with Neiman Marcus for her position as the general manager of the company’s Las Vegas store.

“He called and asked if I was interested in seeing his project,” said Monsour, who remembers when she first toured the Golden Nugget — Wynn’s first venture — decades ago. “I don’t have to worry that the experience here will be eroded by [other shops] that are not on the same level, like when you walk out of this beautiful Neiman Marcus [at Fashion Show mall here] and find a Payless.”

The idea of such a pure luxury environment has drawn the retailers like bees to honey.

“The client of that hotel is someone more sophisticated than we’ve ever seen before in Vegas,” said Umberto Angeloni, chief executive officer of Brioni. “The roster of brands he has assembled is about uberluxury and therefore just perfect.”

To show its confidence, Brioni has opened its largest store in the world at the resort. The 5,000-square-foot unit will feature both men’s and women’s products, and Angeloni expects it to be one of the company’s top producers in sales terms.

Henri Barguirdjian, president and chief executive officer of Graff USA, agreed with Angeloni. “The level of luxury at the hotel is unparalleled and the level of retailers is unbelievable,” he said of the resort, where the company has opened a 1,700-square-foot store and is bringing in blue and pink diamonds especially for the opening ranging in size from two to 30 carats. “I think it’s going to be a very successful store because the Wynn is going to get the most affluent people who come to Vegas.”

The idea of evading luxury erosion permeates every level of the hotel, from the Chanel-influenced bouclé suits worn by front desk staff to the John Varvatos outfits worn by the dealers at the casino and even into the hotel’s gift shop, where the T-shirts are made by Bogner, as are the valet uniforms and those of the golf caddies. Emporio Armani was responsible for the hostess uniforms and Harrari did the outfits for Okada, the resort’s Japanese restaurant.

“Steve went to Germany himself and met with [Willie] Bogner to help design the T-shirts,” said Elaine Wynn.

But, on occasion, Wynn’s personal approach with the designers at the resort didn’t work — at least immediately. Such was the case with wooing Manolo Blahnik.

“We started calling [Manolo] a couple of years ago, but we couldn’t get a call back,” said Elaine Wynn. “It turns out that he didn’t know who Steve was.”

Wynn, who was urged by his wife and all her shoe-obsessed friends to bring the designer to the resort, was incredulous at first and didn’t want to do business with a man who wouldn’t return his calls.

“Steve said, ‘I don’t care who he is, if he doesn’t return my phone calls, I’m not having his store in my hotel,’” said Elaine Wynn, laughing.

Clearly, his wife won that argument. And for Wynn, it’s all part of the fun.

“This is the result of a lot of experience,” said Wynn, who likens the innovation that went into building his latest resort to “Picasso distorting the human form.”

It is telling that Wynn, who has an impressive collection of some of the finest art in the world, would compare his project to the creation of modern art masterpieces. And utterly ironic that the soft-spoken visionary, as some would call him, suffers from retinitis pigmentosa, a degenerative eye condition that could eventually lead to blindness.

For all his grand ideas, there seems to be an understanding of the significance of what he has achieved with his latest leap. “People don’t just spring into innovation, they come into it,” said Wynn of his almost 30-year career in Las Vegas.

Wynn, whose waning vision will occasionally cause him to do things such as dip his hands into a glass of water while searching for his glasses on the table, nonetheless walks around the resort confidently admiring his own masterpieces and laughing about how much trouble he had naming the place after himself.

Originally, he planned on naming the resort after his favorite Picasso, “Le Reve” (which means “the dream” in French), but extensive polling showed that people didn’t understand the name or identify with it. Only after being told what it meant did half of those polled say they favored it.

In the end, Wynn did it the old-school way once again and called on the boys.

“I called Barry Diller, Steven Spielberg and Donald Trump to ask them all what they thought,” said Wynn, who went on to deadpan an impression of each of his three powerhouse friends — Diller with a heavy New York accent, a quiet Spielberg and a boisterous Trump — with whom he has always been affectionately, yet fiercely, competitive.

The person who convinced him in the end was, not surprisingly, Trump, who seemingly can’t do anything without attaching his name to it. Even while telling Wynn that “they’ll crucify you,” The Donald said Wynn had nothing to lose in naming the resort after himself.

When asked how he feels when he sees his colossal project near completion, Wynn smiled and said, “Grateful. Very grateful.”

But when asked if he was done yet, he laughed and said, “No way.”

While Elaine Wynn said that, for her part, she doesn’t know if she has the energy for another undertaking of this magnitude — after all, the entire project took five years — her husband, also age 63, has no plans to retire.