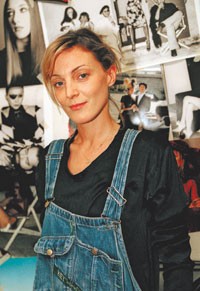 PARIS – Phoebe Philo’s reign at Chloé is over.

The designer, who helped catapult the growth of the Parisian brand with coveted handbag designs and feminine frocks, today will announce she is resigning from the firm for personal reasons, according to market sources.

WWD first reported on Nov. 22 that Philo was eyeing the door.

Rather than any explosive conflict, Philo’s desire to spend more time with her family and new baby, Maya, was increasingly at odds with the demands of one of the fastest-growing European fashion houses.

A successor is not expected to be announced immediately and the fall collection, to be presented here in March, will be designed by the in-house team, one source said.

That team – Sara Jowett, Natasha Lee, Valeska Duetsch, Adrian Appiolaza and Yvan Mispelaere – filled in for Philo during her maternity leave and took a bow on the runway in her stead last March.

However, a search for a successor to Philo is said to be under way, with all options being considered, from a team effort to internal promotion.

Rumors already have been swirling, with Roland Mouret floated as a potential candidate. But informed sources said no contact has been made between Chloé chairman and chief executive Ralph Toledano and the London-based designer.

Neither Philo nor Toledano could be reached for comment Tuesday.

Chloé has been one of fashion’s fastest-growing brands in recent years. When Johann Rupert, chairman of Chloé parent Richemont, reported first-half profits in November, he vaunted the brand’s strong performance.

“This business has outperformed its peers, more than doubling sales in the six months under review,” he commented. “Chloé is developing its wholesale business and rolling out its international retail expansion program.”

The company just unveiled a second store in Paris, on the Avenue Montaigne, which it plans to fete in January during the Paris couture.

Last year, Chloé inaugurated boutiques in Kuwait; Costa Mesa, Calif.; Beijing, and Shanghai. This month, a new flagship will open in Tokyo, in the heart of the Aoyama district.

Market sources estimate the brand generates wholesale volume of $300 million. But ambitions are much higher. Last year, Richemont confirmed it would invest “tens of millions of euros” as part of an effort to make Chloé a billion-dollar player.

Philo joined Chloé in 1997 as part of designer Stella McCartney’s creative team. Four years later, she replaced her former classmate at London’s Central Saint Martins when McCartney resigned to set up her own fashion house in a joint venture with Gucci Group.

With her good looks and striking personal style, Philo had all the makings of a fashion star. Indeed, she succeeded in accelerating Chloé’s rejuvenation, making it one of the hottest shows in Paris and one of the top-selling designer brands from New York to Hong Kong.

Still, she has been uncomfortable with the fashion spotlight for some time, shunning media attention in an era when it is vital for an international fashion company.

Philo also is said to have struggled with the growing pressures and responsibilities at a brand eager to develop new categories like costume jewelry, watches, lingerie and baby apparel, while pumping up the scope of its diffusion and fragrance businesses.

Her family life, centered in London, increasingly kept her away from Paris despite growing leadership needs. Chloé recently shifted its design studios to London to accommodate Philo, but it was a problematic arrangement, sources said.

Despite signing a new multiyear contract in 2005, Philo had been negotiating with Chloé in recent weeks to resolve the impasse, but no agreement could be reached.

Chairman and ceo of Chloé since 1999, Toledano has a reputation for sniffing out design talent. Before Chloé, he headed Guy Laroche, where he recruited a then-unknown Alber Elbaz from the studio of Geoffrey Beene.

Elbaz’s flair at Laroche won him the job of replacing Yves Saint Laurent as designer of YSL Rive Gauche ready-to-wear. But Elbaz lasted only three seasons, and he subsequently went on to lead a renaissance at Lanvin, building the house into one of the most sought-after Paris brands.