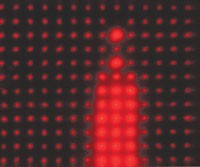 Simplified
Eight artists from New York and San Francisco explore the super low-resolution medium of LED animations in Superlowrez. Each work measures 12 inches by 14 inches and contains 168 light-emitting diodes, or one per square inch. Each LED can show eight levels of brightness. The displays, which were built and programmed by art-technology firm Bit Editions of Philadelphia, contain 128 kilobytes of memory and can show animations of 1,984 frames. Jude Tallichet re-created a snippet of Andy Warhol’s film of the Empire State Building, left. Akiko Sakaizumi comments on society and gender by tweaking the imagery and narrative of early video games. Joe Amrhein’s digital canvas blinks and squirms with the vocabulary of art criticism (“faux-naive,” “seductive,” “overcaffeinated”). At vertexList in Williamsburg, Brooklyn, through Sunday.

Fashion Game
Edoc Laundry’s new line of T-shirts and accessories tells a story. Each screen-printed, embroidered item contains hidden clues and codes. When you decode a password, you gain access to part of an ongoing mystery yarn on the company’s Web site. Shirts retail for $32, backpacks for $60.

Pay by Phone
Pay for gas, snacks and milk with a cell phone instead of cash or a credit card when MobileLime rolls out a new version of its service later this year. Now the company requires only a tap of the cell phone on a card reader. Previously, MobileLime users had to call a toll-free number and enter a merchant location ID.