Bravo to Check Out: Burberry CEO Will Exit Company in July 2006 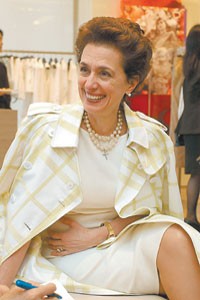 The American will not renew her contract as chief executive officer when it expires in nine months, sources close to the British luxury brand said Wednesday. Her departure will come after Burberry is fully demerged from Great Universal Stores, which currently owns 66 percent of the company.

G.U.S. said in May the demerger is expected to be completed some time this year. Burberry had a partial flotation on the London Stock Exchange in 2002.

A Burberry spokeswoman in London said Wednesday night about reports of Bravo’s departure: “We’ve always said Rose Marie Bravo’s role would evolve over time. Indeed, it already has evolved over the past two years, as we have built up a first-class senior management team, which now includes Brian Blake and Stacey Cartwright, as well as Christopher Bailey in creative and design. This is all something the board is very mindful of. We will update you in due course, when we have something to update on.”

Bravo has increased Burberry’s market capital tenfold since her arrival and it has helped make her a wealthy woman. In 2003, her bonus equalled 100 percent of her annual salary and she took home $3.6 million, compared with $3.2 million the year before. Last year, Bravo was paid a total of $3.8 million.

But the real wealth came from stock options, with Bravo’s total pay package last year — including options, salary, bonus, benefits and allowances — coming to $15 million. She has regularly cashed in stock options, most recently last July when she earned another $14.2 million by doing so.

While her departure will come as a surprise to some, Bravo, 54, hinted two years ago that her time at the brand might be winding down. Her contract was originally due to expire this past July, but she agreed to extend it for another year. After 2006, Bravo had agreed to sign only one-year contracts.

She also has prided herself on training strong executives who one day might take over as ceo. After Thomas O’Neill left Burberry in May 2004 to become ceo of Harry Winston, she tapped Blake for the role of president.

Bravo’s turnaround of Burberry over the last eight years has become a blueprint for a slew of other luxury brands, so much so that many industry executives began using the phrase “doing a Burberry.” Bravo, the former president of Saks Fifth Avenue, arrived at the-then 150-year-old brand when it was known mainly for making mannish-style trenchcoats and its headquarters were in a fusty building in East London.

Working 14 and 16 hour days, the charismatic, hard-charging Bravo quickly recruited a team of fellow Americans — many of whom worked with her at Saks or at her previous stint at I. Magnin — and set about turning Burberry into a luxury brand. She launched a high-end line called Prorsum and recruited Roberto Menichetti from Jil Sander to design it; spiffed up its showroom in Haymarket, central London, and began methodically to build the brand’s presence in such areas as accessories, fragrance, children’s wear and even home goods.

The first few years were difficult ones and Burberry’s results suffered as Bravo cut back on distribution of the brand and invested in design, marketing and building her team. Menichetti’s collections received mixed reviews, but were seen as important to build the brand’s image even though Prorsum was not widely distributed. Much of Burberry’s revenue came from its Burberry London collection, then operated separately from Prorsum and designed by Deborah Lloyd (who eventually left the company to join Banana Republic).

Menichetti left Burberry when his contract expired after three years and in May 2001 Bravo tapped the soft-spoken, unflappable Bailey, who was an assistant to Tom Ford at Gucci. Bailey’s Prorsum collections for women and men have won universal praise during his tenure and he also oversees the Burberry London design team so the two lines are more in sync.

At an early stage, Bravo also tapped Fabien Baron and Mario Testino to shoot new ad campaigns for Burberry that played up the brand’s British eccentricity and starred everyone from Kate Moss and Freddie Windsor to Stella Tennant.

G.U.S. remained patient, which Bravo has always applauded. Last November, at the WWD/DNR CEO Summit in New York, Bravo said, “I would suggest anyone trying to do a turnaround, you really have to bank on, as we say, three to five years to really manage it and have people believe in it and believe in you and believe in the team and stick with it. So that’s the real key.”

Bravo held back on investing in new stores until she felt the collections were right, and then opened a major flagship on New Bond Street in London with a lighter, airier feeling than the brand’s previously mahogany-dominated ones. A string of others has followed in major cities worldwide, most recently in Istanbul.

Meanwhile, Victor Barnett, Burberry’s then-chairman and a G.U.S. board member, made deals for the brand’s lucrative licensing deals, first in Japan and then in Spain. Burberry bought back the license in Spain, its second-largest market, and renegotiated the terms of the one with Mitsui in Japan.

The deals had a huge impact on Burberry’s profits and sales and catapulted the brand into one of the fastest growing in the luxury arena. Sales, which were $460 million when Bravo arrived, are now more than $1.2 billion. Burberry reported an 18.2 percent increase in net profits to 109.9 million pounds, or $202.9 million, on a 5.9 percent rise in sales to 715.5 million pounds, or $1.32 billion, for the fiscal year ending March 31 and had similarly strong growth in the first quarter ended June 30.

Bravo began her career at Abraham & Straus in 1971, joined Macy’s in 1974, and rose through the buying and merchandising ranks, primarily in cosmetics and fragrances, ultimately becoming a general merchandise manager at Macy’s East.

She was chairman and ceo of the former I. Magnin chain for five years, from 1987 to 1992, and joined Saks as president in September 1992. There, she was credited with with positioning Saks as a major fragrance launch store and with beefing up the merchandise at critical locations — the “A” stores — by striking deals with designers to get exclusives in some markets. Labels such as Prada, Jil Sander, Issey Miyake, Jean Paul Gaultier and Zoran, once monopolized by Neiman’s and Barneys New York, could now be found at some Saks units.

Five years later, in September 1997, she shocked the industry when she announced she would join Burberry Worldwide as ceo.