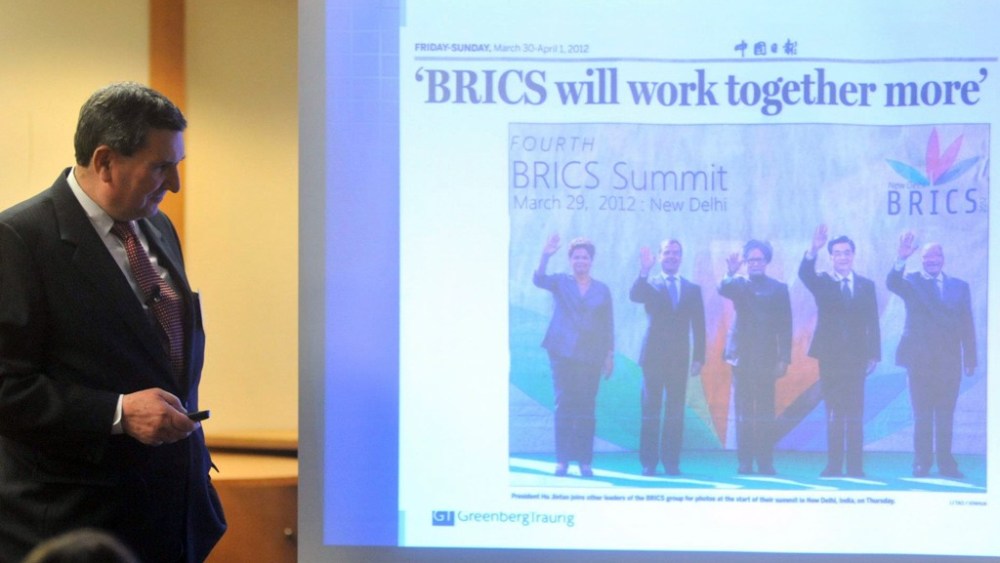 NEW YORK — The BRIC countries may represent huge potential for luxury goods brands, but there also are major pitfalls.

Anna Stupnytska, executive director and macroeconomist in the Asset Management division of Goldman Sachs, said, by 2050, Brazil, Russia, India and China, along with the U.S., could be the largest five economies in the world. Stupnytska said the estimate is that by this time about 2 billion people globally will have joined the middle class, 300 million from the BRICs alone.

“China could become the largest luxury market within this decade, overtaking Japan, and this means that the consumer theme in the BRICs is still intact,” she said at a Fordham Law Institute event, “Fashion = Art + Commerce.” “The last decade has been relatively easy for brands — you go into the BRICs, you invest and it pays off. Now this decade is going to be much more subtle. China is going from an economy driven by manufacturing to one being driven by the consumer. Russia has political risks and many companies are scared to do business there because there are no protections for intellectual property rights. In Brazil, the currency is overvalued. India also has political problems, such as policies that make it difficult for foreign firms to enter the country.”

Owen D. Nee Jr., senior counsel at Greenberg Traurig, who has spent the last 30 years in China, noted that the country today is the second-largest market for Coca-Cola, General Motors, Volkswagen and Boeing; is the top producer of mobile phones, TVs and air conditioners, and remains the largest source of textile products worn in the U.S.

He said China’s 12th “Five-Year National Plan” for 2011 to 2015 is focused on the development of the urbanized consumer economy. In 2011, the lower-middle class in China was 290 million people, or 44 percent of the population, accounting for $600 billion in spending, Nee noted. By 2025, this group is projected to reach 520 million, or 50 percent of the urban population, with spending power of about $2 trillion.

Nee said among the unknown factors in China are how the country will react to economic problems down the road, and if the newly rich middle and upper classes will demand a greater role in the political sphere.

“There’s also a possibility of the balance of trade shifting in favor of the U.S., as China becomes a consumer market and manufacturing is focused on made in China, sold in China,” he said.

Nee also said most experts look at China’s evolving dynamics in commerce and social culture and assume it will achieve its goals, whereas, “It could in fact not succeed. It is a state-planned economy and country, and state planners do from time to time make very big mistakes.” On the other hand, China’s plans could come to fruition so much so as to make fashion, for instance, shift from being influenced by American and European design to being China-centric, where “Chinese brands are on the retail shelves in the U.S. and Europe.”

Sabina Lozovsky, director of special projects at the Russian-American Foundation, noted that the Russian apparel market is considered one of the fastest growing in the world, with 25 percent annual sales growth in 2011, with the accessories market increasing 35 percent.

“Many leading global brands have established their presence in Russia and have announced expansion plans,” Lozovsky said. “Russia has the third-largest concentration of millionaires in the world after the U.S. and Germany. However — and when talking about Russia you always have to come to however — the fashion market is as contradictory as Russia itself. It’s mostly based on imports, with its retail market being the largest in Eastern Europe and the sixth largest in all of Europe. The luxury market alone is $2 billion in clothing, shoes and accessories. In all that wealth and largeness, Russian brands account for less than 20 percent of the market, despite the fact that there are some very interesting designers that present their collections in Paris, Milan and New York.”

She said the main problems with manufacturing in Russia or bringing brands there are protective barriers such as high customs duties and value-added taxes, and widespread corruption in government agencies.

“Russia has never signed any international intellectual property [agreements],” Lozovsky added. “It’s a high-risk market, which is why very few outside retailers have ventured into it.”

She noted that even with Russia joining the World Trade Organization this year, in which it must adhere to global trade rules, “it’s a transition that will take five to seven years,” during which time “Russia has to seriously fight corruption and counterfeiting.”

Heike Bhonsle, anticounterfeiting director at Lacoste USA, said, “My personal experience is that, for counterfeit merchandise, the number-one country in any class of product is China, nothing even comes close.” Bhonsle said Lacoste’s involvement in the BRIC countries is that its product is distributed in all of them, and 40 percent of the apparel for Lacoste is manufactured in China, with some made in India, as well.

Vincent Bevins, a reporter for the Financial Times based in São Paulo, noted that Brazil is the sixth-largest economy and growing quickly, but problems exist.

“In the last 10 years, we’ve had 40 million people rise out of poverty, while the superrich have also gotten much richer, and across the board you have an increased appetite for luxury goods and fashion goods,” Bevins said. “On the other hand, the fashion industry is in crisis because Brazil has become an extremely expensive place to do almost anything. It has become almost impossible to produce clothing…in the last 10 years. What you’re seeing now is the death of manufacturing in Brazil and a crisis for the government of President Dilma Rousseff. The fashion industry is dying at the same time there is a big demand for fashion. São Paulo is now the most expensive city in the Western Hemisphere. People go to Miami and New York just to buy clothes and consumer goods.”

Stupnytska added that the BRIC countries “are working together in certain areas such as convertible currencies, but they are also fighting among each other for markets. Economic interests are creating tensions, but it’s also about politics. They’re all trying to figure out how to be a big voice on the international stage.”