Deloitte, the administrator to the group, said 202 employees will be laid off, while more than 1,800 will be furloughed.

A look from the Warehouse capsule created in collaboration with the Barbican.

LONDON — British high street chains are falling like dominoes into administration, with Oasis and Warehouse the latest names to seek protection from creditors.

Deloitte confirmed Wednesday that two of its restructuring partners, Rob Harding and Richard Hawes, have been named joint administrators to the fast-fashion retailers Oasis and Warehouse. Deloitte will also wind down The Idle Man Limited, a British online men’s wear brand that was purchased by the Oasis and Warehouse group last September.

The group employed more than 2,000 people in total in the U.K. at the time of the appointment and Wednesday’s announcement will result in 202 layoffs. A total of 41 head office roles will be retained to assist the administrators, while 1,801 employees will be furloughed across head office, stores and concessions, Deloitte said.

It added that the Oasis, Warehouse and The Idle Man brands will continue to trade online in the short term while the administrators “assess options for the future.”

The brands trade from 92 branches across the group’s leasehold stores, with 437 concessions located in third party retailers. 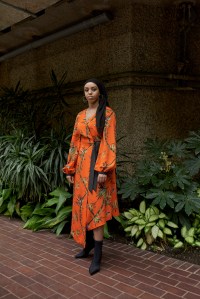 A look from the Warehouse capsule created in collaboration with the Barbican Center.  Courtesy Photo

In the past few years, Warehouse in particular had tried to set itself apart from competitors with a series of high-profile collaborations under brand consultant Alasdhair Willis.

In 2018, it explored its artistic side, joining forces with the Barbican, the international arts and learning center in east London, on a spring women’s capsule range. The year before, it partnered with the model Julia Restoin Roitfeld and the fashion writer Pandora Sykes, who curated key items in-store and online.

During those years, Warehouse also embraced digital and pursued more streamlined collections that were constantly refreshed.

Deloitte’s Harding said that COVID-19 has had “a devastating effect on the entire retail industry, and not least the Oasis Warehouse group. Despite management’s best efforts over recent weeks, and significant interest from potential buyers, it has not been possible to save the business in its current form. Therefore, today it has been placed into administration.”

He said Deloitte would now investigate options for the business during “an unprecedented and difficult time.”

Hash Ladha, chief executive officer of the Oasis Warehouse group, said no one could have predicted this situation a month ago.

“It comes as shocking and difficult news for all of us. We, as a management team, have done everything we can to try and save the iconic brands that we love. The business is full of tenacious, talented and determined people. I am confident that my colleagues, together with Deloitte, will find the best outcome for the business,” Ladha said.

The group has been owned since 2009 by the Icelandic bank Kaupthing, which had purchased Oasis, Warehouse and other brands from Baugur, the ambitious and acquisitive Icelandic group that went bust during the credit crisis of 2008.

Oasis and Warehouse are the latest in a long line of brands that have collapsed into administration, or are taking the first steps in that direction. In most cases, these were troubled businesses looking for buyers and the impact of the coronavirus lockdown, store closures and a lack of appetite for buying fashion during quarantine, has pushed them over the edge.

According to the Centre for Retail Research, some 20,620 stores in the U.K. will shut in 2020, 27.1 percent more than last year. The CRR said that losses caused by a combination of store closures and businesses slimming down their workforce should total 235,704, 61.5 percent higher than in 2019.

It added that the cost to the retail industry in terms of lost and unsaleable stock if shops are shut for the three months to June would be about 20.9 billion pounds.