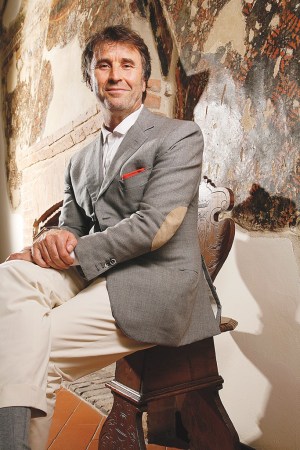 MILAN — Brunello Cucinelli SpA has started the process to list on the Italian Stock Exchange.

“The Bourse is an important step for growth, in line with our entrepreneurial philosophy,” said Brunello Cucinelli, founder of the namesake Italian luxury fashion house. The listing could take place by May or June, in light of the time frame necessary to receive approval. Mediobanca has been tapped as the sponsor and as joint global coordinator along with BofA Merrill Lynch. Cucinelli first revealed he was considering an initial public offering in May.

“My goal is to become even more international and attract managers, even those who think differently from me,” Cucinelli told WWD. “The company is 34 years old and my dream is for it to last at least another 34 years. We are based in a small town [Solomeo], which I hope will continue to work in luxury.”

A source with knowledge of the matter said Cucinelli plans to sell a third of his company on the market.

A luxury goods analyst estimated an enterprise value of “at least” 400 million euros, or $526.2 million at current exchange, 12 times the company’s estimated 2011 earnings before interest, taxes, depreciation and amortization of about 35 million euros, or $46 million. “They will leverage on the company’s growth potential and benefit from the enormous echo provided by the listing,” said the analyst.

“I can’t say that I am not influenced by the market’s performance, but I hope that enterprise and finance will return to coexist fully respecting each other’s role,” said Cucinelli. Of the timing for the listing, he said he was “very confident things are improving, and there are great opportunities for companies in the world.”

Cucinelli, who is 58 and has two daughters, aged 20 and 29, said “ownership is inherited, but not the management of a company. If they will be able to manage it, they will; if not, there will be someone who can do it,” he said.

Stefano Corneliani, senior analyst at Intermonte SIM, said this is “an epochal turn for a group of this size, and the listing will have reverberations internationally.” He said the IPO marks the entrepreneur’s “understanding that his group has arrived at a turning point, beyond which the company needs a more structured management and organization, to partly release the company from family dynamics.”

“This is an excellent decision, which will help the company gain further notoriety, add to its image and be beneficial to the firm,” said a Milan-based luxury good analyst, who requested anonymity. “It also helps reinvigorate interest in the luxury goods sector and add luster to the Milan Bourse, also given Benetton’s steps toward the delisting.” As reported, the Benetton family plans to take the Italian and textile clothing manufacturer private.

A London-based analyst said “the appetite for luxury is very high and this IPO shows that Cucinelli is upbeat about the outlook.” The analyst praised the entrepreneur’s decision to list in Italy, “where the company’s heritage lies.” Cucinelli has always said he was planning to go public in Milan as he feels “very, very connected to Italy and my territory, Umbria and my country.”

Cucinelli, who describes himself as the “custodian” of his company, said he hoped the stock market would help the brand “grow in a healthy, gentle and sustainable way.” He continued: “We are ready to open the doors of the small town of Solomeo to investors and partners that will want somehow to feel as the new custodians for the next decades, in the respect of the human being and his moral and economic dignity.”

Cucinelli stands out against an industry racing at breakneck speed. He is a humanist and a philosopher, who has lectured on humanism in business at Harvard, and in 2010 received an honorary degree in ethics and philosophy from the University of Perugia. Rather than speaking of new media or financial analysis, he talks about “bringing back moral and economic dignity to work.” He has written a book called “Riflessioni” — the title translates as “Considerations” — in which he imagines a dialogue between the Roman emperor Marcus Aurelius and President Obama. He describes his employees as “beautiful souls.”

But the soft-spoken Cucinelli also has built a strong business reputation over the course of three decades. His brand, known for its rich cashmere sweaters, luxe sportswear and elegantly laid-back tailored clothing, has weathered the economic downturns of recent years and expanded globally. A listing would help provide the funds to further penetrate new and emerging markets.

Cucinelli bought a 14th-century castle and surroundings in Solomeo, in Italy’s central region of Umbria, in 1985 and restored it over the next 23 years to provide an environment for the company’s workers. In 2008, he unveiled a new theater complex, followed two years ago by a library.