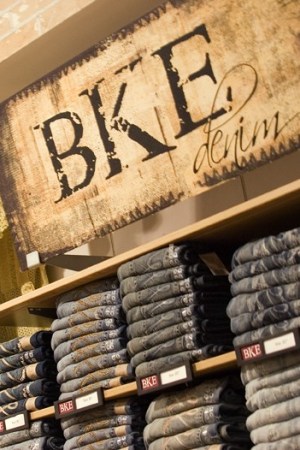 Retailers have plenty of good explanations for recent declines in same-store sales. But The Buckle Inc., which made jaws drop Thursday with its 21 percent February increase, has difficulty explaining why it does so well.

The highly successful — but famously low-profile — firm, based in Kearney, Neb., has been a source of wonder during its recent strong run, but it may become a headache for competitors now as it moves its 391-store fleet to its most easterly point yet.

Buckle brought its winning formula to New York state for the first time with a unit in Buffalo on Feb. 26 and will arrive in Mays Landing, N.J., just in time for the back-to-school season. With a presence in 40 states, Buckle’s greatest concentration of stores is in the Midwest and Texas and its easternmost presence before this year had been in King of Prussia, Pa. Of the 48 contiguous U.S. states, only New York, New Jersey, Connecticut, Massachusetts, Rhode Island, New Hampshire, Vermont and Delaware had been missing from its portfolio.

At a time when most retailers have either closed stores or at least halted openings, expansion may seem like a bold move, but for Buckle, it’s just a “practical approach.” At least that’s what its notoriously understated chief executive officer Dennis Nelson said in an interview with WWD.

That seems overly modest for a company that on Thursday marked its 30th consecutive month of comparable-store sales increases and its 19th consecutive month of double-digit comp advances. Besides February’s rise, January results saw a 20.6 percent increase for the fiscal year ending Jan. 31, along with a 27.8 percent jump in net sales, to $792 million. The company is scheduled to report fourth-quarter results Wednesday and, in the worst retail environment of its existence, is expected to generate earnings of 72 cents a share, according to analysts’ consensus estimates, versus year-ago EPS of 63 cents.

Despite his company’s success, Nelson said he rarely speaks to the media because he “doesn’t have much to say.”

“We realize it’s not easy times out there. We’re trying to take a conservative approach,” said Nelson, who added that when the company sees an opportunity, it “takes advantage.” Some believe that, with mall vacancies growing by the day, Buckle might take advantage more than it has in the past.

It’s certainly in a position to do so. With no debt on the books, and $182.2 million in cash and investments at the end of the third quarter, it currently plans to open 22 stores in fiscal 2009, one more than it launched last year.

The company recently added international shipping to its Web site, but when asked if that indicates Buckle is moving overseas, Nelson said it was “too early to make comments” on that.

But the ceo asserted that expansion plans are all part of a controlled, focused strategy.

He pointed to Buckle’s emphasis on experience and company culture, noting it doesn’t enter markets unless one of its trained managers will move to the new location. All top management has been with the company for at least 25 years, and all of the company’s district managers have about 20 years of Buckle experience. Additionally, half of the retailer’s store managers have been managing with Buckle for more than three years.

The company was founded as Mills Clothing, a men’s store in Kearney, just over 60 years ago and entered the realm of casual sportswear with the acquisition of Brass Buckle in 1967. It became The Buckle in 1991 and went public in 1992, moving to the New York Stock Exchange in 1997.

It has served investors well, with the stock more than doubling in the past five years and, despite following the market down last fall, the shares — when adjusted for dividends and a 3-for-2 stock split last October — have declined less than 20 percent in the past year while the S&P Retail Index has fallen 40 percent. A dollar invested in Buckle when it went public would be worth over $12 today. On Thursday, followed its robust February results, shares advanced $1.78, or 8.1 percent, to close at $23.78 while the S&P Retail Index contracted 3.6 percent.

Buckle’s bread and butter are prime locations in regional malls and lifestyle shopping centers in areas with a population of approximately 300,000, Nelson said, adding the move east is “consistent with what we always do.”

It’s that mentality that has the retail world wondering what exactly is working for Buckle. What is the secret to its success?

“I don’t know if there’s any one answer,” Nelson said.

Whatever it is, it has helped the company churn out impressive numbers, which controller Tom Heacock attributes to an emphasis on “people and product. The culture here is unique. We really feel that it is a team working toward a common goal.”

Employees call each other “teammates” and their customers “guests,” who are counted on as the forward flank of the company’s marketing.

“The customer experience is the best marketing,” said Heacock, who admitted Buckle relies more on “word of mouth” advertising than anything else. “We don’t really do radio, print or television.”

Buckle also uses its Web site and extensive e-mails for marketing and promotional efforts, which include partnering with rock bands like Simple Plan and Nickelback, in order to offer in-store and online promotions that coincide with the release of their new albums. A good part of the marketing spend also goes to in-store signage and print materials.

Susquehanna’s Filandro attributes much of Buckle’s success to the company’s proactive focus on fashion at a time when most retailers are playing defense.

“The uniqueness of their balanced approach on branded and private label apparel, with an emphasis on denim, has been a differentiating factor to their success,” he said. According to Filandro, Buckle has become a “denim destination” because it is continually testing a variety of brands such as Big Star, MEK, Lucky Brand and Silver Jeans in-store.

Furthermore, all denim is customized for Buckle by vendors, he said, and average retail price points range from between $75 to $150, which is “affordable.”

“They certainly have a knack for picking the right brands,” said Sterne, Agee & Leach retail analyst Margaret Whitfield, who noted that while Buckle’s target customer is between the ages of 12 and 24, the retailer appeals to shoppers up through their late 30s as well. She also said that because Buckle carries larger sizes such as a men’s size 44, and it has a variety of styles and fits, the store attracts a broader range of customers than other retailers.

The fashion mix, which ranges from West Coast-inspired brands like Quiksilver, Roxy and Affliction to branded apparel from Guess, Fossil and Diesel, makes it difficult to pin down who Buckle’s chief rivals are, according to Nelson.

Buckle also has a private label, BKE, whose denim retails between $59 and $78. Private label accounted for approximately 25 to 30 percent of sales for fiscal 2008, chief financial officer Karen Rhoads said in an interview with WWD.

According to Rhoads, BKE has seen “some slowing” as a percentage of sales — last year, the company reported private label sales were about 30 percent — but, overall, it is still growing. The company said that more customers are buying branded apparel than private label, and that is what accounts for the weaker BKE sales.

Overall, Buckle’s men’s business, 31 percent of which was derived from denim last year, was up approximately 26.5 percent through December, while women’s, 49 percent from denim, was up 29.5 percent. Women’s represents about 55 percent of sales and men’s the remainder. During the third quarter, Buckle said average price points for the men’s and women’s business increased 11.5 percent to $50.10, and 2 percent to $43.75, respectively, an accomplishment during a period of price slashing. But the company said the increase in price is a function of brand introductions, or the addition of more details to existing apparel, not necessarily higher initial markups.

How far can the company go?

“I don’t think that long term,” Nelson said. “We offer a good shopping environment for the guest. We don’t worry about the rest. We take it as it comes.”

Perhaps this Zen-like approach is Buckle’s key to success, but when pressed, Nelson’s answer changed slightly.