The second half will be challenging, as the British pound strengthens and Hong Kong deteriorates.

Mahmood on the left wearing a dark suit and holding a Burberry trench coat for the brand's 2019 holiday campaign shot by Mert Alas & Marcus Piggott.

LONDON — With first-half sales and profits on track and a boost from the weaker pound, Burberry is looking ahead — and girding itself for more trouble in Hong Kong amid rising violence and political unrest.

In the six months to Sept. 28, Burberry saw a double-digit sales decline in Hong Kong, where it has 12 stores. The region usually represents 8 percent of overall revenue, but in the first half that figure dropped to 5 percent.

Sales in Mainland China and other parts of Asia compensated for some of the decline — but not all of it. Some business simply evaporated, said Marco Gobbetti, Burberry’s chief executive officer who is headed to the region for the brand’s Ginza store opening in Tokyo and to evaluate the situation in Hong Kong.

“Hong Kong has always proven itself to be resilient, and we have to give credit to the Hong Kongese for having been there through very tough times. They are going through a very difficult moment, and we do not think that in the very near future the situation is going to improve,” said Gobbetti on the sidelines of the interim results presentation to analysts.

“We are always very hopeful that, over time, the tension in the streets will calm down. We can only be hopeful and supportive of our team, and do what we can to mitigate the impact. Hong Kong is Hong Kong. I’m still an optimist, and I think it is a very important trading post in Asia.” 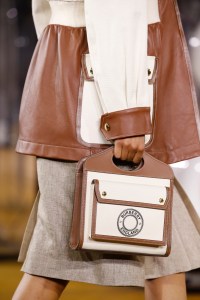 He said Burberry has no plans to close its stores permanently in Hong Kong, which is known as a high-margin market for luxury goods. “We’re not going to make any harsh decisions in Hong Kong without being really certain about what the future is going to look like. We already have our plans for Hong Kong, and they haven’t changed,” said Gobbetti.

During a call earlier in the day, Burberry’s chief operating and financial officer Julie Brown said the company is expecting “continued disruption” in the region over the next six months.

It will also be pursuing rental renegotiations with landlords and growing the local consumer base, which remains strong, Brown added.

Hong Kong was the only big trouble spot for Burberry, which saw first-half revenue grow 5 percent to 1.28 billion pounds on a reported basis and 3 percent at current exchange rates.

Profit after taxes climbed 14 percent to 150 million pounds, bolstered by a number of factors, including the adoption of new accounting standards, IFRS 16, that recognize operating leases as assets and liabilities on the balance sheet. Those new standards added 16 million pounds to the bottom line. 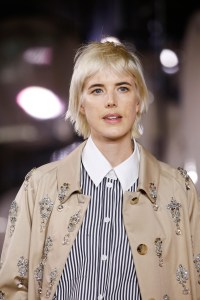 Burberry also benefited from currency tailwinds, which the company said would abate in the second half due to the strengthening pound. Stripping out the impact of those measures, profit after tax was up 11 percent in the first half.

The results sent the share price up 3.4 percent to 21.29 pounds at the close of trading on the London Stock Exchange Wednesday.

Sales in Asia Pacific and Europe, the Middle East, India and Africa were both up 6 percent on a reported basis, while the Americas region rose 2 percent, due to a reduced roster of wholesale accounts.

In the Europe, Middle East and Africa region, the U.K. grew in the high-single digits and Continental Europe grew in the midsingle digits. The Middle East returned to growth in the second quarter, but was negative in the half overall, Burberry said.

The U.S. grew in the low-single digits with a consistent performance across quarters, while Canada and Brazil saw improved trends in the second quarter.

Rogerio Fujimori of Royal Bank of Canada said first-half sales were better than expected, driven by wholesale and retail alike.

He said Burberry management has made “good progress so far” building the foundation to revitalize the brand, but problems could be brewing.

“Burberry is now up against a less favorable external and competitive backdrop at a time when it has to show the market that it is on track to significantly accelerate top-line growth and expand margins from full-year 2021 onward. Brand heat is improving, but we are unsure that it is strong enough to take market share from the sector winners,” he said. 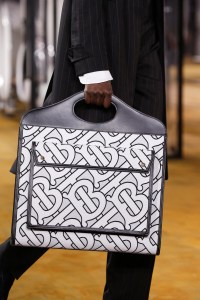 Gobbetti’s overarching goal for Burberry is to reverse the trend of slower growth compared with the brand’s luxury peers. Over the next three years, he is looking to achieve “high-single-digit” revenue growth — higher than the 4 to 5 percent that Bain has projected for the sector in the medium term — and “meaningful” operating margin expansion.

In the first six months, men’s wear was the fastest-moving category, with 12 percent growth, followed by children’s wear with 10 percent and women’s wear with 8 percent. Accessories declined by 2 percent as Burberry continues to phase in new bag styles, including the TB Monogram, Lola and Title — and shift the old styles out.

“We have transformed the offer, and accessories are getting better traction. We are making some of those (new bag) shapes into the pillars, the icons of the future,” said Gobbetti. “We are turning a corner.”

Riccardo Tisci’s collections, meanwhile, delivered “strong double-digit growth” with his new designs now accounting for 70 percent of Burberry’s retail offer. By the end of fiscal 2020 that figure will jump to 80 percent. The remaining retail offer is made up of merchandise designed under former president and chief creative officer Christopher Bailey, who left Burberry in early 2018.

Asked how Tisci’s plan to dress “mothers and daughters, fathers and sons” was developing, Gobbetti said men’s is “working well across the categories, and across the generations of customers, both the tailored part and the more casual, sporty part.” 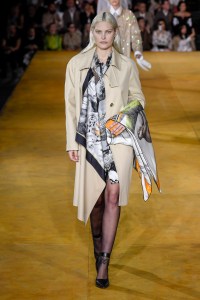 He said Burberry was particularly strong in the jersey category for men and women (no surprise, given the monthly drops of B Series hoodies and streetwear that Tisci introduced shortly after he arrived). The brand continues to build up apparel categories for women beyond outerwear, such as tops, skirts, knitwear and trousers, Gobbetti added.

On Thursday, Burberry also said it had inked an exclusive deal with Tencent, parent of WeChat, to develop social retail in the all-important Chinese market. Chinese consumers – whether they are shopping at home or abroad – generate around 40 percent of Burberry’s overall revenue.

Burberry said it will pioneer a concept with Tencent that blends social media and retail “to create digital and physical spaces for engaged communities to interact, share and shop.”

The brand plans to open a store in Shenzhen the first half of next year, supported by Tencent technology. It will aim to offer “unique experiences” that connect luxury customers’ social and online lives to their physical environments.

The Tencent deal is the latest part of Burberry’s digital push. Last month in London, Burberry introduced Bounce, an online game that allows users to play — and potentially win — a puffer jacket. The idea followed a successful Burberry game in China that uses the WeChat mini-progam framework.

Gobbetti said social media is becoming an important part of the luxury customer’s journey, particularly in the “inspiration phase,” when customers are browsing and learning about brands. “Retail needs to keep pace with this, and China was the obvious place to start. It is one of the leading hubs for innovation and technology, and Chinese consumers are some of the highest users of social media.” 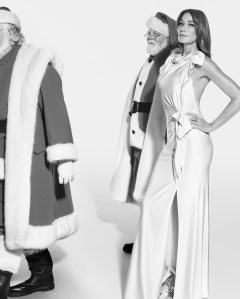 During Thursday’s analyst presentation, Gobbetti was upbeat about the brand’s dynamism and its transformation, despite the drag from Hong Kong and the waning impact of the weaker, post-Brexit pound.

“We are very pleased with where we are today, and we see a brand that’s much more energized,” that appeals to existing and new customers across the geographies. “We are looking forward with a lot of optimism,” he said.

The second half will certainly bring a slew of challenges: Brown said adjusted operating profits now get a boost of just 4 million pounds from currency exchange rates, compared with the previously stated 15 million pounds. Based on Nov. 1 spot rates, revenue will get a 13 million pound boost from exchange rates. 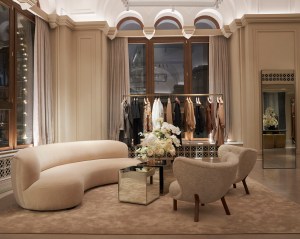 Inside Burberry’s store in Gum in Moscow.  Courtesy Photo

And Hong Kong is expected to remain under pressure.

Asked whether Burberry could ramp up its online offer and digital marketing to circumvent the protests and disruption in Hong Kong, Gobbetti said the in-store experience still reigns supreme — even for the young, digitally minded customers who love nothing more than to explore their favorite brands online.

“For Chinese customers, it’s an experience to go to Hong Kong to shop. It’s not just a play on a price differential. You have the experience of the store, that relationship with the salespeople. If there’s a new collection that’s just been delivered to the store, of course you can shop it online, but that doesn’t completely fulfill all the elements that go into the (shopping) experience.”

Gobbetti also said it’s unlikely that local customers are even in the mood to shop. “Probably, they have more important thoughts in their heads than shopping.”