"We think we can create enormous value out of China," said Burberry's CEO Marco Gobbetti, who is kicking off phase two of his plan for the brand, and preparing to open a super-luxe flagship in Knightsbridge.

LONDON — Burberry is feeling bullish following a bounce-back in sales in the final quarter of last year and is readying for a high-profile return to Knightsbridge in June with a flagship that takes some cues from a new, digitally driven pilot store in Shenzhen, China.

Burberry has emerged from the COVID-19 crisis with fresh momentum, reporting an 11 percent decline in revenue to 2.34 billion pounds in the 12 months to March 27. It was a year scarred by store closures worldwide, a pause in long-haul tourism and uncertainty across all of the company’s major markets.

Yet, as fiscal 2020-21 progressed, sales began to improve thanks in large part to China, where Burberry has been notching double-digit growth despite a global controversy over alleged human rights violations in China’s Xinjiang Uyghur Autonomous Region.

Burberry has been caught up in the controversy because of its ties to Britain and to the Better Cotton Initiative, which last year suspended its activities in Xinjiang due to concerns over alleged forced labor in the region.

Earlier this year, the British government imposed sanctions on some Chinese officials, and has actively been trying to prevent products from Xinjiang from entering the supply chain. 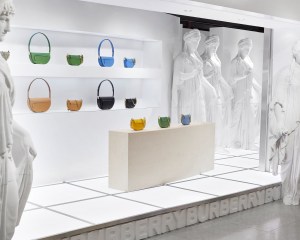 Inside Burberry’s latest pop-up at Harrods.  Image Courtesy of Burberry

Many foreign brands have been ensnared, including Nike, Adidas, Uniqlo and Burberry, which was the first luxury name to become entangled in the controversy. Burberry is a member of BCI and of Cotton 2040, a cross-industry partnership that looks to address long-term resilience in cotton supply chains.

In March, Tencent’s video game “Honor of Kings” canceled its virtual costume collaboration with Burberry, while the brand’s China ambassadors Zhou Dongyu and Song Weilong terminated their endorsement deals with the brand.

Asked about Xinjiang during the 2020-21 results presentation, Burberry’s chief executive officer Marco Gobbetti said “we, like other brands have, and will continue to, navigate through that. Our performance in the region is strong, and the numbers have been very good. It’s a bit early to comment on current trading, but we are pleased with the start of the year, and I can say that the impact has been relatively limited, and it doesn’t modify our overall expectations.”

Gobbetti argued that China remains a primary focus for Burberry, “and will continue to be. We think we can create enormous value out of China, we will continue our investments in our clients, in our partners, in innovation, in localization in everything that we were doing. We are continuing to do, so we remain extremely, extremely confident about the opportunity of that market.”

The company said it maintains “very good relations” with Tencent, the Chinese tech conglomerate with which it partnered on the digital and social media aspects of the Shenzhen store. 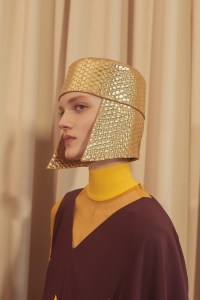 In the fourth quarter, same-store sales surged 32 percent. The increase followed a 9 percent decline in the previous three months due to lockdown-related closures and Burberry’s deliberate clampdown on seasonal discounting. So determined is the company to distance itself from discount culture that it plans to eliminate markdowns in mainline stores entirely by the end of the current fiscal year.

Compared with the corresponding period in 2019 — well before COVID-19 struck — fourth-quarter comparable store sales were down 5 percent, and despite an average 16 percent of stores being closed due to lockdown.

During Thursday’s results presentation Burberry made frequent comparisons to its 2019 numbers, which were not distorted by COVID-19 measures, and which the company said gave a clearer picture of its progress so far.

Burberry has reinstated its dividend to 2019 levels, paying 42.5 pence, compared with 11.3 pence last year, and plans to reintroduce a mid-year dividend in November.

On Thursday, Gobbetti declared phase one of his Burberry strategy done — despite the COVID-19 disruption — and said the company was ready to ramp up growth, which is set to be in the “high single-digits” in fiscal 2021-22.

Over the last three years, he said, the business has been “transformed” and is now anchored in the luxury space thanks to a phase-out of certain wholesale accounts; a crusade to end discounting, and an increase in the quality — and pricing — of Burberry’s leather goods and outerwear in particular. 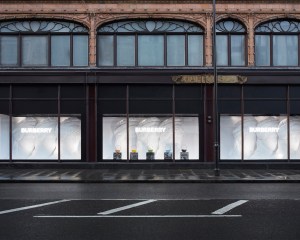 “We have revitalized our brand image, renewed our product offer and elevated our customer experience while making further progress on our ambitious social and environmental agenda,” Gobbetti said during the presentation to analysts.

“In spite of COVID-19, we achieved our objectives for the period and delivered a strong set of results in full-year 2021, ending the year with good full-price sales growth.”

Gobbetti said that, going forward, the plan is to accelerate growth and deliver value creation “while continuing to build a more inclusive and sustainable future.”

Burberry’s results were in line with — and in some cases ahead of — consensus, with Luca Solca of Bernstein noting that the fourth-quarter growth in same-store sales was “better than expected” due to a 60 percent spike in full-price sales in the period.

Now, Gobbetti is kicking off phase two of his Burberry strategy with the opening of the new Knightsbridge store, which he described as “transformational, and a drastic step change,” compared with the old format. He said it “embodies the new Burberry, and our luxury positioning.”

The new-concept store is set to open in early June, taking some of its cues from the Shenzhen unit that Burberry opened with Tencent last July.

Located in a new development at number 1 Sloane Street, not far from the brand’s former flagship at Scotch House on Brompton Road, it spans 15,000 square feet over four floors. 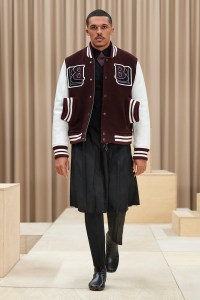 The focus will be on luxury and immersive experiences with a concept meant to “inspire and engage our customers across our network globally.” Some 55 similar new-generation stores — the majority of them in Asia Pacific — are set to roll out this year.

Ahead of the Knightsbridge opening, Burberry has planted its flag nearby at Harrods, opening the first in a series of global “pop-ups and pop-ins” for its Olympia leather bag range. The shop-in-shop will remain open until May 30.

The Olympia, designed by Burberry’s chief creative officer Riccardo Tisci, is a structured, curved leather bag meant to mold to the body’s contours.

The pop-ups will offer 68 different iterations of the Olympia, while the shopfit features statues recalling ancient Greece. The name Olympia comes from the show where the bag made its debut in early 2020, at the Olympia exhibition center in West London.

The Olympia style is the latest example of Gobbetti’s efforts to upgrade Burberry’s accessories offer. In 2018, Burberry purchased its longtime Italian leather goods manufacturer in a bid to exert more control over the products and work closer with the artisans making its bags and leather accessories.

During Thursday’s presentation, Gobbetti pointed out that Burberry’s accessories offer, as well as its outerwear, are of a higher quality and price point than before, part of his overarching strategy to cement the brand in the luxury space.

With outerwear, Gobbetti said Burberry has, over the past three years, expanded beyond cotton and into more technical and eco-fabrics, including nylon, down and quilting. Going forward, the company will also make a bigger push into footwear, which is proving a big draw for customers.

Customers are embracing both categories. Burberry said leather goods saw mid-single-digit growth in the year while outerwear saw high-single-digit growth. Prices will get even higher this year: The company confirmed that sticker prices increased in the “high single digits” in the first quarter, and there are more hikes planned.

Asia Pacific was the best-performing region in the period, with sales up 18 percent, driven by mainland China and South Korea. The company said mainland China saw double-digit growth in the 12 months, with same-store sales accelerating 53 percent in the fourth quarter compared with the corresponding period in fiscal 2018-19.

South Korea also delivered “strong” double-digit growth, while Japan and the South Asia Pacific region declined due to a drop in international tourism. The EMEIA region also fell victim to the decline in overseas visitors, with sales down 44 percent in the year. 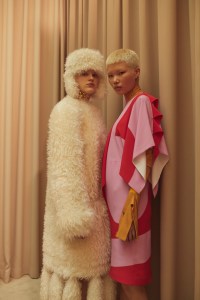 Burberry said the Middle East and Continental Europe both returned to growth by the second half on the back of local sales and tourism.

Kendall Jenner and Bella Hadid undoubtedly gave the brand a boost with their respective ad campaigns.

Last summer, Jenner featured in the brand’s TB monogram campaign. Clad in a bodysuit plastered with an oversize TB print, she photographed herself, at home, on her computer, and as part of the project, Nick Knight shot a CGI video that conjured a spare, surreal world, inspired by skate parks and swimming pools.

A month later, a semi-naked Hadid became the face of Burberry’s first dedicated accessories campaign to promote the Pocket Bag, which became a big seller in the second quarter, along with styles including the Lola, T B Pocket, Title and Olympia.

Looking ahead, Burberry said it will continue to focus on cultivating local clientele given the return of long-haul travel remains “a couple of years away.”

Gobbetti added that Burberry is also ramping up its sustainability and community efforts, and that the company will remain “relentlessly focused” on ESG.

As reported last September, Burberry became the first luxury goods company to issue a sustainability bond raising 300 million pounds on the London Stock Exchange. Its move was part of trend among big luxury companies to seek funds, via private banks or the public markets, to finance sustainability projects.

The company said Thursday it will continue to invest in its sustainability and social goals by becoming carbon neutral by 2022, championing diversity and inclusion and positively impacting one million people in the communities in which it operates.