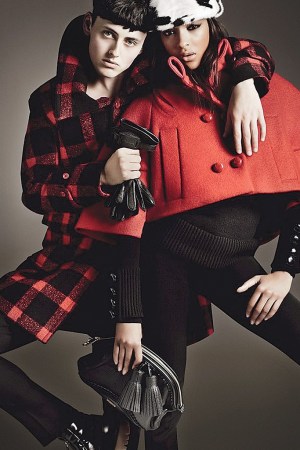 LONDON — Burberry’s burgeoning fleet of retail stores in 25 flagship markets worldwide will continue to be the engine behind growth, said a bullish Angela Ahrendts during a conference call after the company reported first-half profits Tuesday.

Burberry’s chief executive officer said that in the six months to Sept. 30, sales were “very strong and balanced” in cities such as London, New York, Paris, Dubai and Hong Kong, and that retail stores in Burberry’s flagship markets generated more than 60 percent of revenue.

“We have 25 ‘Londons’ around the world — that’s the way we think about it, and that’s where the business is focused now,” said Ahrendts. “What we’re talking about are high-demographic markets that have a strong local clientele and that cater to traveling luxury consumers.”

Burberry said that during the six-month period, comparable retail store sales increased 16 percent, driven by the monthly flow of new product, enhanced replenishment processes, the global buy, sales and service initiatives. The balance of growth came from new stores globally, as well as the units Burberry acquired in China.

Ahrendts also swatted away persistent questions from media outlets about the dangers of a slowdown in Chinese demand.

“China generates 10 percent of our global revenue, so we are not overly dependent on it. It’s a fast-growing market, and we are investing there,” she said. “But of our 25 flagship cities worldwide, just two are in China. Burberry plays in Beijing and Shanghai. It does not play across China.”

A net eight mainline stores opened in the first half, and the company said there would be a continued focus on “flagship openings and refurbishments in high-profile markets.”

Ahrendts named Istanbul, New Delhi and Brazil’s major cities as having the potential of New York and London. “There are pockets all over the world” with pent-up demand, she said, adding, “The luxury sector is projected to be up 10 percent next year, and the flagship markets are also projected to rise.”

Emerging markets, such as China and the Middle East, accounted for 19 percent of wholesale and retail revenue in the period.