Comparable store sales were up 1 percent compared with the corresponding period two years ago, before COVID-19 struck.

LONDON — First-quarter retail revenue at Burberry surged 86 percent in the fourth quarter to 479 million pounds, fueled by continued strong growth in mainland China, South Korea and the Americas. The company said Friday that at constant exchange, retail revenue rose 98 percent in the three months to June 26.

Burberry shares dipped following the announcement, and were down 3.7 percent at 19.93 pounds in late-morning trading on Friday.

“We have made an excellent start to the new fiscal year. Full-price sales accelerated as our collections and campaigns attracted new, younger luxury customers to the brand,” said CEO Marco Gobbetti, who announced his resignation earlier this month, and who will to take up a similar post at Salvatore Ferragamo in Italy. 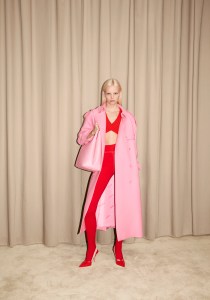 “We saw strong growth across our strategic categories, in particular leather goods and outerwear, and exited markdowns in digital and mainline stores. We continued to roll out our new store concept that will transform how customers experience our brand and product in a uniquely British luxury setting.”

He added that despite the “continuing challenging external environment, we are very pleased with the progress against our strategy.” He said the company is “firmly set on a path of growth and acceleration, we are confident of achieving our medium-term goals”

Burberry pointed out that customers, especially young ones, were buying at full-price rather than waiting for sales.

In the Americas region, the company said it saw full-price comparable store sales more than double, while mainland China increased more than 55 percent and South Korea more than 90 percent compared with two years ago. “This was driven by new, local, young customers buying across our core categories.”

Burberry has also been opening more stores as lockdown restrictions have lifted around the world. The company said that by the end of June, 3 percent of its stores were closed, with 35 percent still operating on reduced hours. It added that business in Europe and much of Asia is still heavily impacted by “the significant decline of international tourist traffic,” due to travel restrictions. 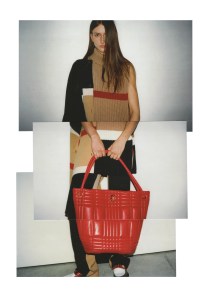 During a call following the results, Burberry’s chief financial and operating officer Julie Brown said the triple-digit growth in footwear sales came from “casual shoes” such as sneakers, with demand particularly strong in the U.S. She added that the Olympia bag — which Burberry marketed through a series of pop-up stores worldwide — was also driving positive sales in accessories.

In the first quarter, Burberry also opened seven new concept stores, in South Korea, Beijing, Osaka and in London’s Knightsbridge, with a focus on immersive experiences and a focus on increased consumer engagement. Burberry will upgrade an additional 55 stores during the current 2021-22 fiscal year, and introduce the new, immersive design concept to three more flagships, in Paris, Shanghai and on Bond Street in London.

Asked about the future of chief creative officer Riccardo Tisci, she said he remains excited about the opportunities he has to put his imprint on Burberry. “We are confident of his position,” at the company she said. Gobbetti and Tisci had worked together at Givenchy in the past, and it was Gobbetti who picked him for the top creative role at Burberry.

She reiterated that Gobbetti would remain until the end of December and said the senior management team was committed to carrying his strategy forward, to pursuing a strategy of full-price sales and would continue to work on improving the margins of the business.