For Californians, whose love of cars makes going to the mall a pastime, premium gasoline prices of almost $3 a gallon cut to the core.

By Nola Sarkisian-Miller and Michelle Tyree on May 11, 2005
View Slideshow 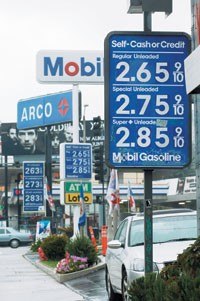 LOS ANGELES — For Californians, whose infatuation with cars helped make going to the mall a national pastime, premium gasoline prices approaching $3 a gallon cut to their very core.

Cheryl Carter, shopping with her 17-year-old daughter, Kelsey, at Urban Outfitters on Santa Monica’s Third Street Promenade, said her family has started carpooling to save money and has reduced apparel purchases.

“When prices started going up, we said [to Kelsey], ‘Start sharing rides with people,'” Carter said. “And if she’s riding with a friend, we make sure that she helps pay for gas … We’re spending less on shopping trips.”

U.S. retail gas prices last week were highest on the West Coast, where the average was $2.48 a gallon, and lowest in the Midwest, at $2.10 a gallon, the Department of Energy reported. The average gas price in the U.S. was $2.19 a gallon last week, 24.5 cents higher than the same time last year, but five cents less than the previous week. Crude oil prices increased for a fifth consecutive day on Tuesday, reaching as much as $53.10 a barrel on speculation that supplies will be tight. The Dow Jones Industrial Average fell 103.23 or 1 percent on oil concerns.

Retailers in California, from Wal-Mart to Gottschalks, and the manufacturers who supply them said they are beginning to feel the impact of the gas price crunch. Even as these costs start to chip away at the bottom line, companies buoyed by the strength of offerings this season are reluctant to pass along these costs to consumers already in pump-price sticker shock. Instead, many are looking at cutting expenses — at least, for the moment.

Perhaps nowhere in the U.S. is the pain felt more than in California, the biggest market and the one that is most dependent on the automobile. In fact, California had three of the 10 most congested urban areas in 2003, the most recent year studied by the Texas Transportation Institute at Texas A&M University.

“At some point, the prices get high enough that consumers will say, ‘I’ve had enough,’ and they will say, ‘I have to do something different,'” said David Pursell, partner at Pickering Energy Partners, a Houston-based energy research firm. “At some point, prices spike high enough and then you kill demand. And then eventually they go back down.”

This story first appeared in the May 11, 2005 issue of WWD. Subscribe Today.

He likened the scenario to the Seventies because “there’s not a lot of excess oil production. Demand is growing and production is having a hard time keeping pace.”

The U.S. consumes 25 percent of the world’s oil. China uses less than 10 percent, although it has been responsible for 40 percent of all growth in oil demand, Pursell said.

“Gasoline demand has been fairly resilient to high prices so far,” Pursell said. “But customers’ behavior is changing because they are spending less money at Wal-Mart and low-end retailers.”

“People are paying a lot more at the pump than they were a year ago, and it is having an effect on the high end [with respect to SUV sales] and on the low end, where people are really squeezed.”

Indeed, some signs of softening are appearing. In general, retailers so far have reported healthy sales, rising 5.8 percent in March to $339.3 billion over March 2004, according to the Commerce Department. The April report is scheduled to be released on Thursday.

At Wal-Mart, which is seeking to open 40 Supercenters in California, same-store sales in April increased only 0.1 percent compared with the same period a year ago. Target was up 1.3 percent.

“It is affecting our sales to the extent that many of our customers live from paycheck to paycheck, so when a cost they incur rises, it reduces discretionary income,” said Wal-Mart spokesman Marty Heires.

Wal-Mart has not been able to pinpoint what percentage of the drop-off is directly attributable to gas prices, only that the effects are significant, Heires said. One area where the company has been able to squeeze costs has been with freight, he said.

“We haul most of our freight ourselves, so we’re in a little better position to control costs in that department,” he said.

The higher prices also have an impact on the sourcing operations of apparel manufacturers who are trucking offshore orders from the ports of Los Angeles and Long Beach to their distribution centers, as well as flying in freight from overseas.

Extra fuel surcharges have contributed to the rise in those transportation costs. They have surged 7 to 21 percent for trucking orders and doubled in the last eight months for air freight, which can cut delivery times to as few as two days from 16, manufacturers said.

Since 1993 California truckers have had the competitive disadvantage of higher diesel fuel prices, typically 20 cents above the national average, because of their clean-air requirements. That may change next year when a national standard for diesel fuel goes into effect.

Jim Famalette, president and chief executive officer of the Gottschalks department store chain, based in Fresno, Calif., said the retailer is paying higher freight costs, but is not passing them on to consumers.

“We’re in a competitive environment,” Famalette said. “So we find other ways to offset the costs. We look at the expense side of the business instead of the side that affects the customer.”

Famalette said the department store chain, which posted a 1.9 percent same-store sales increase for April, was on target to decrease expenses this year.

“In this interim period, the retailer is the one eating the fuel cost,” Tuchin said. “Special orders have become very expensive and those are often associated with back orders or out-of-stock orders, so the price is set and they can’t really pass that charge on to the customer.”

Some vendors, especially those in the moderate category, said they also are willing to absorb the costs to stay in the good graces of retailers and consumers.

To manage his own costs, Halpern said he has started partnerships with factories in China to create vertically integrated operations. He also has expanded his sourcing base to the Philippines and the Middle East. He is upping the ante on spending for advertising, quadrupling his company’s marketing budget to $5 million to drum up brand awareness for his moderately priced jeans that wholesale from $9 to $14.50.

At John Paul Richard, a $120 million moderate misses’ company in Calabasas, Calif., air freight costs have jumped 40 to 60 percent in the last six months, the company said. It relies on that option for 15 to 20 percent of its business, especially when it comes to reorders. With sales ahead 10 to 15 percent this year because of Uniform by John Paul Richard’s colorful camisoles, printed skirts and kurtas selling at Robinsons-May, Macy’s West and Belk Inc., the extra reorder business comes at a steep price.

Reorders have “been a pleasant surprise in terms of sales and helps with margins at your stores, but the air freight then cuts into our margins,” said JPR president Bertan Kalatchi. He said one way to cope is to project sales further out, a strategy made more difficult with the prospect of quota safeguards being implemented this summer in response to surging Chinese imports.

Dress designer Sue Wong, known for her eveningwear and contemporary dress collections made in China, also is coping with a 16 percent increase in fuel surcharges because the company flies in most of its merchandise. But sales are rising and it expects the recent launch of its tops collection to resonate with consumers who are looking for less expensive items.

“The tops offer a similar look to our dresses, but at a much more affordable price with more uses,” said chief operating officer Josh Homann.

Might relief be in sight? Eden Capital’s Antonoff, the company’s lead energy analyst, seems to think so. “I personally believe that crude prices, barring some horrific terrorist act, will come down this summer and we will see lower gasoline prices,” he said.