The fashion group logged a $178 million profit, its second consecutive quarter of gains amid the pandemic.

The fashion group — parent company to the Michael Kors, Versace and Jimmy Choo brands — posted quarterly earnings Wednesday morning before the market opened, beating analyst expectations and logging its second consecutive quarter of gains amid the pandemic thanks to strength in mainland China and its online business. The stock closed up 2.53 percent to $43.81 on Wednesday as a result. 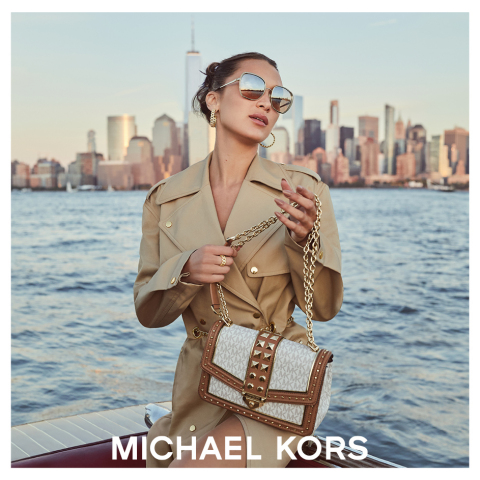 Bella Hadid for Michael Kors, which is owned by Capri Holdings.  Courtesy Photo

“We are a year into the global pandemic that has profoundly impacted the entire world,” John D. Idol, Capri’s chairman and chief executive officer, said in a statement. “Looking back over the last three quarters since the onset of COVID-19, we are encouraged by the performance of all our luxury houses, which illustrates the strength of our brands as well as the resilience and agility of our businesses.

“We were pleased with our third-quarter results as revenue improved sequentially and exceeded our expectations,” Idol continued. “As we continued to execute on our strategic initiatives, earnings were meaningfully higher than anticipated driven by significant gross margin expansion. We also remain encouraged by the double-digit increases in our customer databases as we continue to attract new consumers to each of our luxury houses.”

The biggest headwinds came in the Europe, Middle East and Africa region, thanks to a fresh round of lockdowns in Europe during the holiday shopping season. Idol told analysts on Wednesday morning’s conference call that by the end of the quarter, approximately 40 percent of stores in the region were closed.

“We believe the EMEA results will be a drag and a headwind for the company,” he said.

Other challenges for the company include the women’s ready-to-wear business, specifically dresses, losses from travel retail, the Jimmy Choo business (which Idol said lagged during the quarter because of the absence of a holiday collection) and the potential for higher tariffs if the GPS trade program is not renewed.

But Idol said, “We don’t think this shift is permanent. We think we’ll have a rebound in the latter part of the year, when people are feeling more comfortable. There may be social gatherings and, you know, people will be wanting to get dressed up again. It’s going to come back. It’s not a matter of if; it’s a matter of when.”

For now, there were a few bright spots during the most recent quarter, including Capri’s e-commerce business, where sales surged 65 percent, year-over-year, during the quarter. “E-comm has obviously been the shining star,” Idol said on the call.

Retail sales in mainland China also showed substantial growth, with double-digit gains during the quarter, year-over-year. In addition, the company showed strength in booties and fashion active footwear at Jimmy Choo, accessories at Michael Kors and signature styles at Versace.

Last September, Idol touted Versace as one of the company’s best assets during the Goldman Sachs Annual Retailing Conference, saying that the firm plans to grow the brand to more than $2 billion in annual revenues over the next few years.

Shares of Capri Holdings are up 42.4 percent, year-over-year.

“We continue to view [Capri] as a top idea, expecting them to continue doing exactly what they just did [in the most recent quarter],” Simeon Siegel, managing director and senior retail analyst at BMO Capital Markets wrote in a note. His firm marked Capri “outperform” and set a price target of $48 a share.

The company ended the quarter with $229 million of cash and cash equivalents, $1.2 billion in long-term debt and 1,279 Capri stores, or 831 Michael Kors, 231 Jimmy Choo and 217 Versace locations. The retailer plans on closing roughly 100 Michael Kors stores over the next 18 to 24 months.

“Naturally, we’ll renew those leases of stores that are profitable and the stores that are not we won’t, because it doesn’t make sense for us to do that,” Idol said on the call.

Ike Boruchow, senior retail analyst at Wells Fargo, added that while Capri appears to be in recovery mode, near-term headwinds could pose obstacles. Still, he wrote in a note, “All three brands are benefiting from a material change in inventory/SKU management, while the [Michael Kors] brand is finally targeting lower levels of revenue and focusing more on profitability” with store closures and by shrinking the North American Michael Kors wholesale business.

Capri is not offering forward-looking guidance, but Thomas Edwards, executive vice president, chief financial officer and chief operating officer of Capri, said on the call that the company expects revenues to decline in the fourth quarter at a rate similar to third quarter’s results. In addition, the firm anticipates full-year fiscal 2021 revenues to decline by approximately 30 percent.

Idol added, “By fiscal 2023, we anticipate revenue and earnings per share will exceed pre-pandemic levels. We remain confident that our three luxury houses position Capri Holdings to deliver multiple years of revenue and earnings growth as well as increase shareholder value.”