Vanessa Castagna's run as executive chairwoman of Mervyns is ending after two years. 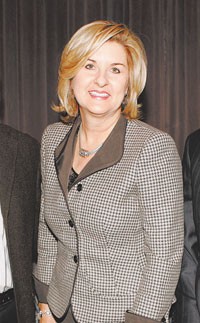 Vanessa Castagna’s run as executive chairwoman of Mervyns is ending after two years in which she sought to revive and reposition the chain as an independent regional player focused on California.

Castagna said in an interview that her exit was a mutual decision with Mervyns’ principal owner, Cerberus Capital Management LP, the New York-based hedge fund that purchased the retailer from Target Corp. in 2004 for $1.6 billion as part of a consortium.

“I had a two-year agreement with Cerberus,” Castagna said. “It was a wonderful experience and I learned so much about private equity.”

She said she planned to join the boards of retail and apparel companies as well as nonprofits, possibly including her alma mater, Purdue University, which she graduated from in 1971.

Cerberus’ plan was to create a portfolio of retail companies, including Mervyns, that Castagna would oversee. However, while Cerberus has been examining potential acquisitions, no other retailers have been purchased and the portfolio hasn’t materialized. Because of that, and because much of the heavy lifting was accomplished, some sources said Castagna’s role was becoming superfluous.

Before she was hired by Cerberus in 2005, Castagna was chairman and chief executive officer of J.C. Penney Co. Inc. stores, catalogue and Internet. She left Penney’s after Myron Ullman 3rd was named chairman and ceo. Before Penney’s, she had been a senior merchant at Wal-Mart.

“After 34 years of the daily grind, I’ve had enough. I’m looking for change,” Castagna said.

She had been working 70-hour weeks at Mervyns, traveling frequently between her homes in Dallas and Naples, Fla., the Hayward, Calif., headquarters of Mervyns, and Cerberus’ offices in Manhattan.

Castagna led the efforts to re-create Mervyns as an independent retailer. That meant establishing an infrastructure with departments such as finance, systems, legal, product development and real estate. Effectively, she was the chain’s ceo, without holding the title. “We had to make a lot of big decisions,” Castagna said.

Among them was closing about 80 stores, exiting markets such as Michigan and Oklahoma, and recasting Mervyns as a nimbler regional chain, concentrated in California, which represents about 80 percent of its $3 billion business. It also caters to Hispanics, who represent about 40 percent of the clientele, and middle markets.

The strongest categories are shoes, children’s wear and casual apparel for the family. Mervyns operates 172 stores and has announced five store openings for this year and two more in 2008. Last year, two stores were opened and two were relocated.

“We changed every single system in the company, from stock ledgers to merchandise allocations, and payroll systems,” she said. “It took four months. It was huge. We did have some corruption issues [in systems] that no one foresaw. We were flying blind for a few months.” While that affected last year’s performance somewhat, Castagna added, “All the systems are doing very well … I feel wonderful about the future of Mervyns.”

Changes were made in the stores as well, from adding new registers and fixtures with higher capacity to display merchandise, to brighter lighting.

Castagna said Mervyns performed well in 2005, but was flat in 2006, a year marked by a good back-to-school season and a disappointing Christmas.

In addition to Castagna, WWD reported that Celia Clancy, a senior operations consultant at Cerberus and associate of Castagna’s, is leaving to take a top job at A.J. Wright, a division of TJX Cos. Clancy would not comment.

Cerberus has been seeking retailers with real estate assets and with upside potential to the operations. The hedge fund teamed with Sun Capital Partners Inc. and Lubert-Adler/Klaff and Partners LP, a real estate company, to buy Mervyns. It is believed that the consortium has done well through sale-leasebacks of many Mervyns locations, and that the retail operation is profitable.

“Vanessa’s leadership was instrumental to Mervyns’ successful transition as an independent company,” Leto said in a statement. “We thank her for her commitment to the company and many contributions and wish her well in her future endeavors.” Leto joined Mervyns about four months before Castagna.

Prior to the sale of Mervyns, some Wall Street analysts forecasted the store’s demise and suggested that Target Corp. poured resources into its Target chain at the expense of Mervyns and Marshall Field’s. Target eventually sold Field’s to May Co., which was later purchased by Federated Department Stores.