Catching Customers on the Downturn

Denim sales in the U.S. have slowed along with consumer confidence and the flagging national economy, which could be good news for mainstream and mass... 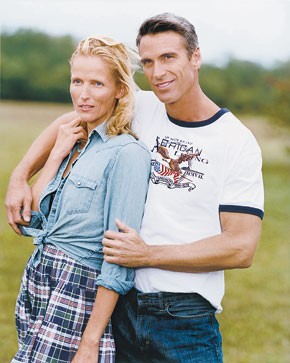 Denim sales in the U.S. have slowed along with consumer confidence and the flagging national economy, which could be good news for mainstream and mass market brands, according to industry analysts and executives.

Jeans sales in the U.S. were off 0.6 percent during the 12 months ended March 31, a period when $15.78 billion worth of jeans were sold, according to The NPD Group consumer research firm. The dip in sales not only reflects consumers buying fewer pairs, but also a shift to buying lower-priced styles, as shopping habits shift in response to disposable incomes being pinched by higher gasoline, energy and food costs.

“The luxury and higher-end brands are going to find the next few months to be difficult because the aspirational customer now thinks twice about purchasing up,” said Mary Brett Whitfield, senior vice president with retail consultancy TNS Retail Forward in Columbus, Ohio.

Whitfield said consumers are moving down market for jeans. People who were premium jeans shoppers have turned to mainstream department stores for their denim, while middle-income customers who earlier shopped at department and specialty stores have moved to mass merchants and national chains such as Wal-Mart, Target, J.C. Penney and Kohl’s.

Diversified apparel giant VF Corp. reported that U.S. consumers trading down to lower prices were responsible for half of the 6 percent decline in jeans sales it experienced during the first quarter of 2008, a period when overall company revenue, including royalty income, rose 10.3 percent to $1.85 billion, buoyed by strong international sales. The rest of the falloff came from U.S. retailers reducing inventory, cold weather dampening sales and changes in product timing.

“There are people trading out of midtier to mass,” said Eric Wiseman, VF Corp. president and chief executive officer, in reporting quarterly sales, while also noting the lack of a “mass-herding mentality” to lower prices.

For the next three quarters, Wiseman said the company expects domestic jean sales to be flat or down slightly. As for the economy, he foresees no improvement until 2009, but also “we’re not expecting a deterioration.”

Marshal Cohen, chief apparel industry analyst at NPD, said mass merchants are in a good spot to pick up new business by carrying more fashionable jeans under $40 than before the downturn, he said.

“The lower end of the business will have fewer losers in this battle,” said Cohen, who expects the economy to pick up again in mid-2009. “The high-end will clearly go through some shake-up. There are just too many players trying to sell too much product.”

As examples of denim reinvention at the mass end, Whitfield cited $35 Converse One jeans sold at Target and $20 American Living jeans at Penney’s, part of a product line by Polo Ralph Lauren Corp.’s Global Brand Concepts and the first time Polo has created a brand exclusively for a store other than its own retail. Wal-Mart is also collaborating with Jones Apparel Group to sell the vendor’s under-$20 junior jeans L.E.I. brand starting in July and has hired photographer Peggy Sirota to shoot a magazine ad campaign with 18-year-old country music star Taylor Swift.

“There’s enough happening at the value and more popular-priced players in terms of new brands and new looks to capture attention,” Whitfield said. “The timing is very good.”

However, even with new fashionable jeans lines at lower prices, fewer pairs are being purchased across the board.

“Mass denim and premium jeans markets aren’t immune to the current economic environment,” said Ellen Basilico, a consumer consultant for Deloitte Touche. “You are going to see some decline in these markets along with the rest of retail.”

However, America’s love affair with denim is far from over, according to a Cotton Inc. survey of consumer attitudes toward shopping.

Bastos emphasized the mass sector, or jeans priced under $40, represents the largest segment of the U.S. jeans market, based on units, or 87 percent, according to 2007 figures. Jeans between $40 and $59.99 represent 7 percent of all units sold, and those costing $60 or more amounted to 5 percent. Of the higher tier, only 1.3 percent were jeans priced $100 and above.

At denim mills, the shift in consumption has meant some adjustments, as well.

“The business has been slowing for at least the last four to five months,” said Jack Mathews, vice president of fabric sales.

Denim customers “are all concerned we’re in a recession and how long it is going to last,” Mathews said. “Most of our customers have planned very conservatively, keeping inventories very low and turning their inventory more often.”

Such caution has also translated into denim orders for quick delivery of hot-selling styles. Mathews said his customers expect the back-to-school and holiday seasons to help reinvigorate the market.

“Most feel the June-December period will be stronger,” he said.

In addition, he said his customers are hopeful the federal government’s economic stimulus checks — $600 for adults and $300 for children — that began being mailed this month might be used in part to buy jeans.

“It wouldn’t surprise me to see an uptick in denim sales by the end of the year,” Mathews said.

The outlook for the denim market also is positive at Cone Denim, part of International Textile Group. Cone president Tom McKenna said in the last decade consumers have become more savvy about fashion denim, which is helping to steady the market in this economic downturn. He described denim sales as maintaining momentum.

“One of the interesting things about the last several years is how the premium jean segment has acted as a showcase for all consumers and how good jeans can look,” McKenna said. “It’s really created pressure at every price point from the midtier to mass channels for brands to improve the look and performance of their products.”