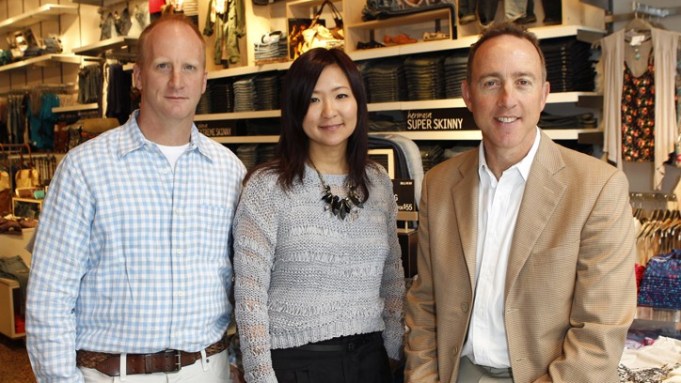 With the $1 billion company posting an eighth consecutive quarter of losses in August — and forecasting a ninth — he might have to give a few more.

Looking preppy in a white shirt, khakis and tan checked sports jacket, Schoenfeld stood near $49.50 patched and bleached jeans by Volcom, $99.50 nylon jackets by Ambiguous and $49.50 booties by Roxy at a PacSun store here in June and sought to pump up a dozen managers and executives.

“A picture is worth a thousand words,” Schoenfeld said. “Wow — in terms of product but now also in terms of the people standing here. We’re going to start doing good business and that’s going to feel great.”

It isn’t business as usual at PacSun, which along with the flow of red ink, had to fend off a hostile takeover bid last year by the much smaller athletic brand Adrenalina Inc. The recession has weakened the teen retail sector. There are fewer jobs for young people and their parents have diminished discretionary income. Apparel spending among 13- to 17-year-olds dropped 6 percent to $24.84 billion in the 12 months ended in June from $26.43 billion during the comparable prior-year period, according to The NPD Group.

In an effort to reverse its slide, PacSun has identified three key areas: product, customer relevance and engaging shoppers in stores. The turnaround blueprint includes pumping up the fashion quotient in juniors, reviving its shoe category and offering more exclusive items from vendors. After years of elevating its private label business, PacSun is courting vendors, including Fox, Volcom, Hurley, Quiksilver, O’Neill and Roxy, as partners for exclusive offers, in-store displays and events that are intended to lure shoppers from other mall-based competitors.

On Aug. 24, PacSun, seeking to differentiate itself, disclosed a deal in which it will hold exclusive rights as licensee to Mossimo Giannulli’s Modern Amusement brand for apparel, accessories and footwear through 2013, with an option to renew through 2020. With 880 stores across 50 states and Puerto Rico, Schoenfeld is turning to PacSun’s growing young men’s business, which is targeting an older, more sophisticated customer with more fashion forward merchandise, as a model for how to rejuvenate the key juniors category that is facing fierce competition from fast-fashion chains such as Forever 21 and vertical retailers, including Aéropostale and Hollister.

“PacSun, five to 10 years ago, had a phenomenal position with the teens,” Schoenfeld said. “We’re now working aggressively to reestablish that position.”

Schoenfeld, 47, a third-generation apparel executive, replaced Sally Frame Kasaks at Anaheim-based PacSun and is trying to lead the 11,000-employee company rooted in Southern California’s surf and skate culture out of its slump.

Before PacSun, Schoenfeld was co-ceo of Global Brands Group, a brand management and licensing company that is the worldwide master licensee for FIFA World Cup. He also served as president of Aritzia, a women’s fashion retailer in Vancouver, Canada, and, from 1995 to 2004, was ceo of Vans, a Cypress, Calif.-based skate brand now owned by VF Corp.

In fiscal 2009, which ended Jan. 30, men’s apparel comprised as much as 45 percent of PacSun’s business, with junior apparel contributing 43 percent and shoes, 12 percent. That compares with 38 percent for men’s, 33 percent for juniors and 29 percent for shoes in the 2007 fiscal year ending Feb. 2, 2008, when PacSun decided to close its nine-store One Thousand Steps footwear retail concept and phase out shoes and accessories.

Before 2007, accessories and footwear accounted for one-third of total sales. The company closed the 154 stores in its urban-inspired D.e.m.o. chain in 2008.

With a new juniors’ general merchandise manager, Christine Lee, 39, who had the same job at Urban Outfitters, PacSun is shifting its focus from basic fleece, T-shirts and jeans that appeal to 13- to 16-year-old girls to more trendy fashion that resonates with customers between the ages of 16 and 22. In addition to bringing back footwear, the junior department is relaunching its accessories business with $14.50 straw fedoras, $12.50 pleather clutches and $10 patterned tights.

“They want to have something more special,” said Tiana Becker, sales manager for juniors at Fox Head, a Morgan Hill, Calif.-based motocross brand that is sold at PacSun. “Obviously, it’s been a very difficult market with fast fashion and price points.”

Becker said Lee and her team sought special details such as dolman sleeves, oversize hoods, shirring and elongated cuffs on fleece tops. PacSun will devote a wall fixture and mannequin to Fox’s junior fashion during the Black Friday shopping weekend in November.

“We need to step it up,” Becker said. “They ask for more [fashion] from all the vendors.” Speed to market is crucial. After betting heavily on skinny jeans and missing out on the trends for distressed jeans, boyfriend dungarees and tops last year, PacSun is trying to make itself more nimble to better chase quick-selling items. Back-to-school collections were shipped to stores four to six weeks later than last year.

“Fast fashion is a component of the business,” Lee said, noting that PacSun is appealing to customers who want to buy now and wear now rather than saving an item for when the season changes. “Even with our layering pieces, like button-ups and sweaters, they’re lightweight so it’s ‘buy now, wear now.’”

Since the beginning of this year, PacSun also began emphasizing region-focused purchases for its stores, vendors said. For example, customers at its Hawaiian units can buy boardshorts year-round and East Coast shoppers are able to purchase outerwear when the temperatures drop in the fall.

In addition, PacSun executives said they want to shorten the period between design and delivery. For PacSun’s private label business, it takes about eight months to design a piece and deliver it to stores. The wholesale calendar, on the other hand, ranges between nine months and a year.

“It’s not responsive enough,” Schoenfeld said. “If we can speed that up, it’ll create more opportunity for the branded [wholesale] business.”

PacSun is turning its attention to vendors after years of focusing on its private label. The company’s proprietary brands accounted for about 48 percent of total sales in 2009, up from 30 percent in 2007. PacSun said vendors will continue to contribute to more than 50 percent of its men’s merchandise and the mix of women’s products will vary depending on the trends. The company narrowed some of the categories in its private label business. For example, it stopped making its own men’s boardshorts.

“L.A. is a very dynamic market from a fashion perspective,” Schoenfeld said. “Christine is having fun conversations about which brands to consider.”

Among the labels that PacSun is stocking for the first time is Insight, a surf brand from Australia that is known for its edgy designs as much as for its irreverent marketing. Among the fashion-forward women’s pieces that PacSun ordered from Insight is a clingy jersey dress with a mesh back.

“We want to project the right age group,” Lee said. “We were just really too young and really didn’t have the fashion proposition. We want to be in the business of fashion.”

Schoenfeld and Lee appear to be taking PacSun in the right direction, said Linda Tsai, senior analyst at MKM Partners in Stamford, Conn., who covers specialty retailers, including teen and children’s companies.

“It should be an improvement,” Tsai said. “[Lee] knows the older teen girl better. It probably makes sense for her to concentrate in that area that potentially might have more money, more disposable income. [With] the younger girl, there’s been a lot of competition, especially from Aéropostale, and Aéropostale has been gaining a lot of market share. It’s hard to compete in that area unless you’re going to be price-focused.”

Collaborating with action sports brands is one way to edge out the competition. In June, PacSun staged its first public party, called Ballyhoo, a two-day event at the beach in Santa Monica, Calif., featuring live performances by buzzworthy bands such as Matt & Kim and booths hosted by WeAretheSuperlativeConspiracy, Vans and 11 other action sports brands. After giving away 40,000 free tickets for Ballyhoo at its stores and tallying 120,000 views of live Webcasts from the event, PacSun said it will invest in a second Ballyhoo next year.

“[Ballyhoo] was really important on a number of different levels to re-engage the brands,” Schoenfeld said.

PacSun is blending music and exclusivity in its products, as well. In July, surf brand Rusty began selling men’s and women’s hoodies designed with art from the rock band Green Day and washable headphones that can plug into iPods and other digital music players.

Hurley, the action sports brand owned by Nike, collaborated with the band Weezer to launch their new album at PacSun on Sept. 10 before the band released the music elsewhere four days later. Weezer also helped design a nine-piece capsule collection, featuring graphic T-shirts and a black puffer jacket that pops with white, green and lime yellow panels, which will be sold only at PacSun. Between Sept. 10 and Oct. 15, shoppers who buy a Hurley or Weezer product at PacSun can enter a contest to have Weezer play at their school.

Schoenfeld “understands the scope of how a big band plays and its connection with kids,” said John Cherpas, senior vice president of global merchandising and design at Costa Mesa, Calif.-based Hurley.

“He just embraces brands,” added Charlie Setzler, president of Rusty in Irvine, Calif. “He understands there is a heritage, an authenticity to having brands in stores. The consumers look for that and it’s real.”

“If you’re a high school student or college student, your new year really begins in September,” said Robert Cameron, 50, senior vice president of marketing, who joined PacSun from Levi Strauss & Co. in January. “The fall is a time for renewal.”